But head coach Steve Swanson knows there is a lot of work to get done before that can be accomplished.

“Sometimes, you can get carried away with results,” Swanson said downplaying the two victories. “Right now, it is more about the performance than the results for us.”

The coach called the performance ‘inconsistent’ during a 3-0 win over China on Sunday, as he continues to examine his roster with these training camps.

“Overall, I think we got a lot accomplished this week,” he said. “From a physical standpoint, we have a better idea of where we are at and where we need to go. From a technical standpoint, I think the same thing. We are still coming together as a team.”

Prior to the CONCACAF Championship, which serves as the World Cup qualifiers for the region, the U20 WNT had spent three months together. The coach thought that the brief break apart following the event in Panama did a lot of good for the group. 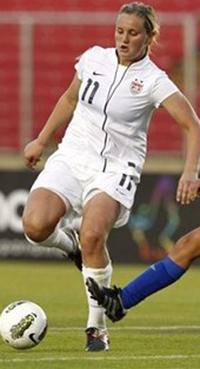 “We came in a little fresher,” Swanson said. “I think we got a lot out of this camp even though it was only a week.”

For the coaching staff, the main takeaway may be the roster, as the World Cup roster is limited to only 21 players so there is a lot of consideration that goes into every spot on the team.

“We are still evaluating our roster from top to bottom,” he said. “I think we will be making some adjustments and some new call-ups for this next camp in May.”

Even though there are only four months to go until action kicks off at the 2012 U20 Women’s World Cup in Japan, the coach said that the competition for playing spots has remained pretty much the same from other camps, which is a reflection of how difficult it has been to make this team since the start of the cycle.

“I think anytime you are in with the national team it is really about your performance,” Swanson said. “It is about being prepared. It is the highest level. It is always going to be competitive especially on these youth national teams because things change so much.”

The pressure is on the players now to keep up the level when they are out of camp. The coach added that these times are just as critical to the success of the team at the World Cup, as when the team is in camp.

“I think the biggest now is what we are going to get done during the times we are apart,” Swanson said. “I think that is something these players have to understand; it might be a more critical time than when we are together.”

In the past, Swanson has avoided the tag of favorites for the World Cup. That did not change at the end of the camp on Sunday, as he continued to say the competition would be very tough at tournament.

“Come August, we know we can play with anybody,” Swanson said. “But it is a whole new thing at the World Cup, so you have to play a consistent 90 minutes because all those opponents are good.”