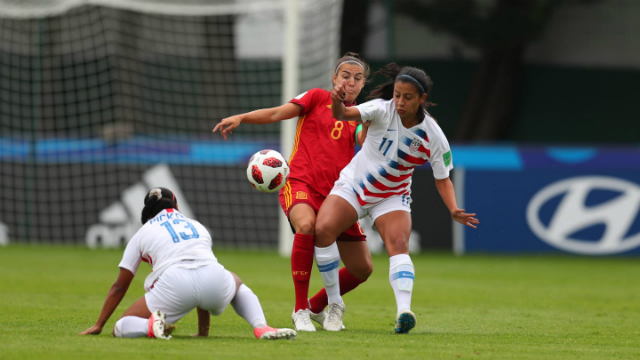 The warning signs were there during World Cup qualifying.

And yet the U.S. Under-20 Women’s National Team faltered again, drawing 2-2 against Spain to end their 2018 run at the Women’s World Cup. The result left the U.S. in third place in Group C, with Spain and Japan advancing to the knockout rounds.

Down 2-0, the United States showed character and determination in a game where they were outplayed and out possessed for long stretches of the match to nearly squeak through. After Sophia Smith’s goal made it 2-1 in the 83rd minute, the frenetic state opened the door for the U.S. to nearly come all the way back and win.

Against a Spain midfield (and team collective) that was unflappable under pressure, the United States chased shadows for significant portions of the game. The U.S. offered moments of danger, but two first half goals were just enough for Spain to withstand the USA’s late rally.

The first came in the seventh minute. Midfielder Jaelin Howell was positioned to collect her cross off the line. But her rushed clearance went straight to the feet of Patricia Guijarro at the top of the box. She lashed home the opener into the far corner.

Conceding an early goal failed to invigorate the U.S. side, however. Spain controlled possession for long portions of the game, keeping the foot on the pedal. Sharper decision-making in the final third might’ve added a second or third at that point in the match.

The second finally came in the 42nd minute. A set piece delivery wasn’t handled, and forward Lucia Garcia pounced on it, making it 2-0 on a shot that bounced through the hands of U.S. goalkeeper Laurel Ivory.

Unlike Spain’s collective, U.S. attacking moments relied on individual moments. Whether from Smith, Abigail Kim or Erin Gilroy on the flanks, those failed to materialize for long portions of the game. With just under 10 minutes left, the U.S. comeback shot to life.

Smith delivered the first U.S. goal in the 83rd minute. After Gilroy was fouled just outside the box, Smith’s right-footed set piece through traffic found the bottom corner, making it a 2-1 game.

As the U.S. pushed numbers forward looking for goals, Spain had a chance to add a third a minute after the goal. But Guijarro, played in on Ivory, fired a shot well wide of the target.

That miss proved to be critical for Spain when the United States found the equalizer through Savannah DeMelo. The midfielder’s shot from distance took a fortunate deflection, making it a 2-2 game.

Ivory handed Spain a chance to win it early in stoppage time, when her pass out of the back went straight to a Spanish attacker, who fired wide again. But the U.S. onslaught came up just short, and Spain scraped through in the end with the 2-2 draw.