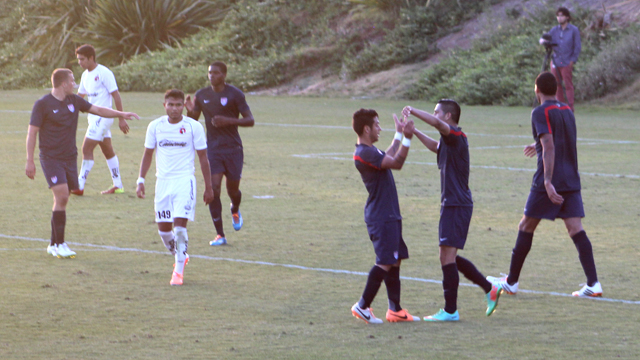 The U.S. U21 Men’s National Team camp started on Sunday and ended on Thursday, but it concluded with a bit of honey as the youth national team defeated Club Tijuana 2-1 on Wednesday at the National Training Center.

“Very happy [with the game]. We only had two real training sessions before the game,” Youth National Team Technical Director Tab Ramos told TopDrawerSoccer.com. “It was really good for us to get the group together and see where everybody is.”

Chicago Fire midfielder Benji Joya scored both goals as the U.S. snagged the win against the youth/reserve team from the Liga MX club. U.S. U20 MNT forward Amando Moreno scored for Tijuana as he along with fellow youth national team standout Paul Arriola featured prominently for the visitors.

“It is great to see them again – and I saw those guys just five days ago in Dallas,” Ramos said about Moreno and Arriola. “It is excellent and I know this Tijuana team does a real good job of developing their players and I’m happy to see them there.”

The U.S. dominated the possession in the opening minutes with Joya, Colin Martin, and Marlon Hairston playing simple, clean passes through the midfield. The U.S. lacked a real threat in the attack though and was unable to break down the back four of Tijuana.

The game took a turn in the 22nd minute when Cruz Azul forward Jose Villarreal put a cleats first challenge into a Tijuana defender. Villarreal received the first yellow card of the game for his part of it.

Tijuana took some exception to the challenge and quickly retaliated with a pair of fouls that resulted in yellow cards as the first half turned into an exercise of the referee’s whistle.

One opportunity did emerge from the stop-and-go traffic in the 33rd minute when the Xolos earned a dangerous free kick about 20 yards from goal. The shot from the dead ball caught U.S. goalkeeper Jonathan Kempin in no-man’s land, but it hit off the post and was cleared from danger.

As the opening 45 minutes came to a close, Arriola began to assert himself more and more on the right flank as the speedy winger tried to break free of his mark and operate in space. The service to Arriola was a second slow on most occasions, but the teenager left an impression on the crowd in the 40th minute when he brought down a 60-yard pass out of the air with his first touch and beat his defender with his second. Christian Dean eventually knocked the ball off of Arriola’s foot, but the moment of brilliance was a bright spot in the first half that did not see either goalkeeper tested.

The U.S. brought the excitement in the second as the relentless attack of Jordan Morris and Sean Okoli on the wings introduced some life to the game. Okoli provided a golden chance for Jack McBean in the 53rd minute when he whipped in a cross to the open LA Galaxy forward but the Tijuana goalkeeper was in the right position and turned away the volley with a good save.

Three minutes later, U.S. opened the scoring when Joya hit a well-placed shot in the lower corner of the net that that goalkeeper did not see until the last second and could not reach in time. Stevie Rodriguez provided the assist on the play.

Xolos came close to punishing the U.S. on the ensuing kick off as a Tijuana forward snuck in between Dean and Dillon Serna, but his shot went well over the bar.

U.S. regained control quickly after the mental lapse and began to exploit the advantage on the wings. This time it was Morris who took control of the game.

Morris skated past his mark near the end line and played the ball back to the top of the six for McBean, but his shot sailed over the bar. Seconds later, Morris beat the offside trap on a ball from Joya and tried to cross it to Okoli but his initial effort was blocked. The Stanford forward followed up and drilled his shot at the near post, but it hit off the post and was cleared for a corner.

The U.S. onslaught did not end there. Joya delivered a service on a silver platter that Okoli soared through the sky to meet but his header went inches over the crossbar.

Joya kept the foot on the gas pedal for the U.S. and again facilitated a golden chance with a cross into the perfect spot. This time, McBean did well to whip his head around it and fire it low, but the Tijuana keeper made an excellent save.

With nine minutes left, Moreno put Tijuana on the board when he finished a cross after some sloppy marking. The service came from the left side and eluded two defenders before Moreno knocked it down to himself and then smashed it in from about six yards out with the help of a friendly ricochet.

“I think the game went okay. I felt like we organized well and we defended well,” U21 MNT goalkeeper Kendall McIntosh told TopDrawerSoccer.com. “Overall, it was a solid performance. For me personally, I conceded the one goal on the deflection but everyone played well and the goal was not indicative of the game.”

Moreno broke free again eight minutes later, but McIntosh was quick off his line and knocked the ball off the foot of the former New York Red Bull attacker. The second effort went over the crossbar.

With only seconds remaining, U.S. found the game-winner. Alejandro Guido hit a free kick from 30 yards out that found Morris wide open near the top of the 18-yard box. Morris’ header hit off the post and Joya finished the rebound into the empty net.

The referee blew the final whistle on the ensuing kick off as the U.S. snagged the 2-1 win.