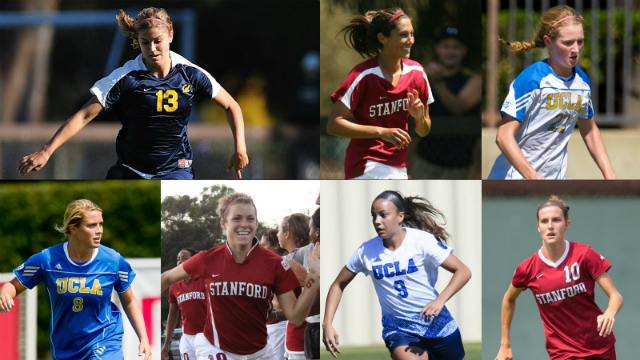 Last Thursday, head coach Jill Ellis announced the U.S. roster for this year’s World Cup, as the U.S. seeks to defend its crown in France later in the summer.

Twenty-one of the 23 players all have one thing in common: they played at least three seasons of college soccer.

Take a look back at each player’s time in college, where they competed and their accomplishments on campus.

Adrianna Franch, Oklahoma State – With just one cap heading into the World Cup, it’s going to be interesting to see if Franch can carve out any time in France. She played at Oklahoma State from 2009-12, leaving as the program’s all-time shutout leader with 38 clean sheets, good for sixth in NCAA history.

Alyssa Naeher, Penn State – During her four-year career in State College from 2006-2009, Naeher made 74 appearances, securing 24 shutouts for the Big Ten program.

Abby Dahlkemper, UCLA – The center back featured in Westwood from 2011-2014, finishing her senior season as the Pac-12 Defensive Player of the Year. She was the cornerstone of the program’s 2013 national championship triumph, making 93 appearances in college.

Tierna Davidson, Stanford – After leaving Stanford at the end of her junior year last fall, Davidson secures a spot after getting picked No. 1 overall by the Chicago Red Stars in this year’s draft. An injury limited her to three appearances in 2018, but she was a stalwart in defensive midfield and center back during her three seasons in Palo Alto.

Crystal Dunn, North Carolina – It was a very successful four-year career at UNC for Dunn, who played from 2010-2013 in Chapel Hill. She was part of the program’s 2012 national championship, and the most recent Tar Heel on the World Cup roster.

Ali Krieger, Penn State – The longtime veteran was one of the surprise inclusions on the team, although she’s played in two World Cups and was part of the 2015 triumph. Kreiger played for the Nittany Lions from 2003-2006, making 94 appearances during that time.

Kelley O’Hara, Stanford – One of the best college players from her time at Stanford from 2006-2009, O’Hara finished her college career with 26 goals and 13 assists for the Pac-12 program, earning the Hermann Trophy her senior season.

Becky Sauerbrunn, Virginia – Sauerbrunn was a key defender for the ACC school from 2003-2007, making 90 appearances. During the 2004 season, she took a redshirt to compete with the U.S. U20s at the FIFA World Championships.

Emily Sonnett, Virginia – A midfield/defender in college, Sonnett finished her career as one of the best central defenders in Division I soccer in 2015. From 2012-2015, she made a total of 97 appearances, helping Virginia reach the College Cup in 2013 and 2014.

Morgan Brian, Virginia – Her four seasons at Charlottesville could hardly have gone better, save for coming up short of a national championship. Back-to-back TopDrawerSoccer.com Player of the Year and MAC Hermann Trophy winner in 2013 and 2014, injuries have held back the midfielder during her professional career.

Julie Ertz, Santa Clara – A highly-decorated player from 2010-2013 for the WCC power, she made 79 appearances during her time with the Broncos.

Lindsey Horan, N/A – The Portland Thorns midfielder is the lone player on the roster not to join a college program at any point (Mallory Pugh enrolled at UCLA and left school early to turn pro). Horan bypassed a scholarship chance at North Carolina to play at Paris St. Germain.

Rose Lavelle, Wisconsin – The attacking central midfielder’s another player that’s managed through some injury issues to make the World Cup squad. She played from 2013-2016 for Wisconsin, scoring 22 goals, adding 24 assists in 84 games.

Allie Long, Penn State/North Carolina – Another midfielder looking to make a case for playing time in France, Long’s college career (spanning from 2005-2008) she started at Penn State during her freshman and sophomore seasons before finishing it off in Chapel Hill.

Sam Mewis, UCLA – Dahlkemper’s teammate from 2011-2014, Mewis anchored the 2013 title-winning side during a stellar career in the Pac-12. She made 87 appearances during that four-year stretch.

Tobin Heath, North Carolina – A key part of one of UNC’s most successful runs, Heath helped the Tar Heels to national championships during three of her four seasons at the ACC program, where she played from 2006-2009.

Jessica McDonald, Phoenix College/North Carolina – Arguably the best story on the roster, McDonald played her first two years of college soccer at Phoenix College as a freshman and sophomore. She transferred to UNC for her final two seasons, winning national championships in 2008 and 2009.

Alex Morgan, California – Having recently reached the century mark for the U.S. women’s national team (101 goals in 160 games), Morgan continued what she started at Berkeley from 2007-2010. She scored 45 goals in 67 appearances at California, starting to make full team appearances before her time in college ended.

Christen Press, Stanford – One of the best attacking players in college soccer over the past 15 years, Press smashed school records at Stanford, setting career marks in points (183), goals (71) and assists (41). She helped the Cardinal reach the College Cup in three straight seasons from 2008-2010. They finished as national runners up twice in 09 and 10, before winning it in 2011, after Press had graduated.

Mallory Pugh, UCLA – After coming close to skipping school altogether, Pugh enrolled at UCLA for a short time, never appearing in a competitive game for the Bruins before turning pro and joining the Washington Spirit.

Megan Rapinoe, Portland – In some ways, it’s amazing that Rapinoe’s enjoyed the sort of career longevity after tearing her ACL twice in college. She played for the Pilots from 2005-2008, earning just about every individual award possible her freshman season. In 2006 and 2007, she suffered season-ending ACL tears, limiting her to just 60 games during her career. Despite that, she mustered 30 goals and 28 assists during her time at Portland.