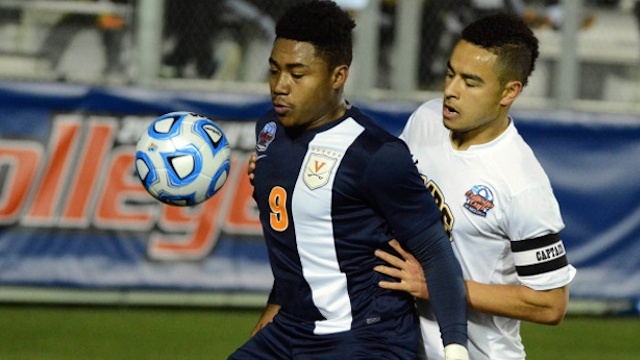 CARY, North Carolina — It’s been an admittedly rough season for Virginia forward Darius Madison. After firing in six goals in 2013, Madison tweaked his ankle in the first week of the preseason and missed a chunk of the season. And even after he returned, it took him time to work up to full speed, and he had half his goal total from last season entering the College Cup.

If Friday is any indication, Madison is back. And his timing couldn’t be better.

Madison scored in the fifth minute to lead Virginia to 1-0 win over UMBC on Friday in the College Cup semifinals. The Cavaliers lost at this stage last season and haven’t been to the finals since they won their sixth national title in 2009. Thanks to Madison’s complete day and a brutally efficient defensive performance, Virginia is hunting a seventh.

Virginia faces UCLA here at noon Sunday for the national title. It’s a rematch of the 1997 title game the Bruins won 2-0.

Virginia’s tally was the first the Retrievers had surrendered since Nov. 15, and the first in an away NCAA tournament game in a staggering 793 minutes. This postseason, UMBC became the first team in history to win four consecutive NCAA tournament games on the road without conceding in any of them. And Virginia’s goal was even more surprising because it came so early, especially considering the Cavaliers hadn’t scored that early in a match all season. That flipped the narrative on its head and forced the defensive-minded Retrievers into a more proactive stance.

“We have not played a team in a while that has dropped back that early on us,” said UMBC coach Pete Caringi, who made his first College Cup appearance in his 24th season with the Retrievers. “They gave us a lot of time. In the locker room before the game, we told our group to play the game at a high pace like we did in the second half. We came out very slow, and they caught us off guard. We were hesitating, slow, and it cost us.”

The crucible of UMBC’s strength was its undoing nearly as soon as the game started. The Retrievers have been so good defensively primarily because it limited mistakes in its own half to minuscule proportions, but a monster miscue inside the first five minutes gifted Virginia its deadliest and most productive scoring chance early.

Virginia’s Pablo Aguilar stripped Marquez Fernandez about 30 yards from goal, and a few touches later he led in senior striker Darius Madison behind the Retrievers’ robust defensive shelf. Madison uncorked a low-skimming sidewinder that beat Billy Heavner to the far post for a shock early goal in the fifth minute. For a game that most expected to be a close-fisted defensive battle between teams that do more sitting back than pushing forward, it was a surprise opening act.

For Madison, the feeling was relief.

“It was a big load off my shoulders,” said Madison, who got his fourth of the season on Friday. “The season’s actually been pretty rough for me. Coming in I was really focused and excited for the season, and I sprained my ankle in the first preseason game. It was a shocker. It hurt, but George is always telling me to keep focused and to keep working hard and it’ll happen.

“It took a while, but it eventually happened.”

UMBC had five corners by the time Virginia earned its first five minutes into the second half. The final disparity was 9-2 in UMBC’s favor. That was indicative of the kind of quick-trigger pressure the Retrievers applied, but it also illuminated their inability to convert off set pieces and their plethora of chances on crosses. Virginia’s lockdown defense helped sweep up the Retrievers’ normally effective set piece game and kept box specialist Oumar Ballo from converting on a dead ball.

“I thought those played out well defensively for us,” said Virginia keeper Calle Brown. “Our guys have been pretty good in the playoffs on set pieces and defending them. I only had to come for one or two. We did really well on clearing those up the first time and then getting the second ball out too.”

Over the final 15 minutes especially, Virginia gradually retreated its midfield and popped the odd chance over the top to Madison. That left UMBC with the lion’s share of possession, but the ball simply wouldn’t carom in its favor.

“The ball just didn’t bounce our way,” said UMBC forward Kay Banjo. “Clearly they sit back a lot and that showed the whole game. The ball always bounced their way, even when we thought we were about to get a chance and we couldn’t do anything about it.”

On Sunday, Virginia chases history. Only Saint Louis (10) and Indiana (8) have won more championships than Virginia, and the Cavaliers can pull themselves to within one of Indiana with No. 7 with a victory to banish the ghosts of 1997.