Morgantown, WV – West Virginia beat VCU 3-1 on a windy, sunny cold day.  These teams are similar – VCU reminds me of West Virginia 2 years ago.  West Virginia was much sharper and experienced against a young Virginia Commonwealth team.  More than ½ of the VCU starters on the day were freshmen.

Today we’ll look at VCU, and tomorrow the spotlight will be on West Virginia.

Virginia Commonwealth: 4-4-2. The midfield is configured differently than many other teams.  According to VCU Coach Dave Gifford, Solano is supposed to be a back – but he doesn’t get back to be a back.  Haboush is more of an attacking midfielder or possibly withdrawn forward supporting Johnson and Mwila.  Shiffman connects with the defenders, getting ball wide to the overlapping wide backs or more likely finding the more advanced midfielders/forwards.  Bowie has more fluidity getting around the field, but can be counted on to man the central defensive midfield.

VCU lacked organization.  An early West Virginia goal opened the game up with a 2 goal deficit.  On a short corner with 2 attackers, the defending team must send out 2 defenders.  Virginia Commonwealth didn’t do this and West Virginia scored on a scorching shot early in the game.  After the game, VCU Coach Dave Gifford stated that a player is supposed to slide out.  This same problem re-occurred in the second half, but without a goal being scored.  I suspect that if this continues, that player shouldn’t be surprised to be sitting next to Gifford in the fall. 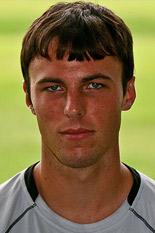 Brady Seymour
Late in the second half, VCU got on the board with a Brad Seymour goal.  The play started with West Virginia left back Francis Molasoko trying to get the ball up the field but it was picked off by Nick Rich.  Rich drove to the end line and crossed the ball to Seymour in the box who headed it in from 6 yards.

Rich has good speed and he’s a terrific crosser.  He was terrorizing Molasoko up the line, getting to the end line and sending in terrific balls.  Rich is a solid defender and a fiery leader demanding his teammates play smarter, harder and with purpose. I like him.

It was painful to watch Jason Johnson move.  After being such a powerful runner last fall, he struggled to accelerate.  While he played 75 minutes, he was struggling with a hamstring injury – I would have liked to see him a little less, today.  When he’s healthy, he reminds me of Jozy Altidore with his speed and power.  Today, he made me think of Josie and the Pussycats.

VCU’s success will be stunted if they don’t upgrade the goalkeeper position in the fall.  Josh Pantazelos is adequate, but he doesn’t make the big save to keep his team in the game.  On the second goal, a quality goalkeeper would have deflected the rocket. 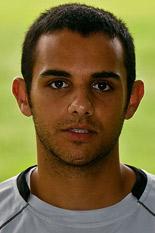 Haboush makes good decisions on the ball.  In the 29th minute, he wanted to get the ball to Yoram Mwila, but Haboush realized that Mwila was in an offside position.  So Haboush unleashed a shot.

Mwila scored a goal, but it was disallowed because Mwila was offside, once again.  In the 43rd minute, Mwila stood around instead of making a supporting run into space (in an onside position).

Garrett Harvey was legitimately called for the penalty kick in the 87th minute. Harvey is good in the air, but his passing out of the back needs to be tighter.

Incoming freshman Juan Monge Solano has sweet cross with precision, pace and vision.  Solano is easy to find manning the sidelines, because he doesn’t move.  The ball kid worked harder. Solano is a defensive liability – Ray Gaddis went by him like he was standing still (which he was).