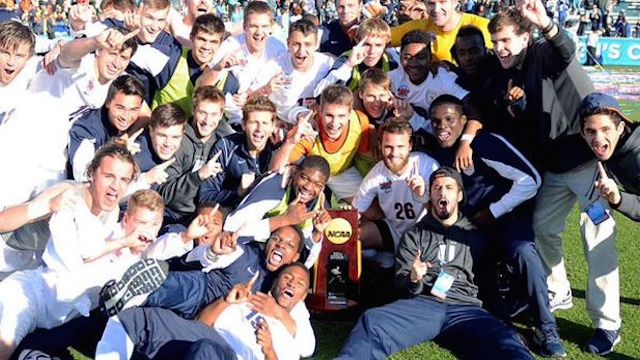 CARY, North Carolina — Virginia took punch after punch from UCLA all afternoon. The College Cup final was almost unimaginably one-sided, with the Bruins pinging around possession outside the box and Virginia bunkering to avoid surrendering a goal.

Virginia utilized a decisively defensive approach to shut out UCLA over a scoreless 110 minutes, and a 4-2 result in penalties clinched by a down-the-middle kick from Riggs Lennon gave the Cavaliers their seventh national title. All of those have come in the last 30 years, the most for any program over that stretch of time. Virginia also became just the second No. 16 seed, the lowest in the field, to win the national title after Indiana did it in 2012.

The title was Virginia’s second under George Gelnovatch since 2009, and it distantly avenged a title game defeat to UCLA in 1997. Calle Brown, Virginia’s outstanding keeper who influenced both of UCLA’s PK crossbar misses with his height, walked into the postgame press conference with both of his keeper gloves still on.

“I’m never taking these off,” he said.

Virginia’s steely resolve in penalties outlasted a UCLA team that totally bossed play in regulation and, as a result, was denied its fifth national title and first since 2002. After the game, UCLA coach Jorge Salcedo said it felt at times like Virginia had parked “two buses” in front of goal. At the same time, the Cavaliers rarely went on forays forward, choosing instead to drop nearly every outfield player behind the ball on most occasions. UCLA was unable to break apart that kind of defensive dedication, which ultimately sent the match to penalties.

For a UCLA team that’s seen its fair share of bunkering defenses this year, this level of defensive resolve was above and beyond.

“I told (center backs) Edgar (Contreras) and (Michael) Amick in the back that we didn’t really have to do much, especially in the first half,” UCLA keeper Earl Edwards said. “That was almost exactly what they wanted. The fact that we didn’t get a goal in the first half, I told these guys that was a decent half for us but a perfect half for them. That’s all they wanted.”

As to whether or not Virginia was playing for penalties, Gelnovatch certainly didn’t think so.

“There’s not a time that I wasn’t thinking we’ll catch them on a restart, or we had a little play at the end of regulation with a handball that I thought wasn’t called,” Gelnovatch said. “They got a chance to scout us, and they did a very good job of when we did try to come out and counter of getting around us. So the chances weren’t quite as much, and they were also a very, very good team. I don’t think anybody plays for a tie. When you get to the last minute of the second overtime, it’s going through your head a little bit.”

Once the teams marched through one-sided regulation and a pair of relatively quiet overtimes, a College Cup final descended into penalties for just the fourth time in history. Three of those have now involved Virginia.

In a repeat of their 2009 title, the Cavaliers once again won it in the penalty round. Todd Wharton and Brian Iloski traded successful penalties in the opening round, and neither team scored in the second after Edwards pushed out Scott Thomsen’s effort and Gage Zerboni’s clanked off the crossbar. After Virginia’s Sam Hayward hit his shot in the third round, Willie Raygoza hit the crossbar again. That put Virginia on track, and conversions from both Patrick Foss and a final calm kick from Lennon set off the mad celebration.

“I didn’t really think about it until afterwards, when I turned around and was just like, ‘Oh my God, we just won a national championship,’” Lennon said.

UVA set up in two banks of four and hunched into a defensive posture for a mostly drab affair punctured by very brief moments of clarity. Virginia mostly locked itself in its storm shelter and dared the UCLA tornado to unhinge the door. The Bruins were unable to comply despite utter domination on possession. It took 35 minutes for Virginia to register a shot, and it was a 30-yard free kick Thomsen floated well wide. Virginia’s only shot on goal in the opening stanza was another speculative free kick Todd Wharton rifled into Earl Edwards’ chest minutes before halftime.

UCLA had two very good chances via Larry Njdock in the second half and Abu Danladi in the first overtime, the latter of which was a flubbed shot on a bouncing ball inside the box with nobody in the immediate vicinity. UCLA had more meaningful cracks on goal than Virginia, which didn’t have any, but the Bruins couldn’t punch the game’s release valve.

“Our chances were there,” Salcedo said. “We had our chances. Even though you don’t a ton of shots on the stats, you don’t see a ton of saves from the goalkeeper, I thought we had three chances. When you have three chances and the other team has zero, there’s a good chance you can win the game. We just didn’t.”

For most of the game, Virginia was set so deep it couldn’t even play on the break. As the game tailed off in the second half and then overtime, Virginia dropped at times into a flat seven-man back line to keep the Bruins’ probing midfield from finding alleys in the box. The Cavaliers invited UCLA forward with lax pressure in the midfield and then continually rebuffed its efforts from a back line that earned its postgame celebration.

“It’s easy for me to really delve into the negative tactics, but it is what it is,” Salcedo said. “It was very difficult to break down.”

The game finally found a semblance of a pulse in the 85th minute when the emotion of the stage began bubbling up. Seconds after Contreras and Virginia forward Darius Madison were assessed matching yellows for some physical sparring, Virginia won a corner inches outside the box. Thomsen’s effort flew right into Edwards’ hands, but even that moment was an improvement on a match that never quite found its legs.

“It was a little nerve-wracking,” said Virginia central defender Kyler Sullivan, who was named to the all-tournament team. “But with the guys I have behind me and next to me and in front of me, I knew if we just absorbed, absorbed, absorbed until we had to, until that clock ran out and went to PKs, we’d be able to get it to them and get this championship.”

Eric Bird’s vantage on this title was unique. The senior leader, widely regarded as Virginia’s best player, had missed much of the last month with a groin injury, and he only entered the final with 25 minutes left in the second half. His first touch was a perfectly weighted ball that led in Ryan Zinkhan for a shot and Virginia’s first corner. He came off seven minutes later with an ankle tweak and then came back on for the extra periods and penalties.

Bird may jet off to MLS in next month’s draft alongside UCLA’s Leo Stolz, who said after the game he’d also like to enter MLS. But for now, he’s basking in another championship for one of the nation’s most storied programs.

“It means the world,” Bird said. “Just looking around and hugging those guys afterwards and just realizing what you just accomplished, especially with this group of guys. We talked about it before the game, that we might not be the most talented team, but we were the best team (in terms of) camaraderie and togetherness. This was the closest team that we’ve seen in college soccer.”