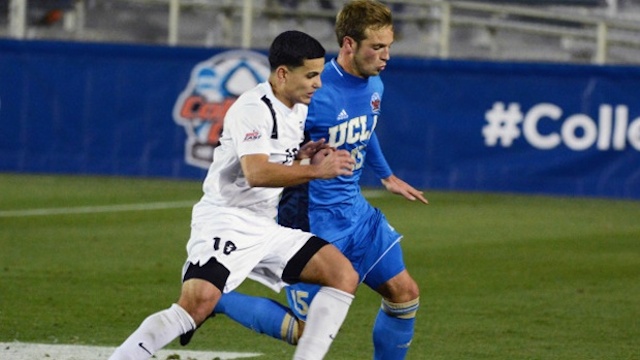 CARY, North Carolina — The gravitational pull of success commanded by the 2014 College Cup final is unparalleled in the history of the competition. Since the tournament started in 1959, two teams have never met with a combined 10 national titles between them. That changes on Sunday. With Virginia’s six titles and UCLA’s four, the College Cup has two representatives in the top four of the most national championships in men’s soccer history.

Forget about Cinderella. This year’s College Cup final is shattering the glass slipper to pieces. When Virginia and UCLA meet a noon Sunday at WakeMed Soccer Park, two of the giants of college soccer will bring a raft of history in tow. Namely the ghosts of the 1997 final, which UCLA won over Virginia 2-0. These two programs have won a title apiece since then, UCLA in 2002 and Virginia in 2009.

There’s so much history between these two programs that both coaches have their own rolodex of memories. Virginia’s George Gelnovatch and UCLA’s Jorge Salcedo both played at their respective schools, so this rivalry goes deep. In fact, Salcedo can remember a time in 1990 when he had a friendly wager with a few Virginia players who were teammates with the national team. Salcedo argued that when their careers had wrapped, UCLA would have more national titles than Virginia.

“It’s pretty ironic that, here we are, this college cup—us against Virginia—they have six, we have four,” Salcedo said. “I absolutely want to get us our fifth. I admire Bruce Arena for all that he did for Virginia and all he’s done with the national team. If I could could’ve picked one team to play against it would’ve been Virginia because of the history we have against them, the absolute respect I have for their program—they’re one of the best programs in the country—and so are we. We’d like to get closer to their six national championships by winning tomorrow.”

While it’s true that Virginia enters this year’s competition with more historical and recent College Cup success, the Cavaliers have had a tougher road here. Virginia lost five games in the regular season and was trounced 3-0 by Notre Dame in the second round of the ACC tournament. The Cavaliers entered the NCAA tournament 2-3-1 in its previous six, and it slid into the No. 16 seed, the lowest in the field. Further, a possible matchup with Notre Dame awaited in the third round.

Meanwhile, UCLA’s taken the traditional path of the favored juggernaut. After some early struggles that included a loss to American, the Bruins are 9-1-1 in their last 11, which encompasses a five-game winning streak and a Pac-12 title. And while the Bruins’ defense has been unable to post a shutout since a 3-0 win over Oregon State on Oct. 19, the attack has been the nation’s best when it’s counted.

“I think they’re a very good team,” Gelnovatch said. “I watched their match after we wrapped up and it was refreshing because there weren’t a lot of fouls and there was a lot of good passing. Not every match is like that, but I think you’re going to see good soccer tomorrow. We’re both possession-oriented teams and we both have skilled players that play a good brand of soccer that should make for a good matchup.”

Gelnovatch largely concealed his tactics for UCLA, but it’s hard to imagine the Cavs not sitting back and leaning on a defense that’s suddenly a world beater in front of accomplished keeper Calle Brown. Since that crushing loss to Notre Dame, which forced the team to scramble to find some answers, Virginia has surrendered just two goals in its last four games. UCLA, meanwhile, possesses arguably the most dangerous attack in the nation. Even though prized senior midfielder Leo Stolz didn’t enjoy his most offensively productive game during UCLA’s 3-2 double overtime win over Providence in the semifinals, the attack ticked over anyway.

Directly following UCLA’s semifinal win, defender Chase Gasper, whose goal won the Bruins the game, doused kerosene on the rivalry when he addressed his history with Virginia. The Virginia native was originally committed to play for the Cavaliers before switching to the Bruins on the eve of signing day earlier this year. Gasper’s comments, which were delivered with a wry smile, seemed to reference something deeper.

“It’s actually a dream come true playing against them,” said Gasper, who rattled off a laundry list of players he knew from his club playing days back home. “I was committed there originally, and it happened that I ended up at UCLA. Very happy that I ended up at UCLA, and really looking forward to Sunday’s game.”

When asked whether or not there was any animosity from that recruiting process, Gasper paused long enough that Salcedo stepped in and answered in the negative. But Gasper did get in one final parting shot when he said, “I wanted to win championships, so I came to UCLA.”

One bonus for Virginia could be the return of star senior midfielder Eric Bird, who’s missed large swaths of the last month with a balky groin muscle. That opened the floor for Pablo Aguilar, who stepped up with an enormous semifinal and provided the assist to Darius Madison’s game-winning goal in a 1-0 victory over UMBC. Bird returned nominally with 10 minutes in that match, but he could play much more in the final. Which could dramatically tilt the game’s tenor given Bird’ playmaking ability.

“Everything feels pretty good right now, but I’m not entirely sure since I haven’t gotten a lot of game minutes,” Bird said. “In the 10 minutes that I was out there last night it felt good. My muscle isn’t giving me any trouble. I feel like the final is going to be based off pure adrenaline, so that’s what I’m counting on.”

As far as UCLA is concerned, a disappointing third-round exit in last year’s NCAA tournament plunged the program into an offseason of soul-searching. Salcedo took a mixture of key players on a retreat to Palm Desert, California to kick off the offseason and talk expectation.

“The strategic plan we put together was all encompassing, and I think you see a group this year that’s extremely unified, a team that understands what its roles are, a team that has an incredible will to win, a group of guys that absolutely care for each other on and off the field,” Salcedo said. “They’ve been a huge delight to be around every single day, every single week and a lot of it is just the culture within the group.”

All that’s left now is a meeting of two titans of the college game for a one-off game to add another to an already loaded trophy case.

“Now that we’re here and get to participate in the national championship game tomorrow, we are excited about the opportunity, look forward to the game,” Salcedo said. “We’re really excited to play against the University of Virginia. We have great admiration for their soccer program. The six national championships they’ve won, we obviously want to win our fifth tomorrow. We’re really excited to step on the field tomorrow at noon.”