Out with the old and in with the new is the motto of the 2012 season for the Western Athletic Conference (WAC). Hawai’i, Fresno State, and Nevada are gone from last season’s teams.

“When you compare what we lost with what we lost, I think the conference is going to be more competitive,” Utah State head coach Heather Cairns told TopDrawerSoccer.com. “We have to win the games at home.”

Cairns’ group ran through the conference last year, but is excited by the prospect of new opponents to take on this fall.

Denver, expected to challenge Utah State at the top of the conference, is also looking forward to playing against some new teams.

“Everyone is more excited with the new teams on the schedule,” Denver junior forward Kristen Hamilton told TopDrawerSoccer.com. “All in all, it is competition we have to beat.”

In the WAC preseason poll released on Tuesday, Denver was picked as the team to beat by the nine other coaches in the conference.

The Pioneers better seize this chance though, as Cairns pointed out, “this is the first and last time this configuration of programs will be in the WAC.” 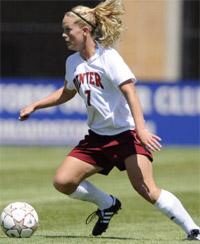 “There is always the goal to win the conference tournament and make the NCAA tournament,” Hamilton said.

Despite the immense amount of goals scored by the Littleton-native over the last two years, her objective remains on helping the team to new heights above anything else.

“It is never thinking just about me,” Hamilton revealed. “I just want to help the team win.”

The biggest challenge for Denver in its quest to conquer the WAC in its first season is playing the conference tournament in Logan. The Aggies are 15-1-3 at home over the last two years.

“The team had the mentality that is has to protect the home turf,” Cairns said. “We have a fantastic fan base with great students.”

Cairns does have some concerns for the upcoming season with “holes to fill” in her starting lineup, but was excited about the return of some players from injury in the fall.

The coach also highlighted senior defender Natalie Norris, who was voted as the WAC Preseason Defensive Player of the Year.

As an independent last year, the Redhawks had a solid year, which included a 2-0 win over Portland(w) in September. Now, Julie Woodward’s group heads to the strange world of conference play.

Fellow coaches in the WAC have expectations for the Redhawks, as they selected her group to finish third about the nine teams. Look for junior defender Monique Escalera to have a standout campaign in her first season in the WAC.

The Spartans struggled in out of conference games last year with a six-game winless streak to start the season. San Jose State did end the year with a few positive results in a row, but there might not be much carryover to 2012.

Jeff Leightman’s squad last nine seniors from last year’s roster and will be relying on a number of new faces to help fill the void. Kelsey Lord is expected to be one of the key cogs for the Spartans.

Lord has scored 21 goals and added 19 assists in her three seasons with San Jose State.

The Vandals were picked to finish fifth in the preseason poll, but there is a big reason to fear any matchup with Idaho: Chelsea Smalls.

The talented striker has 31 goals and 12 assists in her three seasons in Moscow. She has been tabbed as a First-Team All-WAC selection in all three seasons. This year, she was voted as the WAC Preseason Offensive Player of the Year.

Kristen Hamilton may disagree with that assessment, but Smalls has been queen of the hill in the conference for a while now.

There are a number of talented international players on the Roadrunners’ roster. Junior defender Anka Grotle highlights the list. Grotle was a two time first-team All-Southland Conference member. The Norwegian has been a consistent presence at defense since joining the program in 2010.

The Texas State Bobcats join the WAC fresh off an NCAA tournament appearance in 2011. The Bobcats were the Southland Conference champions last fall, but the same expectations are not on them in the WAC.

Felicia Leask and Serena Hines are the two names to watch out for WAC defenses. The duo combined for 16 goals and six assists in 2011.

The Aggies of New Mexico State are another program that hangs its hat on home games. The Aggies went 7-1-1 last year in Las Cruces.

With Denver and Utah State visiting this year, the Aggies will really be tested on home soil.

Senior defender Yolanda McMillion led the team in scoring last year with five goals. The Aggies are going to need another player to step up alongside McMillion to stay competitive in the WAC.

The Lady Techsters suffered through a bumpy season in the WAC last year with a 1-6 record.  This year might not be that different though. Louisiana Tech lost seven seniors from last year’s squad and only has two on this year’s team.

This fall could be a learning experience for the young squad, as coach Kevin Sherry sets out to find some consistency among the ranks.