The West Coast Conference continues to be one of the powerhouse conferences for women’s college soccer. This spring offers another chance for the programs to sharpen their tools.

With four teams in the NCAA tournament last year, and a few others knocking on the door, the coaches recognize that this fall could be very competitive at the top of the conference. 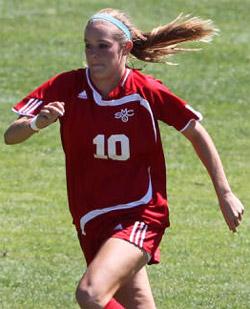 Beyond the usual suspects, Smith also talked about St. Mary's (CA) coach Kai Edwards building a strong program through good recruiting classes and Loyola Marymount's new coaching staff putting that program back into the mix at the top.

For his own squad, Santa Clara returns the two leading scorers from last season, Sophia Huerta and Julie Johnston. Ironically, both of them started their college careers at center back.

“Sophia played the first seven games for us at center back,” Smith said. “Now, that we are consistently playing her up front and she is training at a high level, it is really going help her going forward.”

The coach echoed his own comments about Johnston, who is now playing an attacking midfield position. Smith said he is leaning on those two to produce, as he has set out a goal to score at least two goals per game in the fall.

“Specific to this year, one of our goals is to score two goals a game,” Smith said. “We only lost two games last year, but we had six ties and that is just too many ties. In all those ties, we either scored zero or one goal. My theory is when you play good teams; you are going to need to score at least two goals.”

The Broncos start their spring slate on Wednesday with a game against local rival California, which is where Smith will get his first true look at the major focus of spring – goalkeeping.

The major question for coach Smith and his staff is how to replace keeper Bianca Henninger, who wore the gloves for the past three seasons. The coach said the competition is wide open for someone to grab the top spot.

“[Spring] is a chance for both goalkeepers to assert themselves,” Smith said. “That competition is wide open again. Those keepers will battle for who will be the starting goalkeeper moving forward.”

Up the coast, Portland started its spring season with a 2-0 win against Washington over the weekend. The Pilots only have 13 players on the roster right now, so it was a chance for coach Garrett Smith to see everyone play significant minutes.

“Freshmen, the ones who joined us in the fall, really just survived the first season,” Smith told TopDrawerSoccer.com. “So in spring, we concentrate on them and getting them up to speed. They are going to be a big piece of our team next year.”

Smith had six seniors on last year’s squad including leading scorer Danielle Foxhoven, but he anticipates that U20 Women’s National Team forward Micaela Capelle and Amanda Frisbie are capable of filling those shoes.

He also chimed in with the other coach Smith of the WCC about the potency of the conference in recent years.

“With the recent addition of BYU, we are definitely strengthening our conference,” Smith said. “I think this was the first year that Santa Clara or Portland wasn’t the champion so you can see it is getting tough from top to bottom.”

For now though, the Pilots coach was just relived that there was a spring season this year.

“With the talk of the NCAA possibly trying to eliminate the spring season, it would be a travesty to the game,” Smith added. “They have already put restrictions on [spring soccer], hopefully they don’t abolish it completely.”

The Pilots are not the only side going through a big rebuilding with the lose of a handful of seniors. The San Diego Toreros also had six on the roster last year including Stephanie Ochs, who led the team with 8 goals and 14 assists. Freshman Mariah Butera is the only player who scored more than 2 goals last season that is back for last season’s co-champions.

Pepperdine also looks to be a force on the national stage with the majority of the team back after only losing two games last season. Lynn Williams and Anisa Guajardo are both back for another year after combining for 15 goals and 12 assists last season.

Jordan Marada, St. Mary’s College, Midfielder, Sophomore - In Jordan Marada’s two seasons with the St. Mary’s Gaels, she has knocked in 16 goals and 17 assists. The prolific midfielder has been voted onto the All WCC first team in both of her seasons in college and already ranks in the top ten in points and goals in Gaels’ career history.

Julie Johnston, Santa Clara, Midfielder, Sophomore - Last month, Johnston starred for the U.S. U20 Women’s National Team at the CONCACAF Championships in Panama. In the fall, Santa Clara fans are hoping she can bring some of that success back to the WCC, as the Broncos look to improve on a third place finish in the conference and first round exit in the NCAA tournament.

Michelle Pao, Pepperdine, Defender/Forward, Sophomore - Pao was an NSCAA All American second team defender last season, as she helped to a 15-2-4 record and an NCAA tournament appearance. The rising junior will be looking to lead the Waves to another WCC championship.