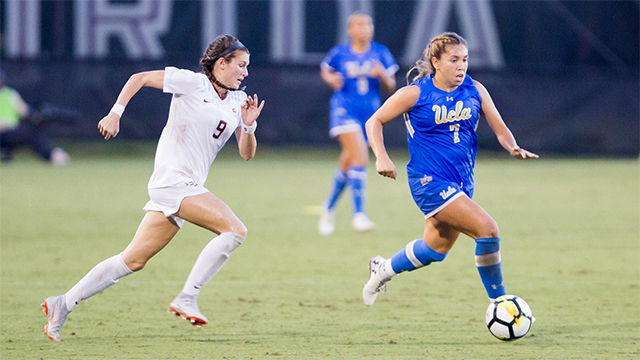 The holiday weekend gets started on Thursday, with two top programs from Florida making the trip to California for some marquee matchups.

Pac-12 sides USC and UCLA all face off against FSU and Florida over the weekend. And the Seminoles-Bruins matchup at the Banc of California Stadium edges the quartet of matchups as must-see (Florida and USC play after the opening match). FSU looked strong last weekend, and Deyna Castellanos started off the season with a goal and assist against TCU. Malia Berkely’s goalazo won the game on Sunday, and her presence at the back will be critical against UCLA’s attack. Ashley Sanchez picked up where she left off with a goal and two assists in UCLA’s first two games, while Mia Fishel has the look of an instant impact freshman.

When you’re retooling an attack that lost one of college soccer’s best players, heading on the road to face a defensively sharp team like Rutgers is a good way to get better. Tennessee had little problem during their opening games, beating Fordham and Mercer last week. A visit to New Jersey provides a step up in competition. MA Vignola’s been the first candidate to pop up and score goals, grabbing one in each of the first two games. For all the talk about Rutgers’ defense, led by goalkeeper Meagan McClelland and defender Chentelle Swaby, Amirah Ali is off to a strong start, with three goals and two assists.

A two-game swing to the East Coast began on Wednesday night, with a 2-1 loss to Wake Forest. Saturday’s game at Duke is not a must-win, but it's a big challenge, depending on how the Blue Devils improve from their opening weekend performance. The quality is there in Ella Stevens and Marykate McGuire in the final third, but there’s a lack of dynamic spark. Goalkeeper Brooke Heinsohn could be busy against a forward group that includes Kelcie Hedge, Kelsey Turnbow and freshman Isabella D'Aquila, who enjoyed a stellar opening weekend.

After a dominating two-game performance at home last week, UVA faces a big step up in competition as West Virginia arrives in Charlottesville. Scoring 13 goals is impressive no matter who you are facing, so it’s going to be interesting how that translates against a strong defensive group like West Virginia. Freshman Diana Ordonez bagged a hat trick in the second game, and has four goals and two assists. Alexa Spaanstra picked up five assists to go with her goal. It could mean a busier night in goal for Rylee Foster, after the Mountaineers were unable to pick up a home win against Stanford last Sunday. Transfer Jessica Lisi’s going to be important as WVU figures out what they are going to look like going forward, and whether or not the Big 12 side can keep pace with a Virginia attack that looks dangerous.

The second of a two-game swing for the Longhorns (they take on Denver Thursday night), it’s a big battle for both teams from an RPI perspective. A win in Boulder would make quite a statement for a Texas team that’s very talented, with Haley Berg, Cyera Hintzen augmented by Canadian national teamers Julia Grosso and Emma Regan. Colorado posted a strong defensive mark in their opening two games, blanking Drake and Boston University. Goalkeeper Jalen Tompkins remains a force between the posts, and she’s one of several seniors looking to make some noise this year in the Pac-12 and beyond.