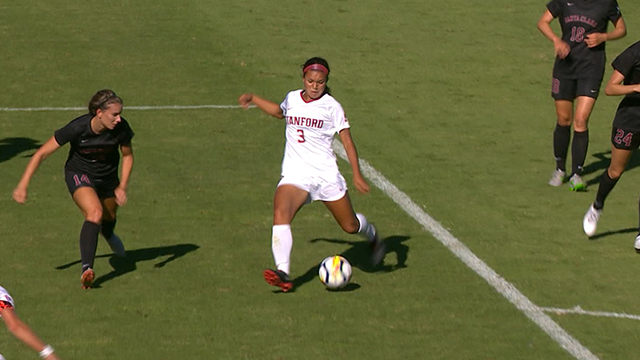 The Big Ten and ACC are two of the conferences heading into league play this weekend. That headlines five of the best games to watch this coming weekend. All kickoff times listed Eastern Standard Time.

While the other powerhouse programs are in action on Thursday night to begin Big Ten play, Friday’s matchup between these two sides carries plenty of intrigue. Part of that’s driven by Iowa, which has won all eight of their games so far, and even a win here would send a statement about Iowa’s intentions. A strong senior group has anchored the Hawkeyes so far, including Devin Burns, Natalie Winters and Hannah Drkulec. Getting off on the right foot in the Big Ten is sure to be a big goal, although the Hoosiers are going to be no pushovers. They’ve won three straight after a 1-3 start under new head coach Erwin Van Bennekom. Freshman Avery Lockwood’s been a bright spot offensively, alongside Chandra Davidson. How the program progresses in league play is going to be fascinating.

One of the marquee matchups of the ACC opening weekend, the Tar Heels are on the road again after their first loss of the season. Part of that boiled down to the absence of Maycee Bell, who missed the Arkansas loss with an injury. If she’s not back, it’s a concern going up against a Louisville side that features the talented Emina Ekic bossing the middle of the park. Of course, nullifying her is going to go a long way in coming up with a win against the Cardinals, but Louisville roll into this one on the back of a 1-0 upset against Vanderbilt.

After an opening-weekend loss to New Mexico, the Red Raiders have spun off six straight wins and head to South Florida looking for a big upset. It’s their final matchup before Big 12 conference play begins, which is shaping up to be a close and exciting race this season. A big step forward junior Kirsten Davis has underlined Texas Tech’s start, as she’s already reached career highs in goals (7) and assists (4). Getting the upset could be as simple as slowing down or trying to stop Evelyne Viens, as the senior forward is as dangerous as ever. Andrea Hauksdottir provides a quality compliment and deadly set piece service, and the American Athletic side are clear favorites at home. However, it should be an entertaining matchup.

The premier matchup for the opening weekend of SEC play features two in-state opponents squaring off in Nashville. Both teams look capable of winning this one, as Vanderbilt started with seven straight wins before getting tripped up last Sunday on the road against Louisville. Forward Haley Hopkins hasn’t skipped a beat as a sophomore, sitting tied for second in the nation with nine goals scored (as of publication). Denying her the ball is going to be an obvious key for Tennessee, which has five wins from their first seven. MA Vignola’s move up front has helped to provide for the loss of Bunny Shaw, while freshmen Sonia Ouchene and Isabella Cook have been crucial. It may be a low-scoring match, but it should be a very good one.

A marquee matchup in Northern California sees two of college soccer’s premier attacking programs line up against one another. The Cardinal have been unstoppable at times in the final third, scoring 27 in seven goals, while Santa Clara chimes in with 21 in eight. Two of the four losses for the Broncos came on a road trip to face two ACC sides, while they managed to vanquish UCLA at home (but lost on the road at California). Finding a way to slow down Catarina Macario is going to be the key to the upset here for Santa Clara, although that’s easier said than done. Freshman Isabella D’Aquila has the second-most goals (8) among freshmen, while Kelsey Turnbow can score goals and create with the best of them. Whether or not the Santa Clara back line can slow down the Cardinal attack enough determines if they can hold serve at home or not.