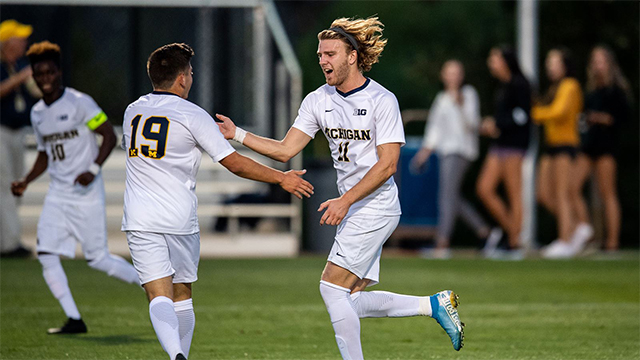 Big Ten, Big East and Pac-12 play begin this weekend in Division I men’s soccer, with entertaining matches around the country.

Below are the top five matches to watch.

The Tar Heels made a winning start to the ACC season, coming from behind on the road to defeat Virginia Tech last Friday. The victory didn’t come without a warning, as UNC conceded first and the Hokies had their chances to build on their lead. Even though they got the goals that time, a 0-0 draw against Davidson back at home wasn’t the result to build upon. They’ll welcome Notre Dame to Chapel Hill, looking to lock down an Irish squad that went on the road and drew 1-1 against Indiana on Tuesday night. It’s hard to see this one evolving into a high-scoring affair, as Notre Dame likes to dig in and defend while trying to counter-punch going forward. Set pieces will be critical an could make up the difference.

Two teams looking to give Georgetown a run for their money in the Big East begin their conference schedule in the Big Apple. Xavier drew and lost to Kentucky and Memphis last week, although in the latter game, lost Felix Boe Tangen to a serious head injury. Samson Sergi’s provided the goal-scoring presence through the first five games, scoring five in all of those matches. The Red Storm haven’t been pushed too far by their schedule, although their 1-0 win in overtime at NC State is an impressive line on the resume. Defensive has been the team’s strength, with four shutouts in their six games. Brandon Knapp’s provided a finishing touch in and around the penalty area, while sophomore defender Matt Chandler and his 6-foot-6 presence in the starting lineup is a welcome addition. The Red Storm are clear favorites, but

In 2018, Cal capped off a disappointing season by holding on to a 1-0 victory against their Bay Area brethren. The Cardinal have obviously far eclipsed what the Golden Bears have mustered from a results perspective, but this Friday’s matchup kicks off Pac-12 play and offers them a chance to show that the gap is closing. Despite losing 1-0 to Denver on Sunday, Cal continued to show positive signs, even when they lost. A missed penalty in the second half proved costly as they outshot the Pioneers 20-7. Even a close game here would do wonders for the program’s early confidence, as freshman Arman Samimi looks lethal. Whether they’ll have enough to best a season Stanford side that includes Tanner Beason and Derek Waldeck.

Just how real the Rutgers turnaround is will get a new chapter this weekend, as the Big Ten slate begins. With five wins from their first six, it’s been an ideal start for new head coach Jim McElderrey. A big part of the success has been the ability of freshmen such as Jackson Temple, Jorgen Wisth Lie and Randy Arronis all carving out significant playing time. Heading on the road to face the Wolverines is a real significant test for the rebuilding process. Any positive result will need to come from slowing down Nebojsa Popovic, who has four goals and three assists in six games. The defense is anchored by Jackson Ragen, Marc Ybarra and Abdou Samake, who have played every minute of all six games so far. Michigan has the players to compete for a Big Ten title, so they’ll be eager to get off to a winning start.

Just five games into the season, and the Bruins have already exceeded expectations in some regards. A big part of that’s been the play of Milan Iloski, who is currently tied atop the goal-scoring charts nationally with seven. The Pac-12 stretch is going to paint the entire picture, obviously, and determine whether or not UCLA can play deep into 2019. A trip up to the Pacific Northwest is going to be a massive test, against a Huskies side that has big aspirations of their own. MLS Academy products Dylan Teves (Seattle) and Blake Bodily (Portland) are two keys to their attack, while freshmen Christian Soto and Imanol Rosales are off to strong starts. The team is difficult to break down defensively, making Iloski potentially the decisive figure here.