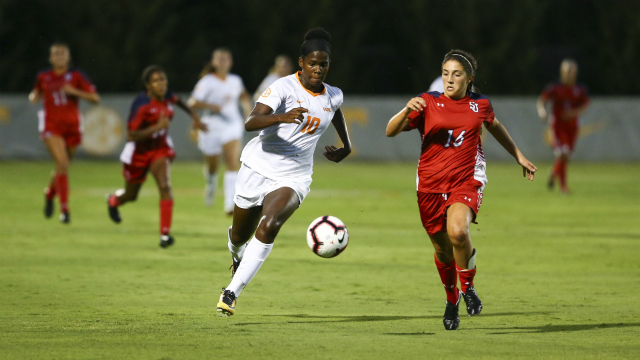 For the teams tussling at the top of the Big 12, every game at this point in the season counts a bit extra. The Jayhawks hit the road this weekend for stops in Austin and Waco, and if they can come away with four points it would be massive for their tournament chances and potentially the Big 12 race. Three wins from their last four stabilized the season after a bit of a wobble. Grace Hagan’s helped pick up the slack after Katie McClure’s dried up, as Hagan scored two goals in her past two games. On the other side, the Longhorns have hit a bit of a wall after a scorching start, with only a pair of wins in the last five times out. Cyera Hintzen continues to be the linchpin in the attack, buoyed by Katie Glenn, Alexa Adams and Haley Berg.

Sunday serves up several intriguing matchups, and in the ACC, Virginia welcomes the Seminoles to Klockner as both teams look to finish strong on the year. The Cavaliers are a perfect 7-0 so far in Charlottesville ahead of Thursday’s game against Syracuse and should be able to pick up a win in that one. Physical teams have limited the Cavaliers in their two losses, so it will be interesting to see the approach that the Seminoles take. FSU boasts plenty of technical midfielders that can pass their way through UVA’s back line as well, though the lack of a dynamic presence up front could impede their chances of the road win. Virginia’s attack is among the nation’s best after last weekend’s 7-0 victory, and with 12 different players, they can hurt through a variety of avenues, including Megan McCool and Rebecca Jarrett. The visitors bring back Gloriana Villalobos and Gabby Carly from Concacaf qualifying, giving them a boost in depth.

The Big East title race is nearly out of reach for Butler, and depending on Thursday’s results, could nullify the stakes in Sunday’s clash. Georgetown’s chase of an unbeaten season is possibly something to play for at Shaw Field. The Hoyas have been dominant, conceding just one goal in six Big East wins, carrying a 12-game winning streak. They’ve shown depth at the back and up front, as senior forward Caitlin Farrell continues to provide the finishing touch in front of goal. The Bulldogs have been unable to keep up with Georgetown’s relentless pace at the top of the standings but can keep the dim hopes of first place alive with a victory. Paige Monaghan’s played through injury to try and help her team and has been unable to replicate last season’s stellar campaign. She hasn’t notched a point in the last seven games and a return to form in this matchup would go a long way for Butler’s chances.

The Cardinal wraps up its home slate with a Sunday tilt against the Buffaloes, before finishing the season with four straight road games. A perfect season in the Pac-12 is certainly within reach, even if talk of that is slightly premature. Stanford’s had 11 days off after last weekend’s match against Arizona State was postponed due to an unplayable pitch. The team is starting to roll, with Catarina Macario heating up, Jordan DiBiasi scoring goals. Perhaps the best thing is in the last game, three different players scored, illustrating the team’s ability to strike through varying avenues.

Bunny Shaw and the Jamaica women’s national team are heading to the World Cup next summer. And the Tennessee forward should be back and ready to punish some Aggie defenders in a critical SEC matchup (she scored the winner for Tennessee in Thursday's 2-1 overtime win at home). Most of what’s at stake is tournament seeding at this point, with Vanderbilt six points ahead of both teams. Regardless, with Shaw back and ready to score, it vastly increases the Volunteers chances of getting a result. The clash between high-scoring forwards – Texas A&M’s Ally Watt and Shaw – makes this a must-see match.