St. Mary’s surprised a few programs last year with its run of upsets in the NCAA tournament that resulted in an Elite Eight appearance. The Gaels, which were the underdogs in all four of its postseason games, found success with a staunch defense and some veteran leadership.

This fall, head coach Adam Cooper will need to work some magic to duplicate that top eight finish. The Gaels lost six starters from last year’s squad to graduation with the most notable replacement needed at goalkeeper.

The Gaels still figure to be the favorites in the West Coast Conference (WCC) entering the season, but there really is no sure thing in this league. Without a conference tournament, the WCC’s automatic bid comes from the league champion, which means every conference game matters.

Last season came down to the final weekend, this season probably won’t be too different.

Out of conference games against CSU Bakersfield and Creighton in the second weekend of September will test just how well Cooper did in replacing the losses from last season.

Finding someone to step in for goalkeeper Doug Herrick, graduated, will be the most difficult task. There are three goalkeepers currently on the roster - Lucas Champenois (freshman), Jonathan Price (freshman), and Andre Rawls (sophomore) – and none has any NCAA experience.

The Broncos ended last season on a six-game unbeaten run (5-0-1), but it was not enough to overcome the four-game losing streak at the beginning of conference play. Santa Clara was left one point short of the postseason berth that the Gaels scooped up and stole in the final weekend of play.

This fall offers a shot at redemption with leading scorer Erik Hurtado (six goals, seven assists) back for his senior campaign. The speedy winger was solid during the summer playing for Portland Timbers U23 in the USL’s Premier Development League.

Freshmen Max Ornstil (midfielder), Jared Hegardt (defender), and Kendall McIntosh (goalkeeper) all have the quality to contribute immediately for the Broncos. 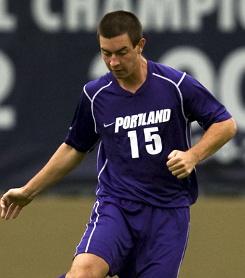 Steven Evans has a WCC Freshman of the Year award and an All-WCC First Team distinction to his credit in his first two seasons with the Pilots. This fall, Evans will be one of the favorites to win the Player of the Year honor in the conference.

The midfielder is as solid and reliable as they come, but also very technical and deadly off set pieces. Evans will be the catalyst of the season for the Pilots, which is a legitimate contender for the WCC league title.

Along with Evans, fans should keep an eye on sophomore defender Derek Boggs who did really well during his freshman campaign.

The Toreros return the 2011 conference player of the year in Dan Delgado, who has been compared to Toronto FC’s Luis Silva. Delgado is the midfield talent that can spark a program into unprecedented results.

The local boy is not the only player worth mentioning on San Diego’s roster. Patrick Wallen, the 2010 WCC Player of the Year, is back for his senior campaign as well. The Swedish striker struggled last year with only three goals in 18 games.

San Diego needs to improve on the road this fall after only going 2-6 in 2011.

The fifth place finish in an eight-team league was not a good look for the LMU Lions in 2011, but it is hard to see much changing this fall.

The Lions are still a strong side and brought in a good recruiting class, but the WCC’s top four looks too difficult to break into this season.

There is a strong possibility though for the Lions to nab a postseason award with Pedro Velazquez looking like one of the early favorites for conference freshman of the year.

Sophomore Miguel Aguilar started off the 2012 preseason just where he left the 2011 season – scoring goals. Aguilar notched the lone goal in San Francisco’s 1-1 draw against Cal Poly last weekend in the preseason opener for both teams.

Goalkeeper Brendan Roslund did not have anything to do against Cal Poly, but still figures to be an important piece for the Dons in 2012. Rosland, the Colorado Rapids Academy product, recorded 101 saves in 2011.

Transfer Liam Kelly is another name to watch for the Bay Area program. Kelly had a successful youth career with Crossfire Premier (Seattle), but did not get much of a shot during his two seasons with Creighton. Perhaps the change of scenery will rejuvenate the once promising prospect’s career.

The Zags return 2011 WCC Freshman of the Year Clark Phillips, who had four goals and three assists in his debut campaign. For the Spokane program to join the competitive fray of the WCC, head coach Einar Thorarinsson needs to find productive pieces to go around him.