Stanford’s shocking defeat headlines the news from last week’s games, but it was not the only story in women’s college soccer during the second weekend of the season.

Over a year in the making

Prior to Sunday, the Stanford Cardinal (2-1-0) last lost a college soccer game in December . . . 2010. It was a 25-game unbeaten run that the West Virginia Mountaineers ended with a 1-0 win thanks to a strike from Frances Silva.

The loss dropped Stanford to #2 in the TopDrawerSoccer.com Tournament 64 National Ranking. 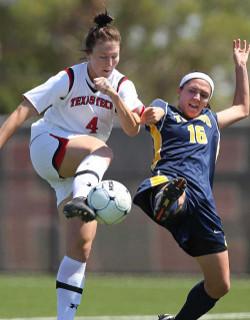 “To me, any streak we have is over at the end of each season,” Stanford head coach Paul Ratcliffe remarked after the game. “This is a new squad and they've got to create their own legacy.”

The coach has preached this message throughout the offseason in the response to any question about Stanford defending the title or continuing last season’s success.

This year’s team has shown characteristics of an unstoppable powerhouse with the 6-1 thrashing of Santa Clara to open the year, and then the 3-2 come-from-behind victory over Penn State on Friday.

But greatness is defined by consistency, and the clunker against West Virginia was far from a defining moment.

The Cardinal only managed one shot on goal over the 90 minutes on Sunday. Seventeen shots taken, but only one forced a save. So at least Ratcliffe has a starting point for where to get this group back on track before Boston College visits on Friday.

Colorado (3-0-1) junior forward Anne Stuller entered the 2012 season with five goals to her name in college soccer. Through the first four games of this season, she has scored SIX goals.

“We knew we were going to score goals this season,” Stuller said after Sunday’s 2-1 win over Wright State. “I have just been fortunate to put in so many goals.”

Stuller, who is originally from Boulder, has scored six of the team’s seven goals this year.

Stuller’s game-winner against Wright State on Sunday was a dandy. The local girl ripped a shot from over 25 yards out into the upper corner of the net leaving the goalie helpless to stop it.

Head coach Danny Sanchez, who is in his first year with the Buffaloes, is staying even-keel about the early season success of Stuller and his squad.

“We know we have some big games coming up,” Sanchez remarked after Sunday’s win.

With Northwestern on the docket for September 2 and a clash against Denver in two weeks, Sanchez’s group will definitely be tested before entering conference play next month.

The Red Raiders let in a goal with 12 minutes left against Idaho in the season opener, but since then the net has been squeaky clean for the last 282 minutes of play for goalkeeper Victoria Esson, who has 11 saves in the four games.

On Sunday, junior forward Jessica Fuston carried the offensive load with three goals in 37 minutes against Montana in a 4-0 whooping. Fuston now has four goals on the season to lead the Red Raiders.

San Diego State (4-0-0) sophomore goalkeeper Rachel Boaz has been just as good with zero goals conceded through the first four games of the season. Boaz has picked up 10 saves to accompany her four-shutout victories. The Aztecs are quickly climbing the national rankings with a spot at #32 this week.

Will history repeat for Idaho State?

This year has started in a similar fashion with wins over North Dakota State (1-3-0), New Mexico State (0-2-0), and Minot State to kick off the season.

With games against Idaho (2-2-0) and Boise State (2-2-0) upcoming, it looks like it could be headed down a parallel path as well.

However, there is one big difference between this year and last. Senior forward Rachel Strawn has put the team on her back to start the year with five goals in three games.

“Strawn stayed here all summer and trained,” Idaho State head coach Allison Gibson said after Saturday’s win over Minot State. “She is getting those opportunities in games and just putting them away. It's exciting. Seeing that hard work pay off is really rewarding for a coach.”

#4 UCLA (3-0-0) made easy work of Fresno State (0-2-1) and Illinois (2-1-1) over the weekend to move into the top five this week. The Bruins, still without their U.S. U20 Women’s National Team stars, have showcased their depth in these non-conference meetings.

#5 Oklahoma State (4-0-0) is unsurprisingly off to a good start in 2012. All-American goalkeeper Adrianna Franch has only let in two goals in four games. The Cowgirls do not play a ranked opponent until #39 Kansas on September 21, so this unbeaten run could last for a while.

Amanda LeCave scored three goals in two games, including two game-winners, and helped move Pepperdine (3-0-0) into the top 25. The Waves, now #22 in the rankings, face #32 San Diego State on Friday in a Southern California clash.

However, the win was not enough to keep the Aggies from sliding down the rankings. Coach G’s side checks in at #8 this week after holding a spot in the top five last week.

There is ample opportunity for the Aggies to rejoin the top five though starting this Friday with a clash against #23 Rutgers (4-0-0).

California dropped to 2-2-0 on the season, and to #17 in the rankings, with losses against #19 Santa Clara (2-1-0) and Missouri (3-0-0). The midweek defeat to the Broncos was a tough pill to swallow. Santa Clara scored on its only shot on goal of the game and held on for the upset victory.

Senior midfielder Haley Krentz had a goal and as assists for the Tigers in the 3-2 road victory over Cal on Sunday. The Tigers’ offense is red-hot to start the season with 10 goals in the first three games.