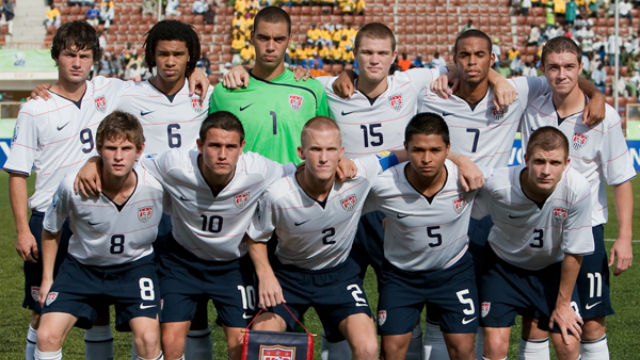 More than five years ago, the U.S. U17 Men’s National Team traveled to Nigeria to compete in the Youth World Cup. Four games later, the team exited in the Round of 16, losing 2-1 to Italy.

With the last crop of the 21-man roster officially finished in the college ranks, it’s an apt time to look back and see what Wilmer Cabrera’s roster put together since the tournament.

Keith Cardona: After two seasons playing for Maryland, Cardona lost his starting job in 2013, then left school, eventually signing a deal with FC Liefering, a team in the Austrian second division, last summer.

Earl Edwards Jr.: Played college soccer at UCLA and is on the invite list for the 2015 MLS combine.

Spencer Richey: A five-year player for Washington, Richey is a late addition to the MLS Combine invite list after helping the Pac-12 program reach prominence over the past few seasons.

Zach Herold: Drafted by Toronto FC in 2010 as a Generation adidas signing, Herold had to retire from soccer after a heart condition was detected in preseason physicals. Listed as a coach for the New York Red Bulls Regional Development Schools.

Perry Kitchen: Arguably the most successful pro player of this crop, Kitchen was the second overall pick in the 2011 MLS SuperDraft after one season at Akron. He’s manned D.C. United’s midfielder for four seasons, making more than 30 appearances and logging more than 11,000 minutes in MLS.

Boyd Okwuonu: Started as a center back for North Carolina over the past four years, including the team’s 2011 national title winning campaign. Spent some time with the U.S. U20 MNT during World Cup qualifying in 2012, and is on the MLS Combine invite list. He’ll need to prove that he can play as a center back at the pro level, as he stands just 5-foot-8.

Tyler Polak: He played two seasons of college soccer in 2010-11 at Creighton before departing early and inking a Generation adidas deal ahead of the 2012 draft. Picked by the Revolution, he made just one appearance before going on loan in 2013 to USL Pro side Rochester Rhinos. Eventually cut loose in 2013, Polak signed with NASL side Minnesota United FC in 2014, making two appearances this season.

Jared Watts: A four year player at Wake Forest who was picked in the 2014 MLS SuperDraft by the Colorado Rapids, the former U17 center back made 17 appearances as a rookie in a decent pro season.

Eriq Zavaleta: Played two seasons in college at Indiana from 2011-12, excelling as a forward for the 2012 NCAA champions. Signed a Generation adidas deal ahead of the 2013 draft, and was picked by the Seattle Sounders. After making five appearances for he Sounders in 2013, was sent to Chivas USA on loan for the 2014 season, where he made 17 appearances in central defense.

Marlon Duran: The Salvadoran-American midfielder spent one season in college soccer playing for Dayton before embarking on a nomadic pro career that began with Aguila in El Salvador. He was last spotted playing for NPSL semi-pro side Dallas City FC in 2014.

Luis Gil: Since joining MLS, Gil has been a solid and steady pro for Real Salt Lake. He’s only logged 6,344 minutes across five seasons, although didn’t appear in a game in 2010.

Carlos Martinez: After wandering through the German second division with FC Energie Cottbus and FC Rot-Weiβ Erfurt from 2011-13, Martinez latched on with USL Pro champions Sacramento Republic, making 14 appearances and playing 587 minutes in 2014.

Will Packwood:  Still on the books at Championship club Birmingham City, where he’s been since 2011, Packwood’s battled some injury issues the past year and a half that has seen him fail to see a lot of playing time in the 2014-15 season. He’ll be age-eligible for the 2016 Olympic campaign should he rebound from his current struggles.

Nick Palodichuk: A promising start to his collegiate career at Duke, where we as All ACC second team as a freshman was derailed by injuries, as his productivity and performances were hampered the last three seasons. His time at Duke at an end, a pro career seems like a long shot at this point.

Alex Shinsky: The TopDrawerSoccer.com No. 1 ranked recruit for the class of 2011, injuries plagued Shinsky for the majority of his collegiate career, as he logged just 2,588 minutes across four seasons, including a little more than 1,000 in 2014. He was selected to the Big Ten All Conference First Team and is a fringe pro prospect for the upcoming draft.

Juan Agudelo: After a promising start to his career in MLS and several caps with the U.S. full team – the only player from the team with multiple appearances for them – Agudelo’s career is in limbo, as he’s been without a club since the start of the summer.

Victor Chavez: The attacker was drafted by the Portland Timbers in January 2014 but failed to make the final roster after four seasons at UCLA.

Andy Craven: A fifth year senior at North Carolina this past fall, Craven began his college career in 2010 with the College of Charleston before a 2012 transfer to Chapel Hill. Scored 15 goals and was named a Finalist for the Hermann Trophy this past season, and was invited to the upcoming MLS combine.

Stefan Jerome: The Florida native’s pro career never materialized after he joined then Miami FC in 2010. He spent time on loan with Sigma Olomouc in the Czech Repbulic and Nykopings BIS in Sweden.

Jack McInerney: Signed a Generation adidas deal with MLS and was drafted seventh overall in 2010 by the Philadelphia Union, McInerney’s carved out a decent MLS career thus far. He’s scored 32 times in 121 appearances for the Union and the Montreal Impact, who he joined earlier this year.

Dominck Sarle: A New York native, Sarle stopped at three schools during a five year NCAA career, playing for St. John’s(m), UC Santa Barbara and most recently Monmouth in 2014. He started every game for the Hawks this past fall, leading the team with six goals and five assists.