Where Geography No Longer Makes Sense North Dakota’s exit furthered the running geography jokes about the conference that now has the majority of the teams in the Eastern Time zone. 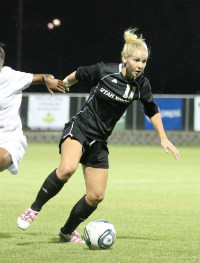 Laughs aside, there are a few story lines from the Great West Conference worth a mention on the national stage, as one program welcomes in a new head coach, another vows to return to the top of the league, and the defending champs set their goals on a bigger prize.

Utah Valley won everything in the Great West Conference in 2011. From the individual accolades to the team’s success, there was a lot for the Wolverines to hang their hats on at the end of the season.

Unfortunately, a berth to the NCAA tournament was not one of them.

In a league without an automatic bid, the Wolverines have shifted their focus slightly for 2012 and now putting the prerogative on non-conference games to help their RPI.

“Our motivation is to beat the schools that will get us noticed,” Regan Benson, the Great West tournament MVP, told TopDrawerSoccer.com. “We hope in the next couple of years that we will be able to make the NCAA tournament.”

For Benson, personally, she put her focus on being a leader in 2012 and helping the team win some of those important non-conference games.

This fall could be a banner year for the Huskies. The squad that finished second in the league and conference tournament to Utah Valley returns every starter.

“It not often you have the entire class back,” Houston Baptist assistant coach Brandon Bonilla told TopDrawerSoccer.com. “We have a chance to do something special in our last year in the conference. We have to continue to develop and work hard. It won’t be easy.”

Houston Baptist is moving to the Southland Conference in 2013, which does have an automatic bid to the NCAA tournament and less severe travel requirements.

Before the move though, the Huskies are planning to make a real push to challenge Utah Valley at the top.

“They are the team to beat,” Bonilla said.  “They are a very good side.”

The coach is confident in his group and the newcomers in making this a season to remember for the Huskies.

“We are hoping the non-conference schedule will set us up for success,” he said. “Time will tell though.”

The biggest question for the Huskies in 2012 will be in the net as four players are competing for the starting position. The coach called it a good problem to have with positive things to say about Patty Walrath, Lara Johnson, Stephanie Castellon, and Shelby Horn.

Last season was an unexpected down year for South Carolina State, but head coach Glad Bugariu is taking a few lessons from the set back.

“We have learned a lot from the previous season,” Buguariu told TopDrawerSoccer.com. “It was a good life lesson. Not making excuses, we have made the necessary changes in our team to compete for the conference title. We are looking to win.”

The coach added that he believes this is a very strong group in 2012 from top to bottom on the roster.

“This year, I think we are the team to beat. Last year, we had expectations on us. We did not handle them very well.”

The Bison finished last season with a good run of form that included three wins in the last four games.

Keeping that streak alive in 2012 could be a real challenge. Howard, yet to announce its incoming class, only had 12 players on its roster last fall.

With less than a month until the first games of the season, there is still a cloud of uncertainty hanging over the Delaware State program. Four-year head coach Nitan Soni was let go in June and replaced by assistant coach Peter Hulem, who is still labeled as the interim head coach.

The expectations are pretty low for Hulem, as the Hornets only won seven games in the last four seasons.

Sophomore striker Lauren Price had a good spring season and could be a key piece in reinvigorating the Hornets under new leadership.

Head coach Sergio Gonzalez’s first year holding the clipboard did not go as planned. With a lengthy losing stretch to start and end the season, the Highlanders suffered through a down season.

Gonzalez has reloaded the roster for 2012 with a number of new faces and could be a team to look out for in the Great West this season.