Who will be the next MLS homegrown signing? More than 70 players have already signed professional contracts via the MLS homegrown rule since 2008, a promising rate when considering how young the Academy system is.

The path to a pro career in the U.S. top flight is still a bumpy and uncertain path, with players in Academy setups still electing to pursue college soccer for at least a couple of years before turning pro – although that’s far from the only route taken.

Plenty of talent remains unsigned, and it won’t be long before more players continue to sign – though not too soon with the season beginning this weekend. Regardless of the timing, here are 12 possible MLS homegrown candidates:

It’s been quite the year for the Red Bulls Academy product. After dominating the Development Academy over two seasons – Allen scored 55 goals from 2010-2012 – he enjoyed a tremendous season for Georgetown, scoring 16 goals, including 10 game winning goals. He parlayed that into a spot on the U20 MNT qualifying roster, making his first appearance in the tournament in the 4-2 win over Canada. 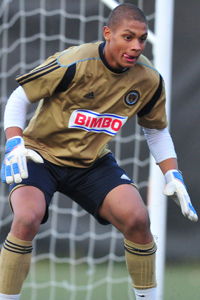 Of course, the next thing Allen has to prove is that his scoring abilities can translate to the pro level, something that the Red Bulls might end up testing him on in the not too distant future. He’ll likely spend at least another year or two in college.

The Whitecaps may already have signed a promising young Canadian striker when they inked youth international Caleb Clarke to a homegrown deal, but that doesn’t mean they shouldn’t consider another. Duke-bound Brody Huitema is another talented youngster who has shown a knack for scoring goals at the Academy level who the ‘Caps could consider.

One of the best freshmen in the nation last season at Wake Forest, Martin is hands down the best Academy prospect D.C. United has in the college ranks at the moment.

Perhaps the biggest question is whether or not he ever decides to sign with his hometown club, having expressed European ambitions in the past. Whatever happens, the attacking midfielder and member of the U20 MNT player pool is a tremendous talent.

Like many of his peers on this list, Allen is bound to start playing collegiate soccer this fall at Virginia, after wrapping up a successful Academy career at Real Salt Lake’s Casa Grande outpost. A tenacious defender who plays as a right back for the U.S. U18s and as a winger for RSL’s Academy, he could be a prime candidate to play a season (or two) of ACC soccer before signing a pro deal.

He may have inked his National Letter of Intent to play this fall at UCLA, but it’s no secret that Arriola wants to test himself on a professional level as soon as possible. Whether it’s with the Galaxy or not remains to be seen, as the club already boasts homegrown strikers Jose Villarreal, Jack McBean and Gyasi Zardes.

However, given his ability to play out wide and up top, don’t be surprised if the Galaxy snatch up the former U.S U17 MNT player at some point too.

It’s not hard to see why Perez stands out on the field, as the attacking midfielder has soft feet, outstanding vision and impressive technical ability. While the Rapids are almost certain to let him play a couple years at Creighton after signing Dillon Serna earlier this offseason, if his development continues at its current pace the Colorado club is certain to ramp up their interest in the promising youngster.

The U.S. youth international is far and away the best goalkeeping prospect in the class of 2013, and barring any unforeseen hiccups, is almost a certain starter for Maryland in the fall. Steffen has all the tools a goalkeeper needs: height, speed, athleticism, reflexes, and is certainly going to get a long look from the Union coaching staff soon enough.

The Dynamo Academy product enters his senior season at Duke after reportedly turning down a homegrown offer from the club this offseason. So if he hasn’t burned a bridge there, look for Houston to try and lock up Ibeagha after the 2013 college season. A beast of a central defender, he would be able to compete for playing time in 2014 in MLS if he doesn’t look elsewhere to begin a pro career.

He may only be 15 years old, and it’s hard to know if the Fire would consider signing him in the near future (Lindley qualifies as a homegrown player after his youth club, Carmel United, entered into a partnership agreement with Chicago in 2011 to become Indiana United Fire), but there’s no questioning the qualities the defensive midfielder possesses.

Calm on the ball, with good passing ability and a good motor, the U.S. U17 MNT player is one of the brightest talents to keep an eye on, providing he can stay healthy. There's a good chance that he heads to Europe at the end of the cycle as well.

The left back and captain of the 2012 Development Academy Champions FC Dallas U18 squad, Ambrose signing a homegrown deal with his hometown club is not a question of if, but when. The Terrapin enjoyed a tremendous freshmen season, and while he looks certain to have at least one more year in College Park, it doesn’t take long to notice that he has “future pro” written all over him.

Another U.S. U17 MNT player, Rubin has a lot of the tools you see in future professionals: consistency, a diligent work ethic, team-first mentality and most importantly impressive attacking talent. He's still young and has a long way to go in terms of his development, but a lot of promising signs are already there.

And if he helps lead the U.S. to the U17 World Cup, after the team heads to the United Arab Emirates, and with a coach who favors young players like Caleb Porter at the helm in Portland, perhaps Rubin makes the jump earlier than expected after the current U17 cycle comes to a close at the end of 2013.

After signing their first homegrown player this offseason, Akron right back DeAndre Yedlin, it’s doubtful that the Sounders lock up another Academy signing this season. Looking down the road, Okoli, a forward who has progressed slowly but surely at Wake Forest, is a player who is sure to be on Seattle’s radar along with Duke product Nick Palodichuk.