It’s a truism that the beginning of the season brings a clean slate for all competitors. While this may always be true for fans with visions of their team lifting a championship trophy, there really is a wide open aspect to this season’s Conference USA men’s soccer race.

In 2011, all nine teams in CUSA were in the top 112 of the RPI, which the conference points out is not true of any other league in the country with at least eight teams competing. The depth and competitiveness of the conference makes for great drama in league title races, but tough sledding for the teams involved.

Following is a brief look at this season’s participants. 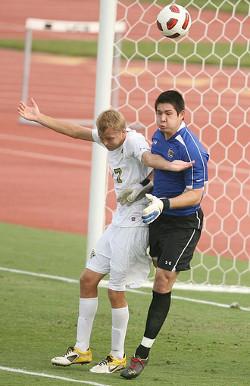 Former UCLA assistant Kenny Arena is the new coach at FIU, and last year’s record would indicate he has some rebuilding to do, but there is some returning talent for the Panthers.

Quentin Albrecht and Colby Burdette bring some punch to the attack. Lucas Di Croce, Chris Lamarre and Ambor Kristinsson return to the midfield and Anthony Hobbs is a preseason all-conference defender.

Richie Grant’s Tigers have some firepower returning up front, with conference player of the year Mark Sherrod back, along with Lewis Ellis.

McKauly Tulloch is back for UCF, and that is a very good thing for coach Bryan Cunningham, who sees a number of lasts. year’s starters depart.

The Jamaican scored 15 goals last year and will be required to shoulder the load early on for the Golden Knights. Andrew Quintana is a key player in the back for UCF.

Tim McClements will be required to replace a lot of departed talent in Dallas this season.

Juan Castillo is a preseason all-conference selection at forward (where Ben Hill also returns); TJ Nelson, Tyler Engel and Damion Rosales return in midfield and Aaron Simmons is a returning defender. Goalkeeper Jaime Ibarra, is also back, but the likes of Zach Barnes, Diogo de Almeida, Robbie Derschang and Arthur Ivo will leave a void with their departures.

Johan Cedergren takes the helm of the Wildcats after leading Dartmouth to five consecutive NCAA Tournament appearances. Dylan Asher will be a key returnee in defense, with Charles Pettys, Tyler Riggs, Jacob Kemper and Cameron Wilder also back.

The Golden Hurricanes will look to rebound from a tough 2011, and midfield playmaker Omar Mata will be vital to their chances of doing so.

Also back from last season is midfielder Tony Rocha, with 11 freshmen coming into the fold for Tom McIntosh’s team.