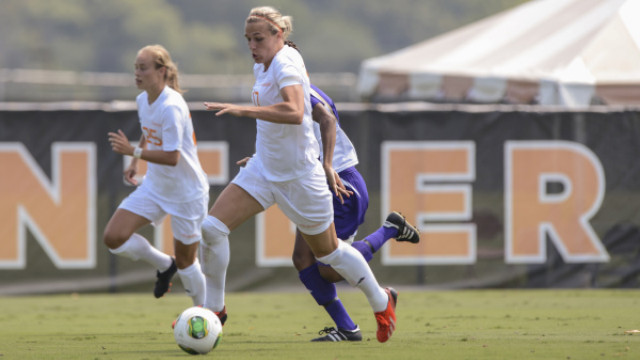 After a hiccup last weekend against Samford, Tennessee had a chance to land a statement non-conference win over UCF. To accomplish that, they needed a big game from the whole team, including New Zealand native Hannah Wilkinson.

The Kiwi did just that with the game winner in a 2-1 win over UCF. After a strong two-goal performance on Sunday, Wilkinson earned Player of the Week honors. 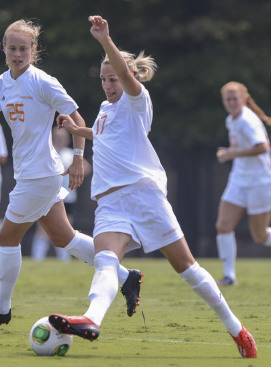 Check out the rest of the TDS Team of the Week:

GK Michelle Kloss, Baylor: Off to its best start in program history with four straight wins, Kloss picked up two more shutouts on Friday and Sunday. After fairly little to do, making one save in a 1-0 win against Washington, Kloss saved a penalty kick in a 2-0 victory over SMU.

D Kirsten Crowley, Florida State: Cowley played every minute of both matches this weekend, wins over intra-state rivals Florida (3-0) and UCF (1-0). Along with being part of a back line that didn’t concede a goal, Crowley bagged the game winner against UCF.

D Natasha Anasi, Duke: The senior center back directed a Duke defense that posted two shutouts over the weekend, 1-0 victories over New Mexico and Kennesaw State respectively. She scored the game-winning goal over Kennesaw State as well.

D Molly Menchel, Virginia: The strong start to the season continued for the Cavaliers. Menchel started and played 90 minutes as they limited the high-powered offense of Penn State to just one goal in a 5-1 win. On Sunday, Menchel bagged a brace in a 3-0 victory against Richmond.

MF Sam Mewis, UCLA: The central midfielder is one of the best players in her position in the country, and she showed it on the road against quality opposition over the weekend. Mewis scored the game winner on Friday in a 2-1 defeat of Marquette. She then helped limited a dangerous Notre Dame side to one shot in 90 minutes in a 1-0 win for the Bruins.

MF Dagny Brynjarsdottir, Florida State: It was a strong performance for the Seminoles in their two games over the weekend, and the Icelandic midfielder scored two goals in two minutes in the 3-0 win over Florida. She also played 87 minutes in an overtime win over UCF.

MF Meghan Toohey, Michigan: The midfielder played an active role in two wins for the Wolverines. On Friday, she scored the game winner in overtime in a 2-1 win against Eastern Michigan, following that up with an assist in a 3-1 victory over San Diego State.

MF Julie Johnston, Santa Clara: Needing their experienced captain to help recover from a rocky start to the season, Johnston led the team’s response, scoring twice in a 4-0 mid-week win against Long Beach State, and notching the game-winning tally versus Fresno State in overtime.

F Hannah Wilkinson, Tennessee: The Volunteers got two big games from the Kiwi on Friday and Sunday Wilkinson helped lead Tennessee to wins over UCF and JMU(w).

F Lynn Williams, Pepperdine: It wasn’t a bad week for the Pepperdine forward. After striking the game winner at home against Wright State, Williams scored twice as the Waves took down the No. 19 Texas A&M on the road by a 3-1 score.

F Hayley Brock, Maryland: In three games since last Monday, Brock scored five goals: a hat trick in a come-from-behind win over Villanova, a goal and an assist in a 3-0 win over George Mason, and an insurance goal in a 2-0 win over Navy on Monday.