Will Akron suffer from 7 departing players? Comments
BALTIMORE, MD – “The reward for good work, is more work, and we have a lot of work cut out for us.”

Those were the words that Akron Men’s Soccer Head Coach Caleb Porter used after seven of his players were selected Thursday in the 2011 Major League Soccer Superdraft. It was a record number for the current NCAA National Champions. Not since 2009 has a school seen so many players being drafted, when Wake Forest had six.

“It’s a dream come true for seven guys and it’s a big reason why I do this. To help these guys reach their potential, to accomplish their goals,” Porter said.  “I am very honored to have worked with these guys and they will do very well at the next level.” 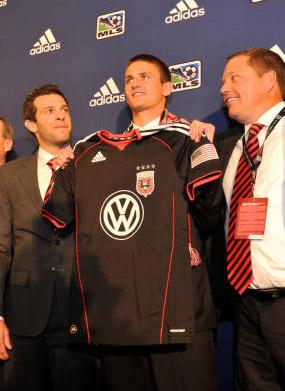 Perry Kitchen after being selected by D.C. United.
Akron furthered cemented itself in draft history when five out of the first eight selections were Zips. Darlington Nagbe, who many had him going as the first-overall draft pick, went instead at number two to the expansion club, Portland Timbers. U20 Men’s National Team player Omar Salgado was the surprise #1 selection by expansion club Vancouver.

Porter is bullish on the prospects of Nagbe, a fast attacking player. (Those of you TopDrawerSoccer.com readers who recall the “vicious red card” video on our site from November, may not realize that Nagbe was the unlucky player on the receiving end of that kick).

“Darlington is the most special guy in college soccer in terms of what he brings, skills, athleticism, game changing, and versatility,” said Porter. “He can play anywhere in the attack. He’s ready and some of the stuff he does is at a whole different level.”

Akron standouts Perry Kitchen and Zarek Valentin were chosen with the third and fourth picks to D.C. United and Chivas USA, respectively.

“He truly is a guy that makes everyone around him better because he wants to win; he doesn’t accept anything less than his best and he expects that out of everybody else as well,” Porter said of Kitchen. “He is a ball winner, tenacious, mentally tough, and good in the air. I think these intangibles are what make him very special. I see him being an eventual captain one day.”

Kofie Sarkodie and Michael Nanchoff were selected with the seventh and eight pick. Sarkodie will be going to the Houston Dynamo while Nanchoff will be playing in Canada for the Vancouver Whitecaps. Chris Korb and Anthony Ampaipitakwong were chosen in the second round by D.C. United and San Jose, respectively.

With so many players lost in one year, the common stigma is that the program will drop with the upcoming college season. On the surface it may look like a rebuilding year for the Zips, however Porter said he is more than prepared to handle this situation. It was a surprise to nobody that Akron would have received a heavy blow in departing players, especially after it won the national championship. 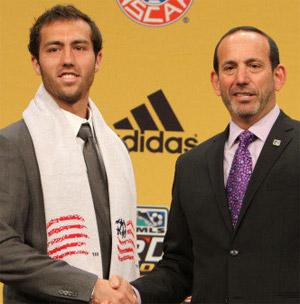 A.J. Soares with MLS Commissioner Don Garber.
“We are prepared to lose and anticipated losing players, so we had already guys committed,” Porter said. “We have some guys right now in the program who didn’t play a whole lot but are very good players, and ready to step in. We probably add two guys and that’s it, we’ll be set. We’ll have a chance to accomplish the same thing as this year, maybe not quite as dominant.

And for those who may think that Porter would become the eighth member of the Akron team to leave to a higher level, he makes it very clear that he is happy where he’s at, having recently signed a 10-year contract extension.

Other programs that had an outstanding day were North Carolina with four players drafted and California with five.

For Cal it was A.J. Soares in the first round, Demtrius Omphroy, Servando Carrasco, and Hector Jimenez in the second round. Finally Davis Paul was drafted in the third round.

The Tar Heels saw defender Jalil Anibaba and Eddie Ababio get picked in the first round and Michael Farfan and Stephen McCarthy in the second round.
Headlines
College Rankings HQ
View all rankings >>