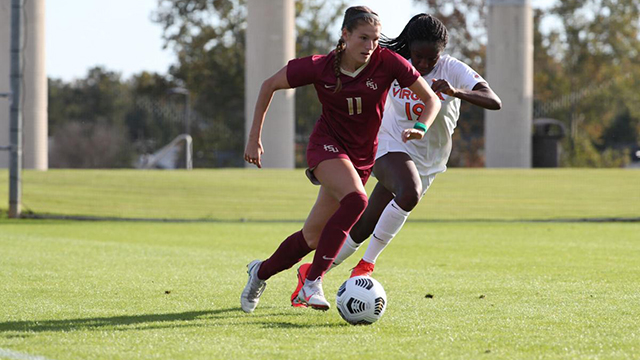 It was nearly an all-ACC affair as the women’s Division I 2020-21 season comes to a close in the coming week.

Preview the College Cup matches below.

The last time these two sides squared off yielded a high-scoring 4-3 matchup that Florida State edged. Both teams look slightly different, but are in good form entering the College Cup. Virginia’s usual possession-oriented tactics have ebbed and flowed slightly; they were willing to sit in and defend against BYU, coming away with a 2-0 win. Florida State has depth and quality, and looks to bring in players like Jenna Nighswonger, Yujie Zhao and Jody Brown in from the bench to play smaller portions of the game. It’s hard to know how each team will approach this, other than it being a much tighter, lowering-scoring matchup than the meeting in fall.

Set pieces are most likely to be where this one is decided, as a big game is needed once again for Virginia shot-stopper Laurel Ivory, should the UVA back line concede chances to the Seminoles. The role of Lia Godfrey will be fascinating, as the freshman has enjoyed a strong season, but making an impact against someone like Jaelin Howell is another proposition. Chances are going to be few and far between for both sides, so if someone like Godfrey, Rebecca Jarrett, Diana Ordonez or Alexa Spaanstra are clutch, the Cavaliers can certainly pull this one off.

From a statistical perspective, Santa Clara represents the best offense that North Carolina faces so far at the tournament, averaging 2.6 goals per game. Julie Doyle, Izzy D’Aquila and Kelsey Turnbow are one of the best attacking trios in the country. Obviously, the caliber of conferences are different, and Virginia sent home the other WCC side earlier in the tournament in the form of BYU. Chance limitation has been a huge part of North Carolina’s run so far, getting goals from set pieces or punishing mistakes while keeping things tight.

There certainly is the quality on the roster for Carolina to adapt and pile on the pressure if they go down a goal, but shutting up shop has led to three wins and three shutouts in the tournament so far. Maycee Bell actually saw her first action in the quarterfinals against Texas A&M, and if she’s back and at full speed, it would certainly help Carolina’s chances of a second straight title game appearance. Regardless, the matchup is a fascinating one between two storied programs.