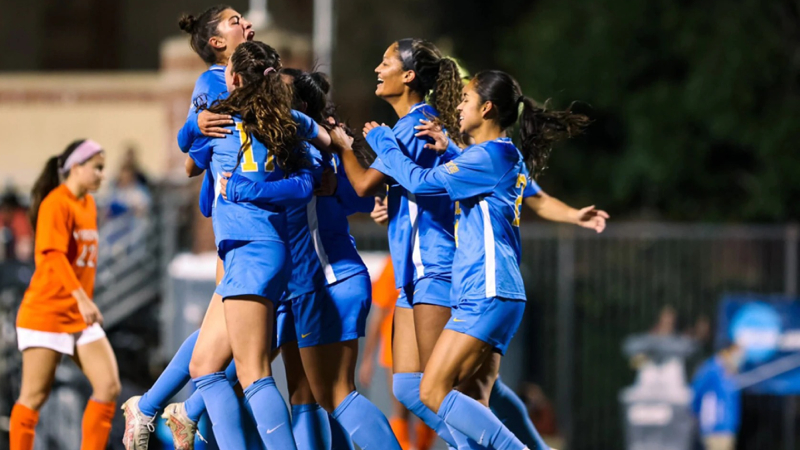 After all of the chaos of the NCAA Tournament, three no. 1 seeds and one no. 2 remain. In other words, the College Cup looks more or less as expected. But that doesn’t mean it lacks excitement. 3 of the four coaches are heading to their first college cups in head coaching roles. Two of them are in their first seasons leading a program. Despite the inevitability of the field, then, there are a lot of new storylines and novel experiences to track here.

And what of the four teams? All of them could quite comfortably win the whole thing. UCLA has been among the favorites since the early goings. Florida State has rounded into form. North Carolina is always a threat. And College Cup debutants Alabama has put together a dream season — and is arguably the most refined squad in the field. Predicting how this all might play out, then, is tricky. So, here’s a look at both matches, with very uneasy guesses as to what might happen.

So, here we are again. These sides have met twice this season, splitting the series at 1-1. The two games were remarkably similar, too, with North Carolina defending deep in a rigid 5-3-2 system, while picking its moments to attack. It worked in the first contest, as North Carolina won 2-1, despite being outshot, 17-12. The return match went the other way, with Florida State making the most of its chances — and showing a little more defensive resilience — to clinch a 2-1 win of its own.

On paper, the Seminoles might be in line for another win here. North Carolina’s star midfielder Samantha Meza is out for the season — making the Tar Heels look significantly weaker in the middle of the park. That could be a big problem against a Florid State side that uses Jenna Nighswonger’s passing range from central positions. Opponents have enjoyed success against Florida State when Nighswonger doesn’t have time to think. Without Meza in the picture, Nighswonger might have the space to dominate. Still, it’s hard to bet against any team coached by Anson Dorrance. The North Carolina boss has championship experience in bunches and a coaching staff that will certainly plan for the intricacies of the Florida State attack. And with forward Ally Sentnor rounding into some goalscoring form, the Tar Heels will certainly have a chance. But Florida State might just have more on the day, and should find themselves playing for a second straight national championship Monday evening.

And what to make of this one? Head coach Wes Hart has led Alabama to a record setting season, and the Tide now find themselves in their first College Cup ever. He’s done so with a well-defined structure that uses a number of offensive weapons. The tide set up in a 4-4-2, with creative wide midfielders and deadly finishes up top. They also have an exciting bench, with substitutes such as the electric Gianna Paul raring to go. There can be no real gripes about Alabam’s path to the final four, either. It had to beat Duke last Friday, and rolled its way through a historically strong SEC slate.

But Alabama hasn’t faced a team of UCLA’s quality yet. The Bruins aren’t as dominant as they were in the early goings of the season but have wins over Duke, UNC and Virginia to their name. First year head coach Marg Aozasa has pieced together a balanced lineup, anchored by USYNT star Lily Reale and bolstered by the goalscoring prowess of Reilyn Turner and Sunshine Fontes. UCLA is versatile, too, capable of holding onto the ball, but also deadly on the break. It showed as such against Virginia, dominating proceedings for the first hour before knicking a winner thanks to a classy counter attack in extra time. Alabama has been a level above for most of this year, but UCLA’s versatility might be too much.