But in the women’s college soccer arena, this is truly the calm before the storm. Within a few weeks, the on-campus efforts to build the best team in the nation will begin in earnest.  While championships are what teams are supposed to play for, the beginning of this new season will bring a sense of greater hope for many programs that they can reach the top of the proverbial mountain. 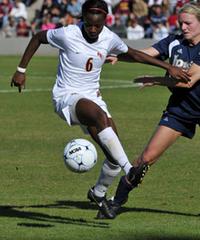 Florida State is always a threat.

All of that is changing. In the past two seasons we’ve seen the likes of Duke, Wake Forest, Boston College and Ohio State reach the final four. While Stanford has been the dominant team of the past few seasons and won its first national title last December in Kennesaw, Georgia, there is a growing number of teams who can legitimately set their sights on a championship run this year.The exclusivity of teams reaching women’s college soccer excellence has been somewhat pronounced over the years. Epitomized by the 21 national championships of North Carolina and punctuated more recently by the repeated title contender and College Cup qualifier status of programs like Stanford, Notre Dame, Portland, Florida State and UCLA, the women’s soccer championship race was one of the toughest tickets around, not for fans but for the actual teams.

With more good players being produced at the club level, and more coaches coming into the system with both the ambition to win and the quality to operate top-level programs at all levels, there are avenues to the top that apparently just didn’t exist before. But they do now.

At TopDrawerSoccer.com we are preparing preview articles on every DI conference, touching every program in each one. Our coverage this season will include the releases on matches from every program, the highly-popular NSCAA scoreboard, and complete schedules and standings of all the teams and leagues.

Additionally, we’ll be highlighting top performers each week and featuring exclusive articles on coaches, players and teams throughout the season. Our Tournament 64 national ranking will continue as a weekly tracking of which teams will be qualifying for the postseason tournament, and our Players To Watch rankings will highlight the top national and conference players in the country, along with a ranking of the top rookie players nationally as the season progresses.

So can Stanford repeat? Will North Carolina return to the pinnacle? Will one of the perennials be back in the driver’s seat, or we will see one of these hungry, new elites stake their claim to elite status. We are expecting more twists and turns than an adventure thriller this season, and we hope you’ll be joining us for all the action.