After dropping the opening game of the season against Portland, North Carolina has been running rampant against its opposition of late.

With a 4-0 win over Marquette and a 5-0 defeat of San Diego last weekend, the Tar Heels extended its winning streak to five, and hasn’t conceded a goal since that loss to the Pilots.

Freshman forward Summer Green – the TopDrawerSoccer.com Player of the Week – scored four goals in those two games, although she’ll miss the next month of the season while competing with the U.S. U17 WNT in Azerbaijan. However, U20 WNT returnees Kealia Ohai, Crystal Dunn and goalkeeper Bryane Heaberlin will help the team cope with her looming absence. 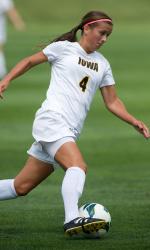 While the Midshipmen dropped its first game of the year at home against Maryland, the team recovered nicely, going 2-0 at the Navy Invitational with wins over Rider and Towson respectively.

"Our attacking has been pretty good and I am proud of our production," head coach Carin Gabarra said in a release. "Going 2-0 over a weekend is always a good thing but I was also proud of our team's reaction to not be happy with the way we played. We still have a little ways to go until we get to where we want to be for Patriot League play."

Fallon Puppolo converted a penalty kick and Caprice Ketly added a second tally in the defeat of Towson, and the seven games won on the trot represent the longest winning streak for the Navy women since 2006.

After winning four straight to open the 2012 season, #13 Louisville lost for the first time all season against in state rivals Kentucky 2-0 on Friday. Natalie Horner and Kelli Hubly scored for the Wildcats.

The Cardinals recovered nicely from the loss, besting Toledo 3-1 on Sunday to get right back on track ahead of the Big East opener this coming Friday. Junior Angelika Uremovich scored a pair of goals in the win as Louisville erased a slow start to the game.

Speaking of strong starts, #11 Virginia Tech maintained its perfect record over the weekend with a 1-0 win against Illinois and a 2-0 win versus Masschusetts(w) at the Wake Forest Tournament in North Carolina.

Jazmine Reeves and Ashley Meier both scored in the defeat of UMass, and the current streak of eight wins in a row sets a new program record for the Hokies.

“We played pretty consistent and solid from start to finish,” head coach Chugger Adair said in a release. “I think breaking down UMass was very difficult. They played a defensive style and to get that first goal was important. It took a little bit longer than I would have liked, scoring later in the game, but it was a good goal to open the game up.”

The weekend started easy enough for #18 Rutgers with a 2-0 defeat of Stony Brook.

But a second match of the weekend against Ivy League side Dartmouth turned out to be trickier when the Big Green found the back of the net in the 57th minute.

Filigno, who won a bronze medal with Canada this summer at the London Olympics, grabbed a quick equalizer four minutes later, and then found the back of the net to secure a 2-1 win with just over a minute left in the game. The Canadian national team forward has seven goals in eight games.

Hawkeyes roll on the road

It’s been quite the start to the season for #33 Iowa, and with two more wins over last weekend the team now holds an impressive 8-0-0 record.

Heading on the road for the Black Night Classic, the Hawkeyes impressed by comfortably beating Army 3-1 and defeating LIU Brooklyn(w) 4-0.

"The team that took the field for us played its most consistent match of the season from beginning to end," he said in a release. "I'm real proud of how we got to play everyone on the roster, everyone good great reps and we continued to limit their chances."