It was a weekend full of history in women’s college soccer. The UCLA Bruins continued their dominance and had two players put their names in the all-time record books. The Baylor Bears also celebrated a milestone of their own on Sunday. And the women of the World Cup-winning U.S. U20 Women’s Nation Team returned to college soccer and made an immediate splash.

UCLA (7-0-1) junior Jenna Richmond dished out three assists against #48 Princeton on Friday night in a 7-0 rout for the Bruins. The trio of helpers puts Richmond’s name in the UCLA record books for most assists in a game, as she tied the previous mark held by five different players.

The record tying night was a bit of an aberration for Richmond this season. The midfielder was pointless heading into the weekend.

With Richmond clicking along with Sarah Killion and Sam Mewis back from U20 Women’s National Team duty, the #4 Bruins are definitely going to be tough to beat.

Pepperdine (6-2-0) got a little taste of that dynamic attack on Sunday when they visited Westwood. U.S. U23 WNT forward Zakiya Bywaters scored twice to lead the Bruins to a 4-0 win over the fellow Southern California program.

In the net, sophomore keeper Katelyn Rowland extended her shutout streak to 603 minutes in the victory over #28 Pepperdine. Rowland now holds the UCLA program record for consecutive shutout minutes, which was previously Cici Peterson (540 minutes in 2000).

The members of the U.S U20 WNT returned to collegiate fields this weekend and many of them immediately put their names on the scoresheet.

Stanford (6-1-1) sophomore Chi Ubogagu provided two assists in a 4-0 win over UNC Greensboro on Sunday. The Cardinal forward was also a key piece of the 1-0 victory over #27 San Diego State on Friday.

Santa Clara (4-2-3) junior Julie Johnston had two assists in two games over the weekend in her return to action. The #20 Broncos topped UNC Greensboro 4-2 and drew San Diego State 1-1 as part of the same tournament with Stanford. Mexican youth international Sophia Huerta scored twice against the Spartans in her second game back from the U20 WNT. 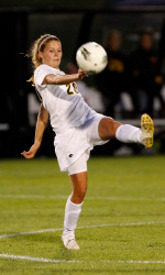 "It's so wonderful to have Julie back and it was the first game we've had Julie and Sofia out there together," Bronco head coach Jerry Smith said after Friday’s game. "They are both such dangerous players. This was just the second time this year we've scored more than one goal so we're very, very pleased with the offense.”

U20 WNT starting midfielder Vanessa DiBernardo scored four minutes into her first game back with #34 Illinois (4-3-1) on Sunday to help the Illini to a 2-1 victory over Iowa. Head coach Janet Rayfield was also making her first appearance of the season after serving as an assistant coach with the youth national team in Japan.

"It was great to get Vanessa back into the mix and with some more training I think we will get in sync even more consistently," Rayfield said after the game.

Minnesota (5-4-0) forward Taylor Uhl provided an assist in the Gophers 2-1 overtime loss to Ohio State in the Big Ten opener for both schools. Uhl moved to 27 points on the season with the helper, but it was not enough for her to keep the top spot in the national standings for points scored.

Iowa (9-1-0) sophomore Cloe Lacasse holds that distinction with 28 points in the first 10 games of the season. Lacasse, a member of the Canada U20 WNT pool, had a goal and two assists against Saint Louis, but was shutout in the Big Ten opener against Illinois.

Lacasse and Uhl are even on total goals with both contributing 11 up to this point in the season.

Texas A&M (8-1-0) goalkeeper Jordan Day, and the rest of her standout defense, turned away seven shots on goal on Sunday on the way to a 4-0 victory over Mississippi (8-1-0) in SEC Western Division Play.

The Aggies have not let in a goal in their last five games, which is a first in program history. Day is well on her way to topping her freshman mark of eight shutouts in the season.

The College Station program was not the only one setting new marks over the weekend.

"We have all worked hard to make this a program everyone can be proud of," Jobson said after the victory. "That work and the heart that everyone has put into this program is why I am so proud to be the head coach at Baylor University."

In Oklahoma, Cowgirls goalkeeper Adrianna Franch has locked up nearly every record in the Oklahoma State program history except saves in a season and career saves. While the former is unlikely, Franch is slowly inching toward the top in the latter.

The star netminder is 37 saves behind second place on the list after making five saves in a 2-0 win over Fresno State (0-6-3) on Sunday.

“(Franch) saved us,” Oklahoma State Colin Carmichael said after the win. “That game could easily have been 2-1, 2-2 and even more of a dogfight towards the end if it wasn’t for three or four big saves. That’s why she’s there. She has some games where she doesn’t have to do too much and gets a lot of credit and some games where she earns her keep, and she certainly did that today.”

Washington State (6-1-0) still has one more non-conference game on the schedule this season; but for all intents and purposes, this is now when all attention turns to the Pac-12 games.

The Cougars have started the season well with 18 points from seven games, but face a big challenge on Thursday with a road trip to UCLA. In the final game before the trip to Los Angeles, Washington State topped neighbor’s Idaho (2-8-0) 5-1 on Sunday behind two goals from sophomore Jocelyn Jeffers.

The quiet whistle of the referee during the affair had head coach Keidane McAlpine thinking the rough and tough style would have the Cougars ready for conference play.

“It was a bit physical but probably really good for us going into conference play,” McAlpine, who is in his first season on the job, said after the game. “We had to get stuck in.”