With a variety of international call-ups ravaging the Tar Heel roster over the first few weeks of the season, the return of U.S. U17 WNT standout Summer Green powered No. 12 North Carolina to a pair of big wins at the Notre Dame Invitational.

The Tar Heels won the Labor Day weekend competition with a 2-0 defeat of No. 27 Connecticut and a 1-0 win against No. 14 Notre Dame on Sunday.

“We’re ecstatic to come in against a very competitive field and sweep the competition,” UNC head coach Anson Dorrance told reporters after the Notre Dame game. “They were two very fine teams and I think this made us better.” 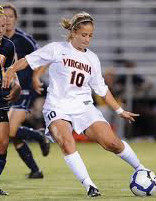 Green was extremely influential throughout the weekend, scoring and assisting on both goals in the 2-0 win against Connecticut and setting up Maria Lubrano’s game winning goal in the win over the Irish.

A pair of Ivy League programs visited North Kehoe Field over the holiday weekend and were handily defeated by the 6-0-0 Georgetown Hoyas.

After seeing off Cornell 6-1 on Saturday, the Hoyas followed that up with a 3-0 defeat of Columbia on Sunday. In all, a good weekend for the undefeated Big East side.

"We've got two very good center-backs and a good goalkeeper and I always feel when the team stays organized and when we have people always making sure people are in the right place, we're difficult to break down," Hoyas head coach Dave Nolan said in a press release. "That's what we're going to need. Columbia asked a lot of questions of us because they moved the ball well, but we never gave them that final opportunity and we're going to need that next week."

Daphne Corboz scored two in the win against Cornell, while forward Kaitlin Brenn scored a goal in each game.

No. 1 Seminoles win battle of Florida

Sophomore Kristin Grubka scored the game’s only goal as the top-ranked Florida State(m) defeated in state counterparts Florida 1-0 over the holiday weekend.

"We created some pretty good chances tonight," FSU head coach Mark Krikorian said after the game. "I thought during the first 25 or 30 minutes we had some chances to score a second or third goal. But the Florida group defended us well, and did quite good on the counter as well.”

Florida State’s success in the early start of the season continued throughout the weekend with a 4-0 defeat of College of Charleston to win its fourth straight game of the season.

The continued absence of Maya Hayes isn’t troubling the Nittany Lions in the least with the way Christine Nairn has started the season.

The attacking midfielder took her early season goal tally to seven on the year so far, scoring two more goals as No. 10 Penn State won two games at the WVU 90 Minute Classic over the weekend.

After scoring the game-winning goal in a 2-1 overtime win against No. 19 West Virginia, Nairn was one of three goal scorers in a 3-0 win over Pittsburgh.

Since an opening season loss against a very tough Penn State team, No. 11 Virginia has got its groove back.

Two wins on a weekend road trip to Texas – a 3-0 win against Texas and a 2-1 defeat of SMU – extended the team’s winning streak to five straight as the team continues to progress without its head coach.

"It is huge to come on the road against two quality opponents in these conditions, with the heat and the wind, and come away with two wins," assistant coach Ron Raab said in a press release. "It is a credit to the team to be able to adapt to those circumstances and play well enough to get two wins.”

Senior Caroline Miller scored goals in both games as Virginia kept on rolling.

Only when the ACC schedule comes will Virginia Tech know just how good it is.

But for now, the team has started in impressive fashion, and took its record to 6-0-0 with a pair of wins against Mount St. Mary’s(w) (4-0) and American (3-0). With the two results, the Hokies have now outscored opponents 14-2 in those six games.

Freshman Ashley Meier scored her first two goals of the season in the two wins, getting a goal in each game.