The dust has finally cleared from the first week of action in women’s college soccer. There was some minor movement in our Top 64 ranking, but the top dog kept its spot.

Stanford junior forward Natalie Griffen started the season with a bang, scoring two goals in her first collegiate start. The Nittany Lions will need to slow Griffen and the high-flying Cardinal attack down. 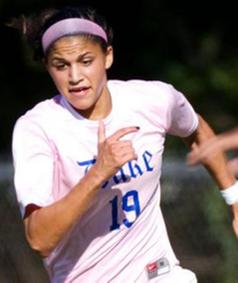 Penn State is off to a hot start of its own with eight goals in the first two games. Senior midfielder Christine Nairn leads the way with two goals and an assist to start the season.

Duke junior Kim DeCesare is one to watch after scoring three goals and dishing out two assists to start the season.

The Gators are looking to rebound after getting trounced by Miami(w) 4-1 in their season opener. The Hurricanes (1-1-0) scored three times in the first half, and Florida never recovered from the offensive onslaught. The Gators defense will need to be much sharper if they stand a chance against #12 North Carolina (0-1-0) on Friday or #2 Duke on Sunday.

The #3 Florida State Seminoles (1-0-0) face the last road game of a three-game swing to start the season (one game was cancelled due to weather) on Friday against in-state rival #28 UCF (2-0-0).

UCF is off to a fast start with wins over South Florida and Florida Gulf Coast. Sophomore forward Jennifer Martin has two goals to start the year.

In the Lone Star State, #4 Texas A&M (1-0-0) finally returns home after a swing through California. The Aggies topped UC Irvine 2-1 to start the season thanks to a late goal from Kelley Monogue.

On Sunday, Monogue and co. take on UT San Antonio (0-2-0). The Roadrunners have struggled out of the gate and will be the underdog against the top team in the state.

After starting the season with impressive wins over Arizona State and San Diego,  Cal State Northridge(w) (2-0-0) will be fairly confident heading into Friday’s home showdown against #32 Baylor (2-0-0).

The Matadors will be counting on senior forward Stephanie Galarze to keep her hot streak alive with two goals in the first two games. Baylor won’t be a push over though. Watch out for junior Alex Klein who has led the offense to start the year.

Kristen Mewis and McKenzie Meehan showed in the opening weekend just how dangerous that combination up top can be for Boston College. Mewis, who spent time training with the full women’s national team this summer, scored the opener and then set up Meehan, the freshman, for her first career tally.

The Huskies defense will be in for a big challenge.