With the start of play in the Atlantic Coast Conference this weekend, there are a number of fixtures that include two teams in the top 20 TopDrawerSoccer.com’s Tournament 64.

The #1 Seminoles (6-0-0) host the #2 Blue Devils (6-1-0) on Thursday in a nationally broadcast fixture on ESPN3. Florida State enters the game with only one goal conceded in its last five games. Goalkeeper Kelsey Wys has been the stalwart between the sticks, but she has been hardly tested with only 18 saves to make in those six games. That will change on Thursday.

Duke is the top team in the nation in scoring offense with 29 goals in seven games. The Blue Devils have a balanced attack with Laura Weinberg, Kim DeCesare, Gilda Doria, and Cassie Pecht all breaking into double digits in points this season.

It only gets better for Duke too with U.S. U20 Women’s National Teamers Kelly Cobb and Mollie Pathman set to rejoin the squad this weekend after winning the World Cup in Japan last week. 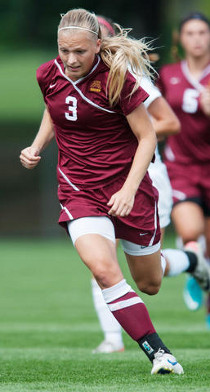 Florida State will have their hands full with Duke, and it does not get much easier with a game against #6 Wake Forest (6-1-1) on Sunday. The Demon Deacons also enjoy the return of one of their stars from the U20 WNT in Katie Stengel.

The Blue Devils wrap up their swing through the Sunshine State with a game against #28 Miami (4-2-1) on Sunday.

Out west, #3 Stanford (4-1-1) takes on the #23 San Diego State (7-0-0) on Friday at a neutral venue. The undefeated Aztecs have enjoyed a dream start to the season, but face a very difficult test with the Cardinal.

The defending Pac 12 champions bring Chi Ubogagu, U20 WNT forward, back into the lineup this week, which adds another weapon to already loaded roster. Paul Ratcliffe’s side closes out the weekend with a game against UNC Greensboro (3-3-3).

The #4 Aggies of Texas A&M kick off their first season in the SEC with a pair of games against ranked opponents. First up is #21 LSU (4-1-2) on Friday.

Both teams possess unforgiving defenses with LSU only letting in two goals in its last four games. The Aggies bring in a 270-minute shut out streak to the contest.

Highlight the Florida State-Duke clash again seemed redundant, so instead the attention is on another ACC fixture. The Tar Heels of North Carolina travel hit the road this weekend for games against Maryland and Virginia.

While both games should be entertaining, it is the Sunday showdown that deserves the spotlight. North Carolina has started finding their form lately after struggling to find the back of the net in the first few games. The Tar Heels have 12 goals in their last four games. They will also enjoy the return of Crystal Dunn, Kealia Ohai, and Bryane Heaberlin to the roster after their success with the U20 WNT.

The Cavaliers are no pushovers though. Head coach Steve Swanson is back in Charlottesville after leading the U.S. U20 WNT to the World Cup title last week. He also brings midfielder Morgan Brian back to campus with him.

The two star-studded rosters should provide some quality entertainment as both squads blend in the returning faces to this year’s roster.

Air Force (4-1-2) defense is tough to beat. The Falcons have not let in a goal in the last 400 minutes of play, a streak that stretches back to August 27, which feels like a year ago. This weekend, the top defense in the nation, statistically hosts Colgate on Friday before heading for an in-state rivalry game against Colorado on Sunday.

Minnesota sophomore Taylor Uhl is top of the nation in scoring with 11 goals and four assists in eight games. Can she keep up the scoring against Ohio State on Sunday?

The U.S. U17 Women’s National Team left for Europe for World Cup preparations on Wednesday. It was not a big deal in the college sphere because only one player from that team has already started her collegiate career. UNC freshman forward Summer Green is the only one who will be absent and she will be missed. Green was top of the team in scoring through the first six games.

Can anyone score on Katelyn Rowland? The UCLA goalkeeper is the last netminder in the nation yet to give up a goal while playing over 50% of the minutes for her team. Rowland has gone 360 minutes without letting one past her for the Bruins.