As another Thursday arrives, another frantic slate of weekend women’s college soccer action is set to begin.

The expanded Atlantic Coast Conference heads into conference play this weekend, which creates some of the best matches to watch over the next few days.

A matchup of two teams off to a strong start, South Florida has outscored opponents 14-2 so far (though half of the goals for came against Arkansas-Pine Bluff(w)) and is working towards the start of the new American Athletic Conference season. Goal-scoring has come from several players as well, with Sharla Passariello, Demi Stokes, Olivia Chance and Victoria Abnathy all with at least two goals so far. South Carolina’s strong start has featured a win against Duke, and has conceded just one goal on the season. Goalkeeper Sabrina D'Angelo has been one of the keys to that defensive record, while Danielle Au and Raina Johnson have come up with big goals needed to win games. 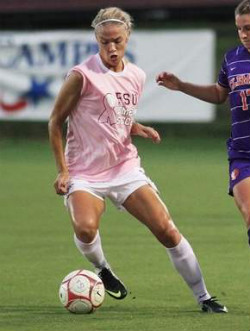 Despite the loss of forward Taylor Uhl, Minnesota has enjoyed a bright start to the season, rattling off six straight wins. A Friday trip to Gainesville represents its biggest test of the year so far. Midfielders Katie Thyken and freshman Josee Stiever have helped lead the way offensively thus far, and will look to continue doing so against a good Gator defense. Florida boasts a number of players who can do damage in the final third, including freshman Savannah Jordan, midfielder Pamela Begic and midfielder Havana Solaun.

Hands down the game of the weekend, as the two prestigious powers square off in Chapel Hill. The Tar Heels have resembled a wrecking ball in the form of a soccer team thus far, as reigning Hermann Trophy winner Crystal Dunn leads the team’s formidable offense. Can the Irish cope with UNC’s depth? Naturally Notre Dame boasts plenty of weapons in all corners of the field. Forward Lauren Bohaboy is in the middle of a fantastic start to the season, freshman midfielder Morgan Andrews is living up to her billing as the nation’s top recruit for the class of 2013, and the center back partnership of Katie Naughton and Sammy Scofield is looking very good. Add Mandy Laddish and Cari Roccaro to the mix and it’s a group capable of slowing down an attack led by Dunn, Kealia Ohai, Alexa Newfield and Summer Green.

Several ACC matchups could wind up on the list for the weekend, but this one is notable because of what each team brings to the table. Once again, Florida State looks to have an impressive defense backstopped by goalkeeper Kelsey Wys, with just two goals conceded this year. Their offensive exploits have had an Icelandic flavor, with Berglind Thorvaldsdottir and Dagny Brynjarsdottir combining for five goals so far. On the other side, Duke’s vaunted offensive talent has yet to fire as advertised, as they’ve yet to score more than one goal in regular season action thus far. The absence of Gilda Doria and Cassie Pecht – who could possibly be out for the season – is a factor in that, which means the likes of Kelly Cobb, Kim DeCesare, Laura Weinberg and Tony Payne need to step up.

This intrastate rivalry is unique since both programs enter the Sunday matchup without a blemish on their records. The Buffalos, lining up in the difficult Pac-12 conference, have been on a torrid start thanks to the scoring exploits of Anne Stuller and Brie Hooks, who have combined for 11 of the team’s 13 goals so far this season. While their schedule so far hasn’t been the most difficult, it did feature a win over Colorado College. Denver also knocked off that program, and is also led by a dynamic scoring duo, with seniors Kristen Hamilton (four goals, four assists) and Nicholette Diglacomo (four goals, one assist) the keys. This has the makings of a high-scoring affair.

Making its first foray into ACC play over the next four days is Notre Dame. Head coach Randy Waldrum has done a fantastic job with the Fighting Irish during his tenure, and he now faces one of his biggest challenges with the conference move. A trip to NC State awaits Thursday, while the real test is going to be the aforementioned visit to Chapel Hill.