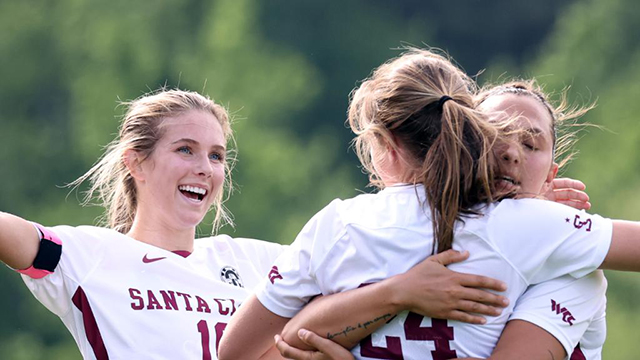 Three of the four College Cup spots were secured at the tournament in North Carolina by ACC programs, as Virginia, North Carolina and Florida State clinched spots.

It was an unsurprisingly tight affair in all four games, as a total of three goals were scored across the entirety of the quarterfinals.

Santa Clara kept it from being an all-ACC affair, edging Clemson by a 1-0 score. Freshman Sally Menti scored the biggest goal of her career to date, as her goal in the 19th minute was enough. Bronco goalkeeper Marlee Nicolos enjoyed a strong day, making six saves to secure Santa Clara’s 11th College Cup appearance in program history, and first since 2004.

HIGHLIGHTS | Sally Menti scored the match-winner and @marleenicolos_1 made key stops in net in today's 1-0 victory over Clemson to punch our ticket to the @NCAASoccer #CollegeCup!#NCAASoccer #StampedeTogether #SCUBroncos pic.twitter.com/UJDE96aXjL

The Broncos line up against North Carolina in the final, as the Tar Heels lockdown defense blanked Texas A&M to secure a 1-0 victory. Rachel Dorwart accounted for the game’s only goal, a 42nd minute strike. Goalkeeper Claudia Dickey made a pair of saves as UNC still haven’t conceded a goal in the tournament.

On the other side of a bracket, Virginia advanced to a first College Cup since 2014, holding on for a 1-0 win against a TCU program enjoying a stellar season. Redshirt senior Elizabeth Sieracki headed home the winning goal in the 60th minute, as the Cavaliers out-shot the Horned Frogs by an 11-5 margin.

In the final quarterfinal matchup of the day, Duke successfully sat in and kept Florida State off the scoreboard over 110 minutes. This despite being out-shot by a 14-2 margin, as Duke goalkeeper Ruthie Jones made eight saves to keep a clean sheet. However, Florida State made all five of their penalty kicks, progressing to an 11th College Cup and eyeing a second national title in three seasons.