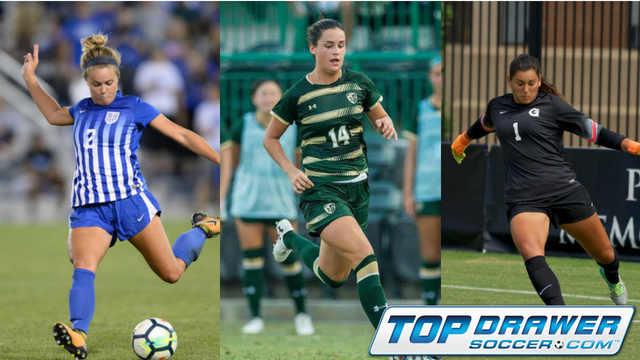 The 2018 Women’s Division I soccer season kicks off in a matter of days.

Ahead of the new season, TDS takes a brief look at what happened in several conferences around the country last year, and what might be in store in 2018.

Below is part one of a three-part look at DI conferences around the nation.

What happened in 2017: Both New Hampshire and Binghamton finished tied atop the regular season standings in the America East last fall, finishing the conference schedule with an identical 5-2-1 record. Neither made it to the NCAA Tournament, however, as Stony Brook and Vermont got hot at the right time of the season to meet in the America East tournament final. The former won, advancing to the tournament for the first time since 2012.

What to expect in 2018: It should be another close race this season, and preseason polling backs that up. New Hampshire nabbed the most first place votes, ahead of Stony Brook, Binghamton and Hartford. If Albany and Vermont can retool quickly and prepare for the conference schedule, they could certainly jump into the mix. A lot of high-level America East talent returns, with 29 players who earned All-Conference or Rookie status last fall return.

What happened in 2017: The two teams from Florida ran away with the conference, as UCF edged South Florida at the top of the summit. Cincinnati, Memphis, Connecticut and SMU rounded out the top six to make the conference tournament. The top sides advanced to the final, where South Florida won on penalty kicks, and both secured spots in the NCAA Tournament. UCF was dealt a cruel blow by the selection committee, getting Washington State and home, losing 1-0 in the first round to the Pac-12 side despite being a No. 2 seed.

What to expect in 2018: While UCF lost some decent attacking pieces in the departure of Morgan Ferrara, Kathellen Sousa and Kayla Adamek, there’s a lot to like in their returning group. Goalkeeper Vera Varis is one of the nation’s best goalkeepers, and German attackers Stefanie Sanders and Dina Orschmann provide a dual-pronged attack. South Florida has as good a chance as any to maintain their high level, as Canadian Evelyne Viens is only a junior. It’s up to the rest of the teams in the conference to close the gap. Memphis has some intriguing pieces back in the mix, and Connecticut is hunting for a return to the summit. One of the top teams last year, Cincinnati lost key defender Vanessa Gilles, a big hole to fill at the back.

What to expect in 2018: New coaches are in place at George Washington, Richmond and Massachusetts. While that may not carry implications at the top of the table, this year’s race looks like it could be wide open. Saint Louis might have the edge, bringing back a talent nucleus that includes Olivia Petit and Alli Klug. La Salle can’t be counted out after an impressive 2017 campaign, while the rest of last year’s contending team will like their chances.

What happened in 2017: Florida Gulf Coast(w) continued its regular-season dominance, earning a share of the regular season crown, sharing it with Lipscomb. In the Atlantic Sun tournament, FCGU edged Lipscomb to secure the NCAA Tournament automatic bid, where it lost 3-0 to South Florida in the first round.

What to expect in 2018: Both Florida Gulf Coast(w) and Lipscomb should lead the race for the regular season title. Liberty is a newcomer to the Atlantic Sun, and perhaps a bit of a wild card. They aren’t the only new program, as North Alabama is also in the fold after moving up from Division II. Programs such as Stetson, North Florida and even Kennesaw State can’t be counted out.

What happened in 2017: Oklahoma State knocked West Virginia off the top of the Big 12, winning the regular season title with an 8-0-1 record. The pair were joined in the NCAA Tournament by TCU, Baylor and Texas. The Bears went the furthest in postseason play, exciting in the quarterfinals against Duke.

What to expect in 2018: A significant amount of talent returns for a number of these sides. Julie James is back to boss the Baylor midfield; the Mountaineers’ spine remains string with Sh’Sh'Nia Gordon up front and Canadians Rylee Foster, Easther Mayi Kith and Bianca St. Georges at the back. If you’re looking for a side to surprise and finish at the top, Texas continued its forward progress, with Cyera Hintzen and Haley Berg leading the attack. Karitas Tomasdottir and Yazmeen Ryan are among the key returnees for TCU.

What happened in 2017: It was another impressive campaign from Georgetown, which won both the Big East regular season and conference titles. Both the Hoyas and second-place finishers Butler posted impressive defensive marks, and the latter made the NCAA Tournament. The two sides exited in the first round.

What to expect in 2018: The Hoyas face significant turnover with the graduation of Elizabeth Wenger in central defense and midfield talisman Rachel Corboz. Head coach Dave Nolan has kept Georgetown at the top of the standings during recent seasons, though he’ll have his work cut out for him this season.

What happened in 2017: It was a double for Eastern Washington, which secured the regular season conference title and tournament crown to make it to the NCAA Tournament. It was a pretty comfortable win in regular season play, eclipsing Montana by seven points with Northern Colorado a point behind that.

What to expect in 2018: EWU lost significant talent from last year’s roster, with all-time program great Chloe Williams graduating. Eighteen newcomers joined the roster, though it’s too soon to tell if Montana, Northern Colorado or Portland State can close the gap. Montana looks like the best positioned program to give the Eagles a good battle as the season begins.

What happened in 2017: High Point and Liberty shared the regular season conference title, posting identical records of 7-1-1 in conference play. It was the former that won the conference tournament, however, securing a spot in the NCAA Tournament.

What to expect in 2018: While High Point was the near-consensus preseason favorite, there could be a title race on the cards in the upcoming season. Both Longwood and Campbell feature quality individuals that could put together a run at the right time of the season. It’s worth noting that Liberty is no longer in the Big South, having move to the Atlantic Sun during the offseason. Hampton University is the new program that’s been added to the conference, though they are unlikely to finish anywhere near the top of the standings.