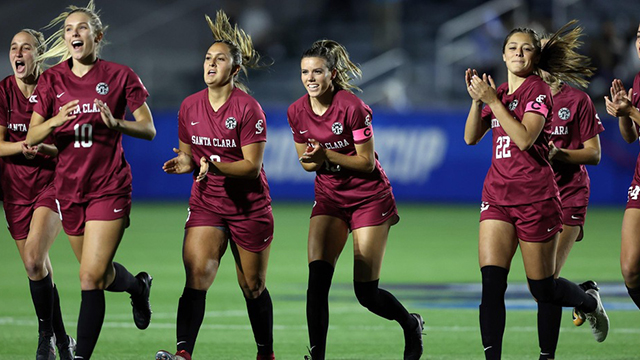 The 2020 National Champion in women’s DI soccer will be decided on Monday, May 17, as Florida State eyes a second title in three seasons. Santa Clara deservedly advanced past North Carolina and seeks a first national title in two decades, capturing the 2001 crown with a 1-0 win over the Tar Heels.

After beating ACC opponents in back-to-back tournament games, seeing off challenges from Clemson and North Carolina, Santa Clara rides high into the title game. The matchup between the attacking firepower offered by the Broncos attacking trio of Izzy D’Aquila, Kelsey Turnbow and Julie Doyle versus Florida State’s ability to limit chances and sit in defensively. Of course, Santa Clara’s coaching staff can look at the tape of FSU’s semifinal against Virginia for ways to exploit, as Rebecca Jarrett and Alexa Spaanstra both found time and space, even if the finish wasn’t there. Outside backs Kirsten Pavlisko and Gabby Carle will both be crucial in tracking the runs of that duo, while freshman Sally Menti and junior Skylar Smith can provide game-changing moments, as Smith’s goal on Thursday night showed. Jaelin Howell’s ability to sit in front of her back line and help the FSU center back’s deal with D’Aquila are going to be crucial.

Going forward, Florida State hasn’t scored a goal since the Third Round matchup against Penn State, where the Seminoles battered the Nittany Lions and outshot them 32-2. Duke sat in and was difficult to break down, while Virginia’s did enough to snuff out dangerous chances. Since scoring a penalty kick against PSU, Florida State is on a goal drought of more than 250 minutes. Malia Berkeley’s absence is notable perhaps more in the team’s build-up play, as her long switches opened up opportunities for wingers. Set pieces could decide this one. Alexis Loera has been stellar, both this season and for nearly her entire career, but the Seminoles will have a decided edge in size. Getting good service from Jenna Nighswonger, or whoever handles corner and free kicks could be decisive. Putting bodies around Marlee Nicolos is something that could cause danger. If that doesn’t work out, Florida State will turn to Jody Brown and Yujie Zhao from the bench if starters like Kristen McFarland, Clara Robbins or Kristina Lynch can’t get an early breakthrough.

-Turnbow is obviously part of Santa Clara’s attacking triumvirate. D’Aquila’s ability to hold the ball up and connect with Turnbow and Doyle on the flanks helps keep the attack tick over. Menti can be one of the creative X-Factors in midfielder, and the time and space she’s able to find against a compact Florida State defense will be critical.

-Defensive excellence and limiting chances are consistent traits of Mark Krikorian teams, and this group is no different – even if Virginia did enjoy flashes of success. The expected center back duo of Emily Madril and Lauren Flynn, along with Cristina Roque, could be called upon to aim to slow down the Santa Clara attack. Or perhaps, if FSU musters a goal, kill the game in front of them and hang on for the win.