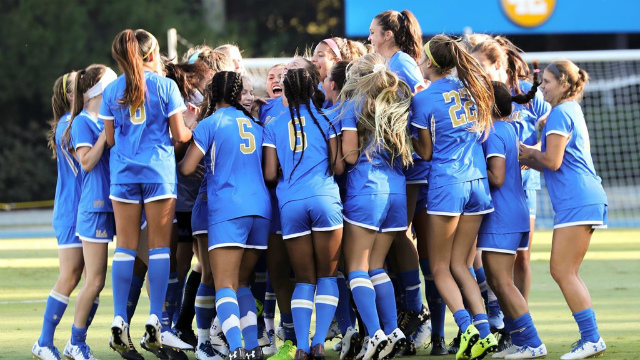 The quick-fire second and third rounds of the women’s Division I NCAA Tournament are on the docket for the coming weekend. The 32-team field is set to be trimmed to eight after two games take place over the next three days, starting on Friday, Nov. 17.

Below is a preview of each regional.

Knocking off the Cardinal is going to be a steep challenge for any team at this stage of the season, and for Auburn, Arizona or Florida State, even more difficult on Stanford’s home turf. Freshman Catarina Macario is easily the top freshman in the country, and her importance within the team’s spine can’t be understated. Midfielder Andi Sullivan and defender Tierna Davidson are, along with Macario, the tip of the iceberg when looking at the team’s talent pool. Auburn’s no slouch themselves, and a huge day from goalkeeper Sarah Le Beau could be the recipe for an upset. Kristen Dodson and Brianne Folds will also need to be decisive and efficient in front of goal.

The other matchup in the second round should provide for entertaining viewing. Arizona’s solid season went under-the-radar in the Pac-12, and they’ll be a tough opponent for an unpredictable Florida State side. International call-ups left their mark on the Seminoles, and they will have a full complement of stars to choose from. The star power of Deyna Castellanos and the caliber of some of the team’s international talent could give them a chance in a third round match against the Cardinal if they can past the Wildcats on Friday.

All four teams enter this weekend with hopes of emerging as a quarterfinal entrant. And all four have a shot, if they find form across the two games. The home side should always be favorite, and West Virginia has been another slightly overlooked team this year after falling in the 2016 national championship. Forward Michaela Abam leads a strong contingent of seniors, and the key in the second round will be finding a way past the strong Rutgers defense and goalkeeper Casey Murphy.

While Penn State is the slight favorite against Wake Forest, the ACC side will fancy its chances. Goal-scoring’s been the issue for the Demon Deacons, however, and a stout Penn State defense can slow down Bayley Feist or Hannah Betfort in front of goal. The Nittany Lions have had similar issues of their own prior to the Big Ten tourney, but Laura Freigang is heating up at the right time of the season to assuage those concerns.

With the highest seed in the regional quadrant losing in the first round, Florida steps up to host this weekend’s round of three games. The first features Washington State, who likely remained in Florida for the entire week in preparation for a second-round match against Tennessee. The availability of Khadija Shaw is one of the keys for this one. If the Volunteer standout is good to go, after exiting last weekend’s game with an injury, that poses a big threat for Ella Dederick in the Cougar goal.

There is plenty standing between Florida and a spot in the Final Four, though with UCF losing last weekend, it opens things up for the Gators. They’ve still got to handle things this weekend, first against a dangerous South Florida side. It’s a clash between Canadian attackers, with sophomore Evelyne Viens continuing her torrid form. On the other side, freshman Deanne Rose has lived up to the hype that accompanies a full international going to college. Gator senior and defensive leader Gabby Seiler is going to do everything she can to help her team win and keep her college career ticking for at least two more games.

Winners of eight straight games heading into Friday night’s contest against Vanderbilt, Santa Clara is another team more than capable of sweeping into the quarterfinals. It’s a tall task, and the cross-country travel certainly favors Vanderbilt to an extent. The Commodores upset No. 4 seed Ohio State in the first round, thanks to a late goal from defender Stephanie Amack. Consistency has been elusive at times for Vandy, though last weekend’s solid result proved that they more than deserve a tournament spot. Freshman Kelsey Turnbow’s excellent campaign for the Broncos, along with fellow first-year standout Julie Doyle, are reasons for the California side to have plenty of optimism.

No. 1 seed for a reason, the Gamecocks have home field advantage amongst the quartet of teams traveling to Colombia. Their formula for success is simple, yet effective, as Savannah McCaskill keeps things ticking over in the final third, while defender Grace Fisk leads a stout back line. Breaking them down is the task ahead for Wisconsin. The Badgers have a big road win under their belts this year after beating Virginia in Charlottesville. Forward Dani Rhodes delivered on that day and throughout the season, and she’s going to need to put in a big day to topple the No. 1 seed.

A fascinating trio of teams descends on Cary, N.C. for UNC’s regional, as the Tar Heels look to hold off challengers from the Pac-12, Ivy League or ACC. The injury bug has reared its head for UNC again, as Jessie Scarpa is now out with a torn ACL, joining Emily Fox on the sidelines. That limits the team’s chances at winning the whole thing, though they are favorites to hold serve at home this weekend. English freshmen Alessia Russo, and a now healthy Lotte Wubben-Moy are big reasons. There’s domestic talent that can make things happen too, from Joanna Boyles, Dorian Bailey and Taylor Otto. While second round opponents Colorado came up short in its previous clashes with high-level Pac-12 opponents, that will leave them well prepared for this massive test. Midfielder Taylor Kornieck and a defense that can be stingy on its day, are reasons that the Buffaloes could pull off the shock upset.

The other matchup in Cary should be one of the best of the round. NC State rolled past Arkansas in its first-round clash, as Tziarra King can’t stop scoring for the Wolfpack. The German influence on the team can’t be understated either, as Ricarda Walkling, Kristina Schuster and Lulu Guttenberger appeared in all 21 games this season. One of those matches was a 2-0 loss against Princeton, offering a rematch of a non-conference game on September 2. Abby Givens and Mimi Asom lead the line, but the Tigers defense conceded just six goals on the season, making them a tough out.

Another intriguing quartet of teams takes the field in Los Angeles, as UCLA rolls out the red carpet for an old foe and a couple of underrated programs seeking upsets. Virginia’s last trip in the NCAA Tournament came in 2014, when the Cavaliers edged the reigning champions to clinch a spot in the College Cup. This year’s team is vastly different. A quality team from a possession and passing perspective, the team lacks the same kind of punch as years past. Freshman Taryn Torres emerged as a bright spot after she slotted in as a starter, while Veronica Latsko has to deliver in order for Virginia to emerge from this trip still alive. Pepperdine, the WCC champions, could even be seen as favorites in this one. A tested team playing in a familiar stadium, the Waves haven’t lost since September 8 against DePaul. Defender Hailey Harbison enjoyed a stellar campaign, while Brianna Visalli’s delivered big goals time and time again.

Standing in the way of UCLA in the second round is a tough defense that could pose problems for the high-powered Bruins. Goalkeeper Lauren Clem gives Northwestern plenty of hope, and if the Wildcats can grab an early goal from a set piece, they would like their chances of an upset. Of course, slowing down a team that boasts Jessie Fleming, Ashley Sanchez and a solid option up top like Hailie Mace, is easier said than done.

Four separate conferences are represented in College Station, and each would want to represent their university but also their respective league well. The Pac-12’s rep, USC, faces a Big 12 foe in the form of Baylor. The overlooked national champs needed two overtimes to beat a plucky Eastern Washington side last weekend. There’s plenty of reason to believe the Women of Troy can pull themselves out of this group, though big weekends are needed from Savannah DeMelo, Alex Anthony and Ally Prisock. The Bears rolls into this one on the back of four straight wins, with three of those coming in the conference tournament. Brazilian senior midfielder Aline De Lima leads the team in goals and assists.

Host side Texas A&M certainly stands out as favorites to advance, but can’t take the second-round matchup against Notre Dame for granted. Natalie Jacobs and Jennifer Westendorf are a fearsome one-two punch offensively. They’ll need to be spot on to stop the Aggies, who have won 14 straight games, with the athletic speedster Ally Watt one of many players that can create trouble in the final third. Home field advantage can’t be overlooked, but this game should be a good one.

The NCAA Tournament has created a Big 12 vs. ACC challenge with the way this second round bracket turned out, with Clemson tussling with Texas and host side Duke facing Oklahoma State. Despite coming up short of a spot in the ACC tournament, Clemson’s resume was enough to get them into the NCAA field. Freshman forward Mariana Speckmaier’s managed to make an impact as a freshman, while upperclassmen like Dani Antieau and Sam Staab are critical figures. Slowing down sophomore Cyera Hintzen is a big part of Clemson’s hope to a victory, while freshman Haley Berg delivered six goals and four assists this year. The Longhorns won their first 11 games of the season against a relatively non-conference slate, and have now gone 3-3-2 in the past eight games.

Duke’s only lost twice this year to one team: North Carolina. With the potential of two home games at Koskinen Stadium, the Blue Devils take on Oklahoma State in the second round. The Cowgirls have the offense to keep up with the ACC side, as Anna Beffer’s setup an impressive 13 goals. Duke’s depth in the final third is hard to keep up with, as Ella Stevens, Taylor Racioppi, Imani Dorsey or Kayla McCoy can find the back of the net. The return of Rebecca Quinn from international duty with Canada is crucial, as she helps keep things ticking over in the midfield.