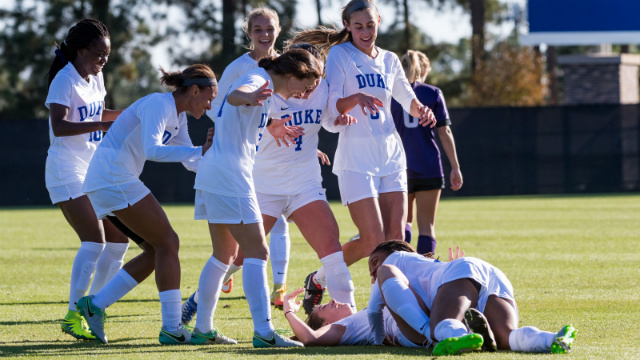 One of two rematches in the quarterfinals, USC traveled to Auburn back in early September for a pair of games coming off two losses in their first three games of the regular season. That proved to be a turning point of sorts, kicking off nine straight wins for USC and laying the foundation for its current success. That meeting back in September matters little at this stage of the season, as USC can see a clear path to the College Cup. The Pac-12 side’s spine will be key once again, with Sammy Jo Prudhomme, Mandy Freeman, Kayla Mills, Morgan Andrews and a slew of forwards capable of locking things down. Goal scoring has dried up somewhat for USC in the tense knockout stages, managing just four goals through the first three tournament games. With Alex Anthony and Leah Pruitt among the options it may not be a concern for long.

Contrastingly, the offensive floodgates have opened for Auburn, scoring 11 times through the first three rounds of the tournament. Midfielder Brooke Ramsier has caught fire of late, scoring five goals and adding six assists in the last seven games. Her twin sister Casie is often thought of as the more reliable goal scorer, while Kristen Dodson recently set a program record for most points in a season (13g, 12a). USC’s impenetrable defense is the critical element to this one, as the Tigers need their offense to continue on a reckless rampage to have a chance of making a trip to San Jose.

The battle of the Carolinas should be a sight to see, as the rampaging SEC side hosts college soccer’s most decorated program. Interestingly enough, the Tar Heels have progressed to this point not because of a star player or two, but rather a measured, collective approach with contributions from everywhere on the field. Whether it’s impact sub Dorian Bailey’s game-winning strike against Clemson, Lindsey Harris’ reliability in goal, Bridgette Andrzejewski’s spark up front or Megan Buckingham’s midfield flair, Carolina can win in many ways. However, it’s been the back line that’s carried them on a nine game unbeaten run, conceding just two goals over that stretch.

MORE: Eight key players for the quarterfinals | Division I Bracket

Just one loss and one tie blot South Carolina’s record through 23 games this season, with the Gamecocks looking imperious at both ends of the field. Savannah McCaskill’s magical season (17g, 11a) keeps her in the running for Player of the Year and the South Carolina offense ticking over. It’s far from a one-woman show, of course, as experienced seniors Chelsean Drennan and Sophie Goff have plenty to add. Defensively, Kaleigh Kurtz leads a back line that’s conceded just nine times, with freshman Mikaela Krzeczowski providing safe hands in goal. Given with what’s at stake, goals are going to be hard to come by in this one.

Of the eight teams left in the tournament, the Broncos are easily the biggest surprise of the bunch. That’s not to say they don’t deserve it, especially after finding a way past Stanford in the second round. Momentum is on their side, winners of seven straight, and a defense rounding into form at the right time. Sophomore defender Gudrun Arnardottir has provided a constant presence at the back for a team that’s conceded just twice during that winning streak, while goalkeeper Melissa Lowder made 20 saves combined in the previous two rounds. Defense will be something that the Broncos will lean on after making the cross country flight, although forward Jordan Jesolva’s shown that she can kick start the offense when given the opportunity.

The Hoyas have the best offense from a statistical perspective fo the teams remaining in the tournament. While a lot of that centers on midfielder Rachel Corboz either scoring or setting things up with a nation-high 16 assists, three other players have at least 10 goals: Grace Damaska, Amanda Carolan and Crystal Thomas. Defensively, the reliable Marina Paul leads the Big East tournament champs, while transfer Arielle Schechtman has been steady and consistent in goal. Home field advantage and the luxury of avoiding travel certainly tilts things in favor of Georgetown.

The most mouth-watering of the quartet of clashes pits two of the best teams in the country against one another. It’s been a tale of two different seasons leading to these sides meeting in Morgantown instead of San Jose. A rematch of an earlier meeting that West Virginia won, Duke’s campaign threatened to veer off the rails after losing Kayla McCoy and Rebecca Quinn to season-ending injuries. Add in the injury woes for Taylor Racioppi, and Robbie Church and his staff have made plenty of adjustments on the fly to get to this point. Seniors Toni Payne and Christina Gibbons have been as excellent as ever, with the latter playing anywhere she’s needed. Freshman Ella Stevens is proving to be every bit as good as advertised, and goalkeeper EJ Proctor flies under the radar but is a quality netminder.

Finding a way to nudge West Virginia off course is going to be tricky. Prior to Sunday’s draw with UCLA (which WVU won on penalty kicks), the Mountaineers had won 14 games in a row, cruising to Big 12 regular season and conference titles. The formula is well known, as Kadeisha Buchanan and Ashley Lawrence form a seemingly impervious barrier in front of the West Virginia goal. The Bruins breached that in the game’s dying minutes, reminding the Mountaineers of their biggest issue at this point: goal scoring. Michaela Abam is a force to reckoned with and must be sharp, while Sh'Nia Gordon can also find a way to create chaos in front of the opposition goal. Anything aside from a low-scoring battle would be a big surprise.