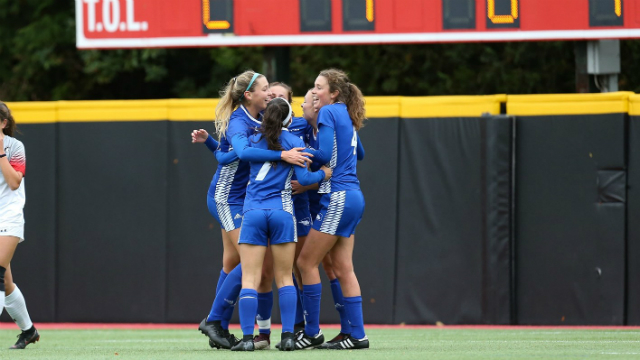 The Women’s Division I tournament kicks off on Friday, November 9.

Sixty-four teams at this point can dream of making a run all the way to Cary, N.C., for the College Cup set to take place in three weeks.

Below is a preview of the first round.

The Volunteers’ reward for putting together a stellar campaign is a matchup against an ACC side. And whatever the motivation (likely travel-related) it serves up what could be a high-scoring affair. Bunny Shaw leads the line for Tennessee, seeking a stellar NCAA tournament run to finish her career. Louisville have the firepower to keep up, however. Whether it’s Brooklynn Rivers, Maisie Whitsett or Emina Ekic, the Cardinals can score goals in bunches. Tennessee is the clear favorite here, though it’s going to be a good match to watch.

Two recent College Cup sides square off in the first round, another quirk of the NCAA tournament committee. The Blue Devils last time they took the field at home, falling 1-0 in the ACC tournament against Florida State. There are pieces there for a deep run for Duke, while they lack the dynamic attacking player, Kayla McCoy, Taylor Racioppi and Ella Stevens can make things happen. Breaking down a resolute Rutgers back line is going to be a tough ask. Freshman Meagan McClelland stepped up in a big way this campaign, securing eight shutouts for the Scarlet Knights. Scoring goals has been the issue from time to time. Rutgers managed three or more goals just three times this season, scoring 28 times in their 19 games. There’s little doubt that a tight, close affair favors the visitors.

One of these two at-large bids sides that were on the bubble heading into Selection Monday will survive to at least the second road. The Wolfpack had a strong RPI, but struggled down the stretch, with just one win in their last five games (against Miami). Tziarra King’s production hasn’t slowed too much to be of concern, though she’ll need to be at her dynamic best against Northwestern’s stout defense. Northwestern doesn’t score a ton of goals – just 21 on the season – though a defense led by Kayla Sharples might lead the Wildcats to sit deep, keep things tight and look to take advantage of counter attacks or set pieces. Regardless, this one sets up as a fascinating clash of styles.

A regular season finale victory against West Virginia likely secured Kansas’ spot in the field, and they were rewarded with a home game against the Atlantic 10 champions. The Billikens must cross Missouri to set up shop at Lawrence, and on paper might look like favorites. They obviously might not play in the same kind caliber of conference as the Big 12, though players like Hannah Friedrich, Maddie Pokorny and Alli Klug give them a formidable spine. Kansas, on the other hand, has just that one win in its last five games, exciting the Big 12 tournament on penalty kicks after drawing 0-0 against Texas. Katie McClure’s clutch goal against the Mountaineers was her first in four games, and a big game from her is needed in this one.

Behold the power of the ACC: not only did the Demon Deacons miss out on the conference tournament, but they get to host a first round game despite finishing with a .500 win-loss mark. The visiting Buckeyes are no pushovers, posting a 1-2 record against ACC opponents this season. Goalkeeper Devon Kerr keeps them in games, which is critical for a team that scored 22 goals in 18 games. Wake Forest blows hot and cold in the final third, getting a huge 1-0 win against Penn State at the start of September that pulled them to this point. A leaky defense against tough ACC opponents is a concern for Wake, as Bayley Feist propels the offense, though it feels like the team is capable of more in the final third.

A Louisville win certainly would go down as an upset, even if the circumstances of the matchup are debatable. Surely a conference tournament winner with a lower RPI would’ve been fairer – like Lipscomb perhaps? As noted above, the Rutgers-Duke matchup could easily see the underdogs find a way to get the job done.

Sifting through the seeded matchups, not a lot jump out. Monmouth has dominated in MAAC play, though it’s hard to imagine them traveling to Klockner and adjusting against Virginia in time to pick up the result.

One of the No. 4 seeds losing seems more plausible; whether that’s Texas falling at the hands of Virginia Tech, Hofstra finding a way to beat Boston College or Long Beach State getting past USC.

F Samantha Feller, Denver – If the Pioneers are to hit the road and come away with the upset win of Pac-12 side Arizona, Feller needs to have a good day. She scored nine times, including four winning goals (one behind Hannah Adler for most on the team) and can help Denver survive their trip to Arizona.

M Brianne Folds, Auburn – One of the top matches of the round not mentioned above sees the Tigers take on Minnesota. Folds cuts a critical figure, especially after her start to the season. She started the season as a house on fire, scoring seven times in the first nine matches of 2018. Since then, Folds has just two goals, both from the penalty spot. With Minnesota bringing firepower in the form of April Bockin, Folds is someone that must step up for her team.

D Sarah Maher, Long Beach State – A well-coached and well-drilled team, living in the shadow of UCLA and USC often sees the Big West side match up against one of those teams when they make the tournament. The two sides met back in mid-September, with USC running away as 3-0 winners. If Maher puts in the performance of a lifetime and can slow down Leah Pruitt, who scored a brace in that matchup, Beach has a fighting chance.

F Clarissa Larisey, Memphis – The sophomore scoring ace bagged four goals in the final four games of the regular season/conference tournament, helping push the Tigers to the AAC crown. A home game against Wisconsin was their reward, and it’s certainly a winnable game if they can get a big performance from Larisey in the attack.

D Madeline Anderson, Hofstra – Back-to-back Defensive Player of the Year in the CAA, Anderson’s play down the final stretch helped the Pride secure the automatic bid in the conference tournament. A first round match against Boston College, a No. 4 seed, is not going to be easy. The ACC side hasn't lost just one game at home all season in 12 games. If Anderson can shut down Sam Coffey and the Eagles, it’s a good sign for the upset.