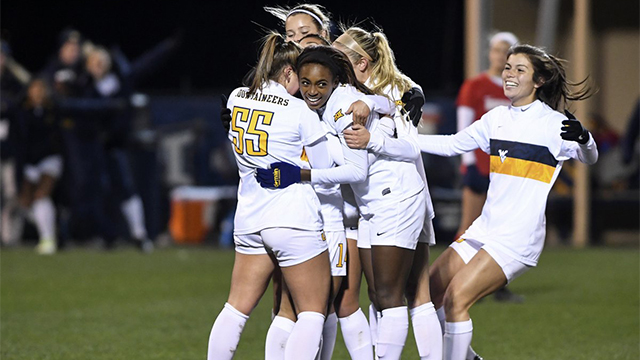 The women’s Division I tournament resumes on Friday and Sunday, with second and third round games set to take the field 32 to eight in the span of three days.

Below is a region-by-region look at what to expect this weekend.

Overview: The top-seeded Hoyas welcome a talented quartet of teams on Friday, as the four sides jostle for position. Both matchups could end up being pretty close, especially Georgetown’s matchup against a Washington State side that’s bounced back from a midseason lull. Duke should have the upper hand against Lipscomb, although the A-Sun champs are going to be bolstered

Overview: Host side UCLA brings the firepower, and the Bruins are on a hunt for a return to the College Cup. Jessie Fleming’s ability to pierce opposing defenses is obviously a big part of that, and Minnesota will have its hands full. Whoever wins the other matchup between Santa Clara and NC State won’t hate its chances of making it to the quarterfinals.

Overview: Two heavyweights descend on the Florida capital when USC makes the trip to tussle with a talented field. LSU is the Pac-12 side’s first obstacle, and the SEC program is sure to have its hands full against a team that won 6-0 to open the weekend. Florida State needs a better performance on Friday and Sunday to keep their season alive. Evelyne Viens, a talent for South Florida, is going to punish any lethargy the hosts might show.

Overview: WakeMed Soccer Park serves as the home for Friday’s and Sunday’s games, as Carolina seeks a return to the quarterfinals of the tournament. First up, Arkansas and Virginia Tech will duke it out in what is sure to be a rough-and-tumble game. Then, the Heels’ stout defense – the ACC tournament final aside – can lock down Kansas and send the Big 12 team home for the holidays. With Alessia Russo sideline, it’ll be interesting to see how UNC copes without their prized attacker.

Overview: Waco is the home of high-scoring freshmen this weekend, as Virginia’s first-year forward Alexa Spaanstra and Rebecca Jarrett seek a two-win swing to Texas. The Red Raiders can provide a substantial obstacle in Friday’s Second Round, led in part by another freshman: Cassandra Hiatt. Baylor-Vanderbilt is one of the matchups of the round, as the Commodores’ tremendous campaign was anchored by Redshirt Freshman Haley Hopkins. Midfielder Julie James can unlock any defense in the country, and if she gets going, the rest of the field should watch out.

Overview: Three teams arrive in Palo Alto looking to slow down the Cardinal, although only two will get a crack at the defending champions. Hofstra produced the result of the first round, beating Boston College by a 4-1 score line on the road. Next up is a Wisconsin side that failed to make it to the final four of the Big Ten tournament, but is a dangerous team when Victoria Pickett gets the ball. CeCe Kizer and Mississippi bring plenty of firepower to Friday’s second round matchup. But whether that’s going to be enough to crack Stanford’s slew of talent is what they must do. The Cardinal have barely missed a beat, running the table despite losing Tierna Davidson and Sophia Smith to serious injuries.

Overview: Another entertaining trio of games are set for Tennessee’s home turf, as the SEC side seeks a spot in the quarterfinals. Both seeded teams face tricky challenges, whether it’s TCU looking to slow down fellow Texas program Texas A&M or underrated Pac-12 side Arizona duking it out with Tennessee. Look for both SEC strikers, Bunny Shaw (Vols) and Ally Watt (A&M) to play significant roles in whichever side secures progress.

Overview: It’s going to be a big battle in Morgantown, with tough, well-coached and disciplined sides making up the field. South Carolina’s reward for a seed is a second-round matchup with Penn State, as former Nittany Lion Grace Fisk leads her side against the Big Ten tournament champions. Emily Ogle’s ability to lock down the field is going to be critical, while Penn State must find its finishing touch against a good team. Hosts West Virginia must deal with Wake Forest, a talented ACC side that’s been inconsistent this season. The Demon Deacons survived a first-round test at home against Ohio State, winning it in overtime.