Through two rounds of the women’s Division I tournament, one thing is clear: the ACC is dominating once again.

All eight ACC teams that qualified for the NCAA field are alive and preparing to play on Sunday – some coming through as favorites, while others have put together a somewhat surprising run.

Here’s a look ahead at third round action, with all times listed as eastern. 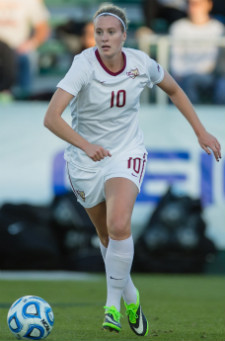 Playing a day earlier to accommodate a possible BYU inclusion, this ACC vs. Pac-12 matchup features a national powerhouse against a bubble team that found a way to the Sweet 16. The Buffaloes have done very well to stay alive after eliminating the Cougars, but they’ll be up against a tough and determined Seminole side in search of a third straight College Cup appearance. Dagny Brynjarsdottir continues to deliver huge goals for Florida State, which is a quality defensive side that lacks a big-time scorer up front. Of course, Brynjarsdottir and her Icelandic teammate Berglind Thorvaldsdottir have both come through at big moments. There might not be a better back five in the country, with the likes of Kristin Grubka, Megan Campbell and Kassey Kallman snuffing out everything in front of sure-handed netminder Kelsey Wys. Forward Anne Stuller has fired Colorado to this point, scoring in the tournament wins against BYU and Denver, and she'll look to do the same against the Seminoles. Midfielder Madison Krauser, Darcy Jerman and Carly Bolyard provide a solid platform for an unseeded side that will aim for the knockout blow in Florida.

A tussle of two teams that many may not have expected to see here, the Eagles and Illini both got past seeded opponents in the second round – BC dashing past bracket hosts Nebraska 4-1, while Illinois produced a rather remarkable come back to beat Portland 4-3. A trio of attackers leads the Eagles in the final third, as McKenzie Meehan, Stephanie McCaffrey and Haley Dowd have combined for 33 of the team’s 41 goals on the season. They’ll look to unseat an Illinois side by replicating Friday’s offensive effort of 33 shots unleashed at the Huskers. For Illinois, forward Janelle Flaws is in the middle of a career year, fresh off a two-goal game against the Pilots and will look to push the Illini one round further. Midfield maestro Vanessa DiBernardo is fit and played 100 minutes on Friday – she’ll need to be on form once again to push Illinois on to the next round.

Both squads eked out one-goal wins on Friday night, setting up a third round matchup that have kickoff temperatures forecasted to be in the high 20s on Sunday. The Hokies have dropped just one game from their last five, and boast a tremendous trio of offensive talent in forwards Jazmine Reeves, Murielle Tiernan and Ashley Meier. That’s without mentioning a tidy defense that will look to keep the Broncos in check in Blacksburg. This meeting is an opportunity for Santa Clara to pick up a marquee win against an ACC program, having lost heavily against both Virginia and North Carolina at the start of the season. Keeping the season alive is obviously the main priority of course, though it's added incentive to try and best an ACC opponent. They’ll turn to their usual cast of contributors in midfielder Julie Johnston, while forwards Morgan Marlborough and Sophia Huerta look to find a way past the Hokie back line.

Yet another tantalizing matchup on paper, the Irish are one of several unseeded sides still alive, more than capable of taking it to their seeded opponents. Michigan is a team that can hurt you a variety of ways offensively, as linchpin forward Nkem Eziruke struck in a 3-0 second round win over Illinois State. The speed of freshman attacker Madisson Lewis provides a different element than Eziruke’s brawn, while experienced veterans like Holly Hein and Shelina Zadorsky know what’s at stake at this stage of the tournament. While Notre Dame has seven losses to its name heading into this one, it’s been a byproduct of the move to the ACC, and there is blue chip talent in Cari Roccaro, Morgan Andrews and Mandy Laddish – to name a few. There’s going to be little separating these teams.

A 31-minute shift off the bench from reigning Hermann Trophy winner Crystal Dunn in Friday’s 4-0 blowout win over Indiana should send warning signs to the rest of the field. Dunn’s leg injury could be what derails the Tar Heels this season, though UNC has shown little signs of finishing with anything but another College Cup appearance. Amber Munerlyn, Kealia Ohai and Paige Nielsen also scored in the second round win, demonstrating that other offensive weapons are at Anson Dorrance’s disposal. Defensively, UNC is extremely solid as well, as Megan Brigman and Hanna Gardner continue to handle dangerous situations even with the pressure on. It’s going to take quite the effort to disrupt the Aggies, which managed to sneak past in state rivals Texas Tech on penalty kicks. There was good news for A&M in that game, as Rachel Lenz returned and played all 110 minutes after missing the previous tournament game with concussion symptoms. A&M does have the weapons to test the Tar Heel back line, as Shea Groom, Annie Kunz, Kelley Monogue and Elizabeth Keester all bring different looks to the table. The question of fatigue could creep in, as the depth of Carolina could make up the difference in this one.

The second of two matches between a pair of unseeded sides, it’s an interesting contrast between a Blue Devil side belatedly meeting expectations and a Razorbacks side entering new territory. Duke held off a talented Florida team that was missing one of its best players in Havana Saloun, while goalkeeper Meghan Thomas made seven saves in picking up the shutout behind Natasha Anasi’s first half goal. Injuries may have ravaged the Blue Devils this season, but a quarterfinal spot is up for grabs, and behind players like Laura Weinberg, Kelly Cobb and Kim DeCesare, within reach. Sunday’s game represents new territory for the Razorbacks, which won their first two NCAA games of all time over the past week. They were able to grind out a win on Friday against St. John's and will look for more of the same formula – tough defense led by Allie Tripp and Hailey Pescatore, and timely scoring from someone like Claire Kelley or Ashleigh Ellenwood.

An all-ACC matchup here ensures that the Elite Eight won’t be comprised entirely of teams from one league. The Cavaliers have righted the ship after their only hiccup of the season in the ACC tournament semifinals, holding a powerful Georgetown offense without a shot on goal in a 1-0 win. Midfielder Morgan Brian supplied the winning tally in that one, and she’ll cut a critical figure once again, looking to slip in leading scorer Makenzy Doniak or a number of other quality weapons. The Demon Deacons edged Penn State in the previous round, and they’ll need to replicate the defensive effort once again. Goalkeeper Aubrey Bledsoe made four saves in the win against the Nittany Lions, and she’ll need to be even better against the best attacking side in the country, and then hope for someone like Sarah Teegarden or Riley Ridgik to supply offensive heroics.

Another year, another UCLA-Stanford meeting in the NCAA tournament. Last season the two sides met in the quarterfinals, with the winner advancing to the College Cup. This time around, it's for a place in the quarterfinals as the Cardinal slipped a bit on the season, though are still formidable foes. The Bruins enter the rivalry match on the heels of a 3-0 win against Kentucky, winners of six in a row and unbeaten in their last 17 games overall. Earlier in the season they needed overtime, but beat Stanford 2-1 away from home. Sunday is a chance to host, and an opportunity to erase demons from past meetings with the Cardinal. They'll need to turn to the usual suspects like Sam Mewis, goalkeeper Katelyn Rowland and center back Abby Dahlkemper to get the job done this around around. For Stanford, while they are definite underdogs, there is a lot of talent on the roster. Senior Courtney Verloo is one of the more experienced players in the final third, and she'll look to get the attack going alongside Taylor Uhl and Chioma Ubogagu. Youth at the back is going to be critical, as freshman Maddie Bauer is likely to start along the back line and first-year goalkeeper Jane Campbell in net. Both are talented and experienced beyond their years of course, and will strive to write a new chapter in this Pac-12 rivalry.