Perhaps the best match of the week took place on Wednesday night, as North Carolina and Florida State battled in a clash of top 5 ranked programs. The Seminoles came out on top of that one, winning it 1-0 thanks to a goal from Jamia Fields.

That doesn’t mean there isn’t a lot at stake or other good matchups to watch over the next few days. ACC play is certainly going to be massive, but other conferences are heating up and preparing for action in the coming days. 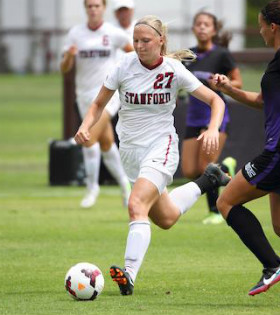 Here’s a look at five matchups to watch over the next few days:

Once the ACC regular season hits, the intriguing matchups rattle off every few days. Most, if not all intra-North Carolina games are good ones, and this one should be. Wake Forest forward Katie Stengel has helped lead the Demon Deacons to an undefeated start to the season, scoring four game-winning goals so far, leading the team in goals scored and assists. While she’s integral, it’s far from a one-woman team, as midfielder Riley Ridgik has been superb in the center of the park, and goalkeeper Aubrey Bledsoe has maintained her high performance level.

Duke is somewhat of a contrast, as it’s offense has sputtered with just nine goals overall in eight games, clearly impacted by Cassie Pecht’s injury. However, there should be plenty of firepower to help the team help things trend upward, with Kim DeCesare, Kelly Cobb and Laura Weinberg offering options up front, along with Toni Payne in the attacking midfield slot. The matchup of Duke center back Natasha Anasi and Stengel could be the make-or-break battle of this game.

Like the SEC, the Big Ten begins play this week, continuing the chance for programs to keep building toward the postseason. This particular matchup features a pair of top-25 caliber teams that have hit bumps in the road early on in the season, only to now have things a bit more under control heading into this meeting. Freshman Nichelle Prince has been as good as advertised for Ohio State, leading the Buckeyes in both goals and assists thus far. Now, it’s about proving it against Big Ten opposition, starting this weekend against a Fighting Illini side that is led by U.S. youth international Vanessa DiBernardo and streaky scorer Janelle Flaws.

The Volunteers aren’t exactly peaking heading into their conference opener against the SEC’s best team, winless in two games over the weekend where they failed to score a goal. That is erased however, as the two sides prepare to duke it out in Knoxville. Tennessee forward Hannah Wilkinson (five goals, three assists) has been as good as advertised so far this season, though she’ll need some help if the Volunteers are to take this one. Defensively, the Aggies look capable of shutting down Wilkinson, with Rachel Lenz and Meghan Streight both very good at the back. The re-emergence of Kelley Monogue gives A&M another offensive weapon to trot out up front, certain to keep UT busy on Friday.

Can either of these SEC programs sustain a hot start? Mississippi got out of the gates strong in similar fashion last year, and a meeting with Arkansas represents opportunity for both to begin the conference slate in positive fashion. Ole Miss bring a strong attack into this one, led by its scoring duo of Rafaelle Souza and Mandy McCalla, who have a combined 14 goals and four assists thus far.

After rattling off seven straight wins, the Razorbacks couldn’t make it a perfect eight from eight, losing on the road at TCU on Sunday. Still, contributions from players like Ashleigh Ellenwood, Rachel Riggs and Evan Palmer keyed the strong start, and they’ll look to keep moving things forward in SEC play.

The women’s college soccer weekend concludes with this west coast battle. After a rough trip to the east coast to start the season, Santa Clara has righted the ship. Midfielder Julie Johnston remains a key cog for the Broncos, and could reassert her stake in the Hermann Trophy race with a big performance against a talented Cardinal side. Transfer Morgan Marlborough looks to have her feet under her, and is fresh off a three-goal performance on Sunday in a win over Iowa State.

Speaking of transfers, Cardinal forward Taylor Uhl has an impressive six goals in her first six games for Stanford, and her scoring ability has been a huge lift given the injuries the team has endured. Forward Chioma Ubogagu has missed time, same with goalkeeper Emily Oliver. Fortunately, the freshmen class has stepped up in a big way. That includes goalkeeper Jane Campbell, who has abled assumed the starting role in goal, and Maddie Bauer, who has impressed in defense.

It’s been a season of ups and downs so far for Robbie Church’s Duke squad. Injuries have been a factor, as the aforementioned knock to Cassie Pecht looks like it’ll keep the playmaker sidelined for the season. The offense, which hasn’t produced at the same rate as it did a year ago, took a step forward last week with a win over Miami (FL), but couldn’t solve a tough Florida State side on Sunday. This week’s action, against Wake Forest and Syracuse provides another opportunity for the Blue Devils to start building momentum in the ACC schedule.