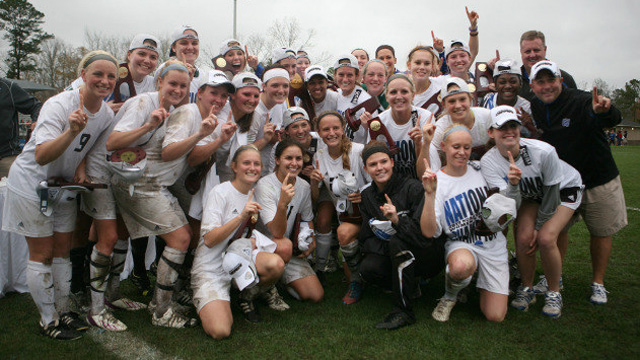 From Division I all the way to Division III, women’s soccer hit a thrilling crescendo last weekend. While UCLA was busy locking up its first national title on Sunday, DII and DIII women’s champs had already been crowned the day before.

Grand Valley State won its third national title with a 2-0 win over West Florida, while William Smith triumphed over hometown Trinity (Texas) by the same scoreline to win the Division III title. Here’s a look back at the final weekend in DII and DIII women’s soccer. 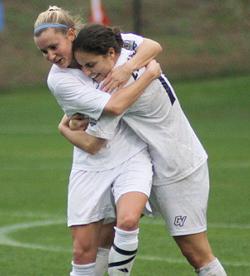 What happened: No. 1 Grand Valley State knocked off No. 2 American International 4-1 in one semifinal, while defending champ and No. 1 West Florida trumped No. 2 Western Washington 2-1 in the other. That set the Argonauts up to defend their title, but Grand Valley State was the better team on the afternoon. The Lakers pressed high and won a 2-0 victory to wrest the Division II title from West Florida’s grip. Freshman Marti Corby scored her 12th of the season in the 59th minute, and Katie Bounds put the capper on the game with a goal 20 minutes later.

Why it was noteworthy: Last weekend’s battle between Grand Valley State and West Florida was essentially the handing off of the baton of power. These teams have now combined to win four of the last five women’s Division II titles, with West Florida’s 2012 title standing as the last before this season. If the Lakers wanted to call themselves national champs again, they’d have to step over the body of the previous queen.

And so they did. Grand Valley State won its third national title on Saturday, all of which have come since 2009. Three titles in five years? That’s dynasty territory. The Lakers became just the third DII program to capture three or more national titles since the DII tournament got its start in 1988, joining Barry (3) and Franklin Pierce, which won four straight titles from 1994-1997 and then a fifth in 1999.

Grand Valley State got it done in the finale with its typical bravado, knuckling under West Florida with a crushing defensive display. The Lakers’ 2-0 win in the finale was their 21st shutout of the season and clinched an unbeaten 24-0-1 season. Their win and shutout totals matched Division II records. This time, Grand Valley State got its most substantive postseason contributions from Corby, a freshman who bucked the trend by scoring four goals in the NCAA tournament. With Corby’s help, the Lakers etched their five-year run in the new century as one of the greatest in DII history.

What happened: William Smith got a seventh-minute goal from Krista Long to advance past Capital in one semifinal, and Hannah Hommel scored in the 51st minute to give Trinity a 2-1 win over Middlebury on the other side of the bracket. In the final, William Smith shook off hometown Trinity with an 11th-minute goal from Madeline Buckley and another from Long in the 52nd to clinch the championship. Long was named the Tournament Outstanding Offensive Player for scoring twice in as many games in the final four.

Why it was noteworthy: While the other three teams had enough about them to make the DIII final four anything but a certainty, the location of the tournament made the title Trinity’s to lose. The school’s campus was 11 miles from San Antonio’s Toyota Field, where the semifinals and finals were held. William Smith’s campus in Geneva, N.Y. is 1,700 miles from San Antonio, meaning the crowd of more than 1,000 that packed in to see the final was decidedly in Trinity’s favor.

Trinity had the best record of any team in the final four, and the Tigers went into the finale without a loss on their resume. That didn’t last long. In spite of the partisan crowd and the favored opponent, William Smith overcame a 24-10 shots advantage in Trinity’s favor to escape with a hard-earned 2-0 victory and close the season with a 23-1-0 record.

The title was the second in program history and the first since 1988. Herons coach Aliceann Wilber is the only coach in the history of the program, and she snagged her second title trophy in her 34th season at the rudder. It was the first time the program had been in the final since a 1-0 loss to UC San Diego in 1997, and they made good on the chance despite being underdogs on the road. For Wilber, it was a sweet prize to capture after 25 years between titles.

"The great link between the two teams is leadership," Wilber told NCAA.com. "In 1988, we had superb leadership. We lost in the finals the year before, and that team said 'we are winning it next year,' and they never looked back. This team has been a very forward-thinking group. They have tremendous leadership and balance. In my experience, if you don't have good leadership, you become ordinary."