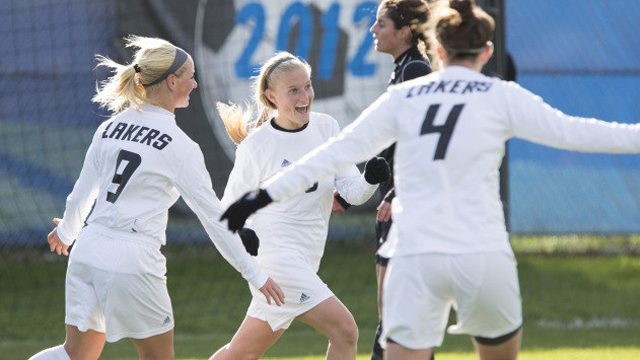 The women’s Division II and Division III tournaments are humming at top speed after opening with a bang last weekend. Both are down to the final 16, which will be whittled down to four by the end of this weekend.

The defending champs in both brackets are still alive. In Division II, West Florida is still moving and faces Rollins on Friday. Messiah, which has been to each of the last six DIII finals and won four of the last five, beat Lassell(w) and Amherst a combined 6-1 and faces Ithaca in the round of 16.

As for the rest of the tournament? Let’s dive in. 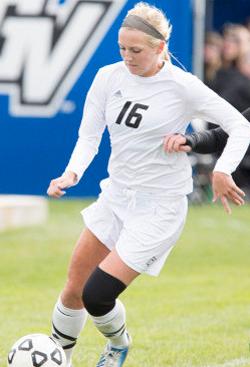 Life is tough at the top

If No. 1 seeds learned anything in Division II women’s soccer last weekend, it’s that your place in the postseason hierarchy doesn’t buy you comfort. In the top half of the bracket, top seeds went 1-for-4 in the second round of the tournament after receiving first-round byes. The only team to advance in that grouping was the end-of-season No. 1 Grand Valley State, which thrashed No. 5 Rockhurst 5-0 to advance to face No. 2 Quincy on Friday at 1 p.m.

That win almost assuredly cemented the Lakers’ hype as the team to beat in this tournament. Further, their pathway to the Final Four got a lot clearer considering they can get there without having to play another No. 1. Minnesota State-Mankato, Cal State Stanislaus(w) and Colorado Mines weren’t as lucky. All three No. 1 seeds lost their first game.

In contrast, the bottom half of the bracket went more or less as expected. Top seeds Wingate, West Florida, Saint Rose and California (PA) are all still dancing into the third round. Further, only one No. 2 seed didn’t make the third round, creating a bevy of high-powered matchups with a spot in the final eight at stake.

While No. 1 seeds fell across the board last weekend, Wingate made sure it didn’t succumb to the same fate. When a second-round meeting with Columbus State, a perennial tournament fixture, went to penalties, Wingate responded by making all five of its kicks to book a spot in the final 16 for the first time in program history. Should Wingate navigate past Belmont Abbey College, the Bulldogs could meet defending national champ West Florida. The new world paradigm the old.

Looking for a cinderella to bowl its way to an unlikely title one shocking upset at a time? Look no further than the duo of Southwest Minnesota State University and Metro State, the two lowest seeds left in the tournament at No. 5 and arguably the two best stories of the tournament.

In the second round, Metro State brought top seed Colorado Mines’ 34-game win streak (the fifth longest in NCAA Division II history) to a shuddering halt with a shock 3-1 win that also handed the Orediggers their first loss of the season. This was no fluke, either, as Metro State raced out to a 3-0 lead on one of the best teams in the nation. After losing four games in the regular season, upset about covers it.

Southwest Minnesota State followed suit with a 2-1 second-round win over rival Minnesota State-Mankato, picking a good time to get its first win in the series in program history. Morgan Weyer-Coates’ goal in the 83rd minute handed the team the win and broke Minnesota State’s incredible 36-game home winning streak.

This weekend, Metro State will face St. Edward’s(w) from Austin, Texas, while Southwest Minnesota State tackles another in-state foe in Minnesota Duluth for the right to head to the final eight.

There are a number of ways to advance in the tournament. Just so happens Puget Sound opted to take the most stressful path possible. The Loggers, who entered the postseason 15-2-2, faced the daunting task of facing California Lutheran and Hardin-Simmons in back-to-back days to advance to the third round.

They certainly didn’t make it easy, winning both with single goals in double overtime for a pair of nervy 1-0 wins. The second win was perhaps most impressive, a 102nd-minute goal from Amalia Acorda-Fey giving the Loggers the win over a Hardin-Simmons team that had only lost once all year.

Things don’t get easier. Puget Sound now faces Washington (Mo.) with a spot in the final eight on the line. One of the hottest teams in the country, Washington is tied with Williams and Montclair State for the DIII women’s tourney lead in goals scored so far with eight.

Looking for the best games on the Division III women’s slate this weekend? Look no further than a pair of contests on opposite ends of the country this weekend in Vermont and Texas.

On the top half of the bracket, rolling Montclair State flies down to San Antonio to square off against Trinity (Texas) in arguably the most anticipated matchup of the entire tournament so far. The two teams are a combined 42-0-3 this season, though they took wildly divergent paths to get here. While Montclair State pounded Bowdoin 7-1 in the second round, Trinity needed an 82nd-minute goal to draw even with Illinois Wesleyan before winning in a shootout. Set your watches for 5 p.m. Friday.

Finally, be sure to watch out for Johns Hopkins-Williams battle on the bottom half of the same side of the draw. Johns Hopkins, an Elite Eight team from last year, has scored seven goals in its first two tourney games. Williams, meanwhile, is rolling with eight goals over the same span, tied for the tourney lead.