Any time a team can depart the state of North Carolina with an unblemished record, it’s the sign of a positive trip. And the Florida Gators were able to achieve that with a huge 3-2 come-from-behind win over Duke on Sunday.

“It was just a much-needed win and confidence boost for this team,” UF head coach Becky Burleigh said in a release. “We overcame a lot in this game. After going to overtime in a battle with North Carolina Friday night, to be able to have the legs to go into overtime today and win this after overcoming a two-goal deficit shows the character this team has.”

The win came on the heels of a 0-0 draw against the Tar Heels Friday night. Senior All-American Erika Tymrak scored the winner in overtime over the Gators.

Success has been elusive for Greg Ryan’s Wolverines of late, so it was a refreshing accomplishment for Michigan to wrap up this weekend with two more wins, finishing a four-game home stand with four wins.

A 1-0 win over Detroit(w) closed out the opening stretch, as freshman Corinne Harris scored the winner, her first collegiate goal. The Wolverines will look to keep the good times rolling on a west coast trip next weekend.

The rigors of the ACC schedule remain on the horizon, but the Eagles continued to pick up quality out of conference wins early on in the season.

This time, it was a pair of wins against two teams not too far away, with a 4-3 defeat of No. 25 Connecticut and a 3-1 win against No. 47 Boston University. Freshman McKenzie Meehan scored twice in the defeat of UConn, while sophomore Stephanie McCaffrey the two-goal hero in the win on Sunday. A huge west coast trip looms this coming weekend for the Eagles, including a visit to Stanford.

Kaitlin Brenn leads No. 15 Georgetown to a pair of wins 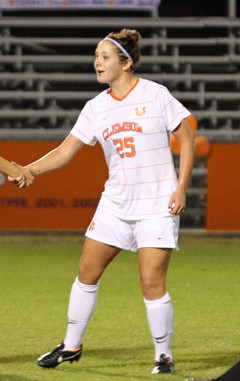 No Ingrid Wells? No problem for the Hoyas, as Georgetown ran their win streak to four in the early stages of the season with two more wins at the JMU Invitational in Harrisonburg, Va.

Junior forward Kaitlin Brenn was the star of the weekend, scoring the game winning goal in a 1-0 defeat of James Madison on Friday night, before opening the scoring in a 2-1 win against Hofstra. Sophomore midfielder Daphne Corboz netted the game winner.

No. 11 Virginia bounces back from opening weekend loss

After opening the season with a tough 3-1 loss at home against No. 10 Penn State, the Cavaliers extended their winning streak to three games over the weekend thanks to a 2-0 defeat of UNC Wilmington.

With head coach Steve Swanson coaching the U20 WNT in Japan, assistant coach Ron Raab continued to guide the team, and after a bit of an opening hiccup, things appear to be on track.

"It was a good team victory as we had a good effort all around," Raab said in a statement. "We played some great soccer in the first half, but were not rewarded with a goal. We continued to pressure them in the second half and got a couple of good finishes by players who have been playing well for us all year long."

Freshman Makenzy Doniak continued a strong start to her college career with a second half goal, taking her impressive early season tally to 5 goals and 2 assists – all while yet to start a game this season. She was also honored as our Player of the Week.

While they’ve yet to reach the meat of the schedule, Mississippi extended their winning streak to four games with a 1-0 victory over visiting Louisville-Lafayette. Rafaelle Souza, who bagged the winner, is a big part of the early success as she now has four goals in that four-game stretch.

With the winning streak, Ole Miss has already won half has many games as they did in 2011, and Souza will continue to play a big role as the season progresses. The Rebels face Arkansas-Little Rock(w) and Texas Tech this weekend.

With a win and a loss over the past weekend, the Clemson Tigers once again find themselves starting the season in positive fashion.

The 2011 season began with four consecutive wins, before the ACC schedule ran the season off the rails. In around the same spot as they were last year, Eddie Radwanski’s Tigers are now 3-1 after losing 1-0 against Furman on Friday, before bouncing back with a 6-0 defeat of Presbyterian on Sunday.

Katelyn Reeve led the team with two goals on the day in the win – now Clemson is faced with the task of keeping things going against in-state rivals South Carolina on Saturday.