Women’s Field Down to Eight With a pair of victories in the women's college soccer NCAA Tournament, Stanford remains at #1 in the TopDrawerSoccer.com Tournament 64 National Ranking this week, 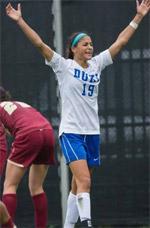 The ranking is an effort to project the postseason NCAA Tournament field of 64 each week, including the automatic qualifiers from every DI conference. Once the tournament begins, the ranking reflects the actual results of the tournament.

Stanford is followed by BYU, which defeated previous #4 Marquette after 110 minutes of scoreless play and 8 rounds of penalty kicks. Florida State, Penn State and Duke follow at #3-5.

Meanwhile, Duke’s Kim DeCesare is our TopDrawerSoccer.com women’s college soccer Player of the Week after she scored 2 goals in each of the Blue Devils’ tournament wins this week. Recipients of the honor, along with the entire Team of the Week, are chosen after examining Division I match summaries each week.

GK: Erin McNulty, Penn State – With her team down 2-0 in post-match PKs McNulty saved three consecutive spot kicks to lift her team to the elite 8 in a victory over Michigan(w).

D: Lindsi Lisonbee Cutshall, BYU – Anchored the back line for 200 minutes of play as the Cougars took a tight shutout win over Auburn and bested Marquette on penalties after a scoreless draw.

D: Katie Naughton, Notre Dame – Went 180 minutes in the back line to help the Fighting Irish to a pair of tournament wins.

D: Rachel Quon, Stanford – Standout in the back and on the flank as the defending national champions won a pair of matches.

D: Lucretia Lee, UCLA – Went 180 minutes in the back in a pair of shutout wins for the Bruins.

M:  Nicholette Digiacomo, Denver – Scored a dramatic hat trick to defeat Maryland in the second round 3-2, incuding a tying goal in the final minute of regulation and a golden goal in overtime.

M: Christine Nairn, Penn State – Scored a goal and added 2 assists as the Nittany Lions won twice and advanced to the final 8.

F: Caroline Miller, Virginia – Scored 3 goals and added an assists in two games for the Cavaliers.

F: Tiffany McCarty, Florida State – Scored 3 goals and added an assist in a pair of Seminole wins, with one of her goals an overtime game-winner against Texas Tech.