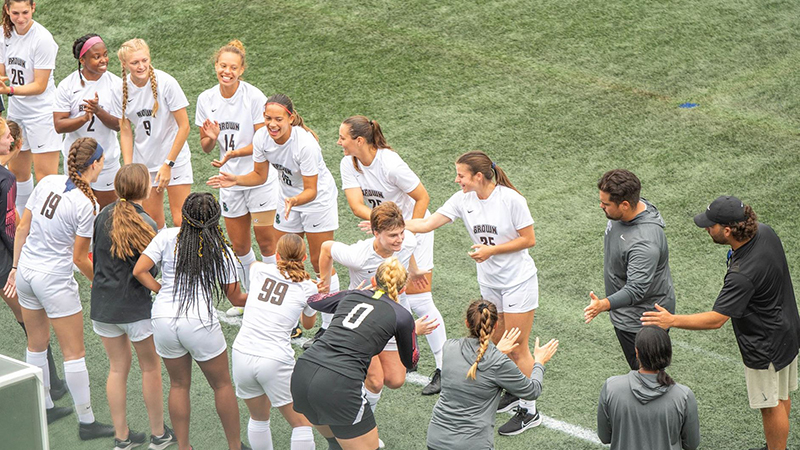 Big games are on the schedule this weekend as the women’s Division I season continues. Don’t miss these five matches available to watch (all kick off times listed EST).

For those living up and down the East Coast, there’s a shot to catch one of Florida State’s biggest tests of the season (before visiting UNC next week). In six ACC games so far, the Seminoles have scored 25 and conceded just three goals. Traveling to Blacksburg won’t be easy, even if FSU is still the favorite here. The Hokies have enjoyed some success, looking good on the road against North Carolina earlier this year, and will key in on stopping Jenna Nighswonger, Beata Olsson and Clara Robbins to name a few. Emily Gray has enjoyed a stellar year so far for Tech, and if she’s able to wriggle free from Jaelin Howell, it could set the table for a Hokie upset. A big game will also be needed from goalkeeper Alia Skinner to give the host side a shot.

USC currently leads the charge in the Pac-12, with the Bruins sitting a few points behind after drawing a couple of games in league play. That makes this trip up to Covallis extremely important for UCLA, especially ahead of a two-game swing to Washington the following week. Finding a clinical edge will be important for UCLA as the big games pile up. Marley Canales providing the winning goal last time out, providing another option along with Mia Fishel and Reilyn Turner. The Beavers have proved that they can give the perennial powers of the Pac-12 programs, beating Stanford earlier this season in California. McKenna Martinez, Brianna McReynolds and Amber Jackson can give the UCLA defense problems, while Bridgette Skiba is a quality shot-stopper that can bail out the defense.

The Big 12 title race is there for Texas’ taking, with a handful of big games left. A trip to Waco presents the next challenge for a young team that is growing into a solid squad as the season progresses. Lexi Missimo, Trinity Byars and Julia Grosso form a quality attacking trio, combining for 22 goals and 21 assists in 14 games so far. Emily Jane (EmJ) Cox has provided an anchor at the back in front of goalkeeper Savannah Madden. Baylor looked on course to challenge Texas before a loss and a draw last week, and can use this return home as a way to right the ship. Jennifer Wandt is a savvy goalkeeper and will look to thwart that offensive trio while Mackenzie Anthony and Taylor Moon search for attacking breakthroughs.

Another week, another potential Ivy League decider. After besting Princeton on home turf last weekend, Brown hits the road for Cambridge and will look to hand Harvard a first loss of the season. Quality abounds on both sides, and there is little that separates them. Brittany Raphino and Ava Seelenfreund have been two of Brown’s best attacking players, while Kayla Duran offers quality at the back in front of goalkeeper Kayla Thompson – a potential All-American. The Bears have the experience edge, as the Crimson have excelled with several first-year players playing the bulk of the minutes. However, Angela Caloia leads the way with eight goals and her attacking quality will be crucial along with Josefine Hasbo and Hannah Bebar. The winner here (if there is one) won’t officially win the Ivy League, but would take a big step towards that.

While it was expected to see UVA, UNC and FSU lead the way in the ACC, Notre Dame’s put together a sensational campaign to this point. The Irish enters this clash tied for first place with the Seminoles with a 6-0 record. A trip to Charlottesville kicks off a tough stretch of league matches for the visitors, as tests against Duke, North Carolina and Wake Forest will wrap the regular season. If ND is to come away with a win or draw, freshman Korbin Albert will need to continue her high level of play alongside Sammi Fisher. UVA isn’t quite the same kind of threat with the season-ending injury to Rebecca Jarrett, but the team remains unbeaten in its last seven games with six wins during that stretch. Diana Ordonez, Haley Hopkins, Alexa Spaanstra and Lia Godfrey still offer ample options in the final third, and has the firepower to overwhelm any defense in the nation.