Conference tournaments are underway around the country, as the women’s college soccer season steams towards Monday’s selection show.

By this Sunday, all conference bids will be locked up before programs learn their NCAA tournament fate. All eyes then shift towards the tournament, and the season’s final run up to the College Cup. 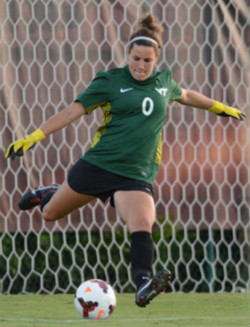 Here's a look at five conference tournaments to keep an eye on this weekend:

Could the ACC tournament semifinals provide a preview of the College Cup later this year back in Cary? It’s a possibility – depending on the bracket of course – as there’s no doubting the quality of the four-team field.

It starts with Virginia, however, as it’s impossible to pick against the top team in the country. Riding a 20-game winning streak, the Cavaliers are the best team statistically in the ACC in goals scored and allowed. Midfielder Morgan Brian runs the show from her attacking midfield slot, though top talents like forward Makenzy Doniak, midfielder Annie Steinlage and defender Emily Sonnett offer plenty of balance.

The Commonwealth rivalry will kick things off, as Virginia Tech look to avenge last week’s 2-0 loss in Charlottesville on Halloween. The Hokies don’t necessarily have one dominant force on their squad, instead striking a blend on both ends of the field for their success. They do have weapons in the final third, such as Jazmine Reeves, Ashley Meier, and freshman standout Murielle Tiernan who can break a game open, while senior goalkeeper Dayle Colpitts is an underrated option inbetween the posts.

Friday’s other semifinals pits two clear College Cup contenders, as North Carolina looks to avenge an earlier loss this season against Florida State. Senior standouts Kealia Ohai and Crystal Dunn are the two names every thinks of when examining the powerhouse Heels. Experience defenders Kristin Grubka and Kassey Kallman form an extremely tenacious center back partnership for the Seminoles that will look to shut down UNC, paving the one for one of their Icelandic stalwarts, Dagny Brynjarsdottir and Berglind Thorvaldsdottir, to possibly emerge as the hero.

Riding a 16 game unbeaten streak entering the conference tournament, the Knights are the favorites here, especially thanks to Memphis, which ousted Louisville in the previous round. A number of UCF players can do some damage, including forwards Tatiana Coleman, Lena Petermann and midfielder Kayla Adamek. All American center back Marissa Diggs holds down the defense, while Lianne Maldonado is a steady option in goal. First up will be Florida rivals South Florida, a team that can certainly cause trouble. They’ll look to Olivia Chance, Sharla Passariello and Cristin Granados to try and engineer the upset.

On the other side, the Tigers won’t be an easy out for Rutgers either. Led by the high-scoring attack of Canadians Christabel Oduro and Valerie Sanderson, Memphis faces a must-win scenario in order to keep dim NCAA tournament hopes within range. Rutgers won the earlier season affair 3-2, and this could be another shootout, as the Scarlet Knights have plenty of firepower as well. Stepfanie Scholz is a scoring threat off the bench, while the experience Jonelle Filigno – a full Canadian international – looks to wrap up her college career in style.

It’s been predominately a two-team race in the new-look Big East for most of the season, although the Golden Eagles ran the table and would contend it was more of a one-team act. It’s no secret that Marquette and Georgetown are the favorites to reach Sunday’s title game, but first they each have difficult obstacles to bypass. Thanks to a slew of blowouts, Georgetown has the second highest scoring team in the nation, based off goals per game ahead of Friday's semifinal. That success mostly comes from creative maestro Daphne Corboz, whose elegance on the ball is matched by few at this level. That said, the team is stocked with experience and quality, and seniors like Kaitlin Brenn, Emily Menges and Colleen Dinn are going to be tough for DePaul to slow down. The Blue Demons will look to slow the Georgetown attack through their solid defense, and hope Elise Wyatt can plunder a goal or two.

The other side of the Big East bracket should serve up an enthralling match as well, as Marquette, which host the tournament welcome St. John's for a rematch of an early October win. The Golden Eagles are riding an eleven game winning streak, and can do damage with Maegan Kelly, Mary Luba, Taylor Madigan or Mady Vicker. Along with the vengeance opportunity, the Red Storm can solidify its conference hopes with the upset here. Sophomore English forward Rachel Daly has had no problem making the transition to this level of soccer, currently topping the DI ranks with 22 goals. If she can add to her haul in Milwaukee, the New York program would be more than capable of the upset.

Prediction: Marquette, Georgetown setup the top two showdown, with the Golden Eagles coming away with another tournament title.

After tripping up Michigan in the quarterfinals, the Hawkeyes move on to face Penn State in a weather-impacted Big Ten tourney. Action was shuffled around on Wednesday, though shouldn't be an issue for Friday as the Nittany Lions aim to claim the tournament crown after missing out on a regular season. Cloe Lacasse represents the significant danger option for Iowa, which certainly has momentum after sprining the upset over the Wolverines and is hoping to solidfiy tournament hopes. They'll need to find a way to slow down Penn State's potent attack, led by Maya Hayes, Taylor Schram, Mallory Weber and Raquel Rodriguez Cedeno. Look for this semifinal to be a bit on the high-scoring side, provided the Hawkeyes can keep up.

Aiming for the double this weekend, and a high seed in the NCAA tournament are the Huskers. Winners of six straight, they have quality and depth in several spots on the field. Up front, Mayme Conroy, Jaycie Johnson and Jordan Jackson have each netted at least eight goals a piece, while Ari Romero has been a defensive stalwart in front of steady goalkeeper Emma Stevens. Standing in Nebraska's way is an Indiana side that has put together a memorable season. While the men's program has struggled this season, the Hoosier women look in line for a tournament bid. Lisa Nouanesengsy's 11 goals has been a big part of that success along with Rebacca Candler's quality play, and they'll look to lead Indiana into the Big Ten conference title game.

Certainly the focus is going to be on the ACC tournament, but the SEC has a pair of quality encounters that should produce a couple of entertaining affairs. The meeting of Florida and Mississippi could produce goals aplenty, as the Gators are led by high-scoring freshman sensation Savannah Jordan and the experienced Havana Solaun. They're not too shabby at the back either, having conceded only 11 goals being stellar play at the back, including Christian Westphal and Karina Gutsche. That defense is sure to get tested against the Rebels, which boast a formidable offensive duo of Rafaelle Souza (19 goals, 6 assists) and Mandy McCalla (13 goals, 5 assists).

On the other side of the bracket, the meeting of South Carolina and Texas A&M signifies a meeting of the two sides for the first time in 2013. The Gamecocks have put together an all-around quality campaign, and a lot of it starts at the back with goalkeeper Sabrina D'Angelo. The Canadian international recorded her 11th shutout of the season in Wednesday's quarterfinal win, a huge asset for a team that has scored only 33 goals on the season. If the matchup with the Aggies becomes a shutout that might bode well. The Texas side has the firepower to put up several goals a game, as Shea Groom, Elizabeth Keester, Allie Bailey and Kelley Monogue all able to supply a spark. And A&M has a goalkeeper who is no slouch of her own in Jordan Day.