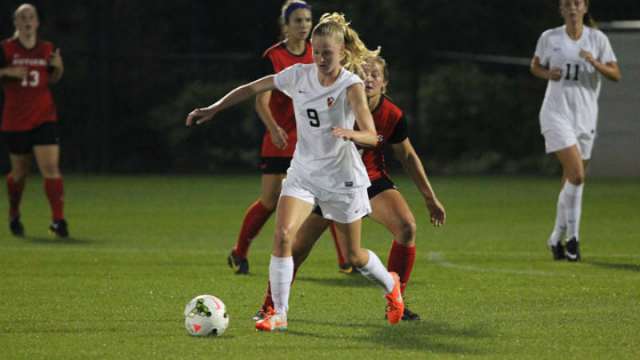 The implications are staggering this weekend as big games span the country. Below are five games to watch, along with a trio of players to keep an eye on over the next few days.

The Ivy League title race could come down to this Saturday’s clash between the two perfect sides in conference play, as Princeton makes the trip to Cambridge. Both teams are in flying form – Princeton is riding an eight-game winning streak, while the Crimson has bagged five straight. A high-scoring game could be on the cards as well, as Princeton boasts the double-barreled offense led by Tyler Lussi and freshman sensation Mimi Asom. Harvard’s success lies more at the back, conceding 13 goals at this point in the season, while Margaret Purce’s eight goals accounts for exactly half of the Crimson’s scoring output in 2015. Regardless of how it plays out, it’ll be a tightly contested affair as both teams chase a championship.

Four games are left on the West Coast Conference schedule for each team (including this critical matchup on Saturday), so while BYU’s visit to Santa Clara may not be a title decider, it could go a long way in dictating who wins the regular season crown. Santa Clara and BYU are currently tied at the top of the standings with 12 points, but San Francisco shockingly holds the edge with wins over the two programs. Both teams here are safe for an at large bid with very solid RPI numbers, though a conference crown is a big prize to be chasing. The matchup to watch here is the vaunted BYU attack, led by Ashley Hatch, Nadia Gomes and Elena Medeiros, against Santa Clara’s solid defense. Bronco goalkeeper Andi Tostanoski has only conceded nine goals from 16 matches and will be celebrating senior night in front of her home fans.

Virginia’s dream season in 2014 came with one hurdle the Cavaliers could never clear: Florida State. All three of their losses came at the hands of the Seminoles, in the regular season, ACC tournament championship and the national title game. Sunday’s matchup is an opportunity for revenge, albeit on a smaller scale. Three points for Virginia would vault them into first place in the standings after FSU drew Virginia Tech on Thursday. Both teams will deal with international absences, as Natalia Kuikka, Emma Koivisto and Megan Campbell are over in Europe, while UVA center back Emily Sonnett received a call-up to the U.S. Women’s National Team. Makenzy Doniak will be critical here, as the talented forward was in the lineup the last couple of games, but did show signs of rust against Louisville as she battles a hamstring injury.

The Hoyas travel to Chicagoland with the opportunity to gain the inside track on a Big East regular season title. The Blue Demons dropped their first conference game of the season on Thursday at the hands of Providence, but can bounce back into the driver’s seat if they can see off the challenge from Georgetown. There should be plenty of goals in this one, between Georgetown’s midfield maestro Rachel Corboz and the DePaul core of Elise Wyatt and Alexa Ben.

Given the new format of the ACC tournament, anytime two ACC powerhouses clash, the stakes are all the higher. The Tar Heels are still outside the top four picture despite a massive win against Notre Dame on Thursday night, snapping a three-game losing streak. While season-ending ACL injuries to Darcy McFarland and Dorian Bailey cast a certain level of doubt over their end of season prospects, they have the depth and quality to take the game to a physical Clemson side. Goalkeeper Kailen Sheridan has missed the past two games for the Tigers after suffering an injury against Virginia Tech on October 11, and her involvement could be a decisive factor on Sunday.

F Arielle Ship, California – A big trip to the Pacific Northwest is on the docket this weekend for the Bears, who are looking to keep pace with Stanford and USC in the Pac-12 race. Ship’s been in great form for long stretches of the year, and with tough matches against Washington and Washington State this weekend, a big performance would go a long way to a seed in the NCAA tournament and a shot at a regular season title.

F Addie Steiner, Northwestern – The Wildcats have found the formula that has them on the cusp of an NCAA at-large bid. And while they aren’t quite safe yet, beating an Illinois team that’s just behind them in the RPI is critical to those hopes. Steiner’s five goals and six assists leads the team in both categories and she’ll be needed against the Illini on Saturday.

M Casie Ramsier, Auburn – While Florida is pulling away towards the SEC regular season crown, the Tigers are one of the programs able to keep the pressure on. Ramsier, who has been excellent all year long, needs a big weekend against Georgia and Kentucky as Auburn seeks to keep pace with the league leaders.