Women's preview: When the West was won On Sunday, it will be nearly four years to the day since the last time UCLA defeated Stanford.

Since then, Stanford has ended the Bruins season twice in the postseason and stopped its undefeated bid in the regular season.

It has been a one-sided rivalry over the last few years with Stanford mounting a five-game winning streak. 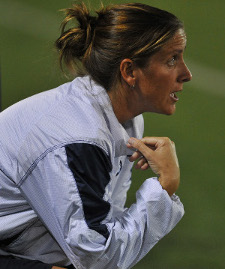 These have not just been conference fixtures. The Cardinal has bossed around the Bruins on the big stage too including a victory in the 2009 College Cup and a win in the 2010 NCAA Tournament Round of 16.

Of course over this stretch of supremacy, the program from Palo Alto has also won the Pac-10/12 Championship three times and made the College Cup Final twice before winning the NCAA Division Championship in 2011.

Will the dominance finally end this weekend when the #1 Stanford Cardinal (14-1-1) travels to Westwood for a showdown with the #2 UCLA Bruins (14-0-2)? Does UCLA have what it takes to get some revenge against the Pac-12 Bullies?

On paper, these teams are built in a similar fashion with a number of talented players (with impressive international resumes) dotting every position on the field.

U.S. U23 Women’s National Team forward Zakiya Bywaters leads the Bruins in scoring with 11 goals and three assists on the campaign.

Fellow U23 WNT forward Courtney Verloo tops the scoring chart for the Cardinal with six goals and eight assists. The redshirt junior is enjoying her best collegiate season one year after a back injury kept her out of action during Stanford’s title run.

Defensively, UCLA, statistically, has the slight advantage with only six goals conceded this season, but that is hardly applicable when considering Stanford’s potent diverse attack.

During this four-year losing streak, the Bruins have been outscored 13-2 in the five meetings between these two teams. UCLA sophomore goalkeeper Katelyn Rowland, who is fourth in the nation in goals against average (0.34), let in four goals in the first half in last season’s meeting before being subbed out at half.

How Rowland responds to her first meeting with Stanford since that result is a major part of the narrative on Sunday. The Bruins will need her to be sharp to keep the dream of a Pac-12 Championship alive.

Rest of the Top Five in action

Florida State (15-1-0) closes out its regular season with a road contest against Miami (FL) (8-6-3) on Thursday. The #3 Seminoles have already clinched the top spot in the ACC conference tournament.

Katie Stengel and the #4 Demon Deacons of Wake Forest (13-3-3) closed out their regular season with a loss to Virginia Tech on Wednesday.  The ACC Championship starts on Sunday.

Erica Walsh’s Penn State Nittany Lions travel to Purdue on Friday to wrap up their regular season. The #5 Nittany Lions have already locked down the top seed in the Big Ten tournament and are looking to finish the year undefeated in conference play.

Bubble Watch – the TopDrawerSoccer.com Tournament 64 predicts which teams will make the Big Dance, but the bottom teams are fairly fluid during this period and one negative result could drop a team from postseason aspirations to early season snowboarding.

Golden Boot – East Tennessee State’s Ramey Kerns leads the nation in scoring with 20 goals, but Minnesota’s Taylor Uhl (19 goals) and Furman’s Stephanie DeVita (18 goals) are right on her heels going into the final weekend of the regular season.