Many expected a drop off this year for the Georgetown Hoyas after the departure of a number of key, experienced players after the 2011 season.

Instead, a group of young, but extremely talented and hungry players has stepped up and exceeded expectations. Over the weekend, they clinched a Big East National Division title with a 2-0 victory against #10 Notre Dame on Friday and a narrow 1-0 win in overtime over DePaul the following Sunday.

"It's a great reward for the kids for all the work they put in," Georgetown head coach Dave Nolan said after the DePaul win. "Every year, I challenge our team to make their own history and leave their own legacy. The 2010 team did it and the 2011 team did it and those were special. I told this group not to make someone else's legacy, but create your own and do something no one else has done."

By clinching the division title, the Hoyas picked up their first-ever regular season accomplishment, and seal a #1 seed in the upcoming Big East conference tournament, set to kick off next week. 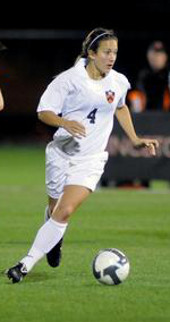 One of the keys to the successful season has been the transformation of the Hoyas from an offensive juggernaut into a tight, defensive-minded team. During a nine-game unbeaten run (eight of those wins), Georgetown has conceded just one goal during that stretch.

But it’s not as though the team struggles to score goals. Sophomore midfielder Daphne Corboz has provided the bulk of the offense with 16 goals and 8 assists – tied for the most goals in the nation – while junior forward Kaitlin Brenn has 9 tallies and 8 assists.

The combination of the two will make the #5 Hoyas quite the team to contend with come tournament time.

Not only does #1 Florida State refuse to lose, the Seminoles offer up the nation’s best defense.

The top-ranked team in the country picked up another pair of 1-0 home results over the weekend. After a 1-0 win over Virginia Tech on Thursday, FSU followed it up with a 1-0 defeat against Virginia this past Sunday.

"That was a real hard fought game for us," head coach Mark Krikorian said in a release. "Virginia gave us everything that we could handle. We knew that the game on Thursday night against Virginia Tech was a tough game; we had to battle for 90 minutes. Coming back against a very good Virginia team today, we knew they would push us to the limit. Fortunately in the end, we did enough to create a chance and get a penalty and Ines [Juarez] buried it."

The numbers are very impressive with regards to Florida State. With two more shut outs, the Seminoles have now posted nine straight clean sheets, the 12th overall on the season. In their 14 games so far this season, they’ve conceded only three goals on the year.

With three more games in ACC play, the Seminoles continue their march towards a conference crown and aiming for a College Cup spot this week.

One year after failing to even put together a winning season, #39 Princeton has bounced back in a big way.

After a narrow 2-1 win over Columbia on Saturday, Julie Shackford’s Tigers extended their record to 4-0 in the League and have the team well positioned for the regular season title that clinches a tournament berth.

Forward Jen Hoy has been a key figure in the turnaround, as her 15 goals on the season has her among the national leaders, and just under half of Princeton’s 35 goals on the year.

Of course, the race for the Ivy League is far from over – Dartmouth and Penn trail the current leaders by three points, with the Quakers and Tigers scheduled to play in the final game of the season in early November.

Michigan keeps raking in the wins

While Penn State looks primed for another Big Ten regular season crown, the Wolverines kept themselves in the thick of things with another crucial conference win.

This time, #20 Michigan was able to best Purdue 2-0 on Sunday, maintaining their unbeaten record in the Big Ten, and also staying course for the October 21 meeting at Penn State that will be a must-win for the Wolverines if they want to win the conference regular season title.