Following Oklahoma State’s 0-0 draw with Baylor (11-1-4) on Sunday, Cowgirls senior defender Carson Michalowski summed up how many on the team feel during this rough spell of results.

“We played hard, and it stinks that we didn’t come out with a win,” Michalowski said.

Oklahoma State (10-4-3) started the year at #9 and climbed as high as #5 before they plummeted out of the Tournament 64 rankings this week.

The door has not closed on the Oklahoma State season though. With eight teams making the Big 12 Championship, there is plenty of opportunity to make up lost ground late in the season.

The #2 Cardinal returns to action this Thursday with a game against Washington State (9-4-1). 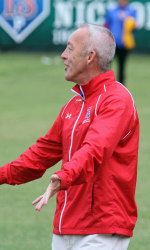 The seven-day layoff is a chance for Stanford to catch its breath during the normally-rapid pace of games in the short college season. Prior to this week off, Stanford played six conference games in 18 days.

Now, Paul Ratcliffe’s side finishes the year with five games in 24 days prior to the start of the NCAA Tournament on November 9.

UCLA (12-0-2) wrapped up its five-game conference road swing on Friday with a 1-0 win at Washington (9-4-2). The #3 Bruins play their next four games at home before finishing the season with a cross-city rivalry clash against USC on November 2.

Besides the USC game, every opponent the rest of the way for the Bruins has a winning record yet the games all feel like a buildup to the game against Stanford on October 28, which will likely decide the Pac-12 title.

San Diego State pushed its winning streak to seven games on Sunday with a 3-1 win over Fresno State.

Senior Megan Jurado, the TopDrawerSoccer.com Player of the Week, has been the key to the success offensively with 12 goals and seven assists this season. Sophomore Rachel Boaz has been equally as good defensively for San Diego State with only nine goals conceded in 1436 minutes.

There are a many reasons why Louisiana Tech (12-1-3) does not appear on any national ranking. The main liabilities come with Tech’s conference (Western Athletic Conference) and the lack of quality opposition (only three wins against teams with winning records).

Yet, the Lady Techsters are the best Cinderella story in college soccer this season. As of last week, the second-place team in the WAC had improved 141 spots in the latest RPI compared to its finish from last year.

LA Tech came in at #90 in last week’s poll, still outside of the NCAA Tournament, but hope is still alive for the first berth in program history.

"I am so proud of this team," head coach Kevin Sherry said after the win. "To play with only 10 for the better part of an hour on a very hot day, on turf and on the road is so mentally and physically tough. The ladies ran themselves into the ground for the team."

It’s not midnight yet for the Lady Techsters.